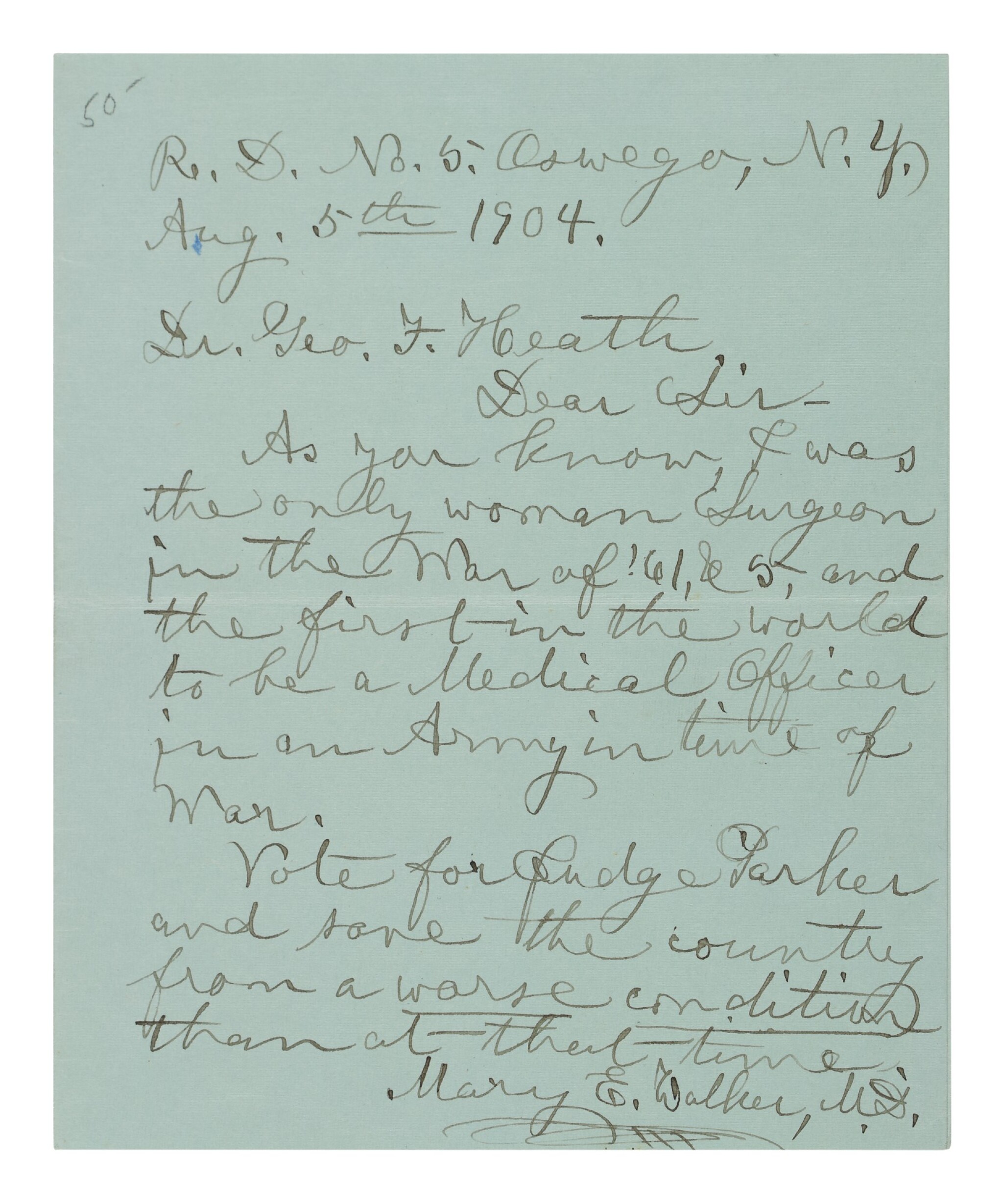 Two letters from the pioneering women's rights advocate, the first and only woman to receive the Medal of Honor for her field service during the Civil War

Dr. Mary Edwards Walker (1832-1919) was a pioneering surgeon and reformer, thought to be the only woman surgeon formally engaged for field duty during the Civil War. At the war's outbreak, she traveled to Washington, D.C., and worked as a volunteer nurse until she could gain a regular appointment, and in September 1863 she was appointed assistant surgeon in the Army of the Cumberland. Walker often crossed battle lines to care for soldiers and civilians, and in April of 1864 she was captured by Confederate forces. She was held as a prisoner of war in Richmond for four months before being released in a prisoner exchange. After leaving government service in 1865, she became the first, and only, woman to be awarded a Medal of Honor.

After the War, Walker became a writer and lecturer, speaking on issues such as temperance, women's rights, and dress reform — the last of which held particular importance to Walker, who held that "The greatest sorrows from which women suffer to-day are those physical, moral, and mental ones, that are caused by their unhygienic manner of dressing!"

The first letter places Walker in the midst of one such tour, writing to an English admirer just one year after the end of the Civil War. Her penchant for masculine dress was alienating to fellow Americans, and she received a more favorable reception in England: "I have made no arrangement 'to lecture in your city.' I was much pleased with the inhabitants, while there in October. No one could be more gentlemanly than the 'Medical Students' were, in Manchester."

The second letter is addressed to Dr. George F. Heath, a leading physician and thrice-elected Mayor in Monroe, Michigan. A lifelong coin collector, Heath founded the American Numismatic Association in 1891, and made numerous and important contributions to the hobby. Here, Walker appeals to their professional kinship, listing her credentials in the field of medicine before going on to advocate for Alton Parker's doomed Presidential bid:

"As you know, I was the only woman Surgeon in the War of '61&5, and the first in the world to be a Medical Officer in an Army in time of War. Vote for Judge Parker and save the country from a worse condition than at that time."

Though he would lose in a landslide to incumbent Theodore Roosevelt, it is readily apparent why the candidate appealed to the women's rights advocate. During his time as Chief Judge on the New York Supreme Court, Parker had demonstrated humanitarian and progressive leanings, particularly when it came to labor and social reform issues.

Walker was stripped of her Medal of Honor by Congress in 1917 on a technicality, though she refused to surrender her medal, and continued to proudly wear it through the end of her life. It was posthumously restored by the Army in 1977 under the Carter administration.