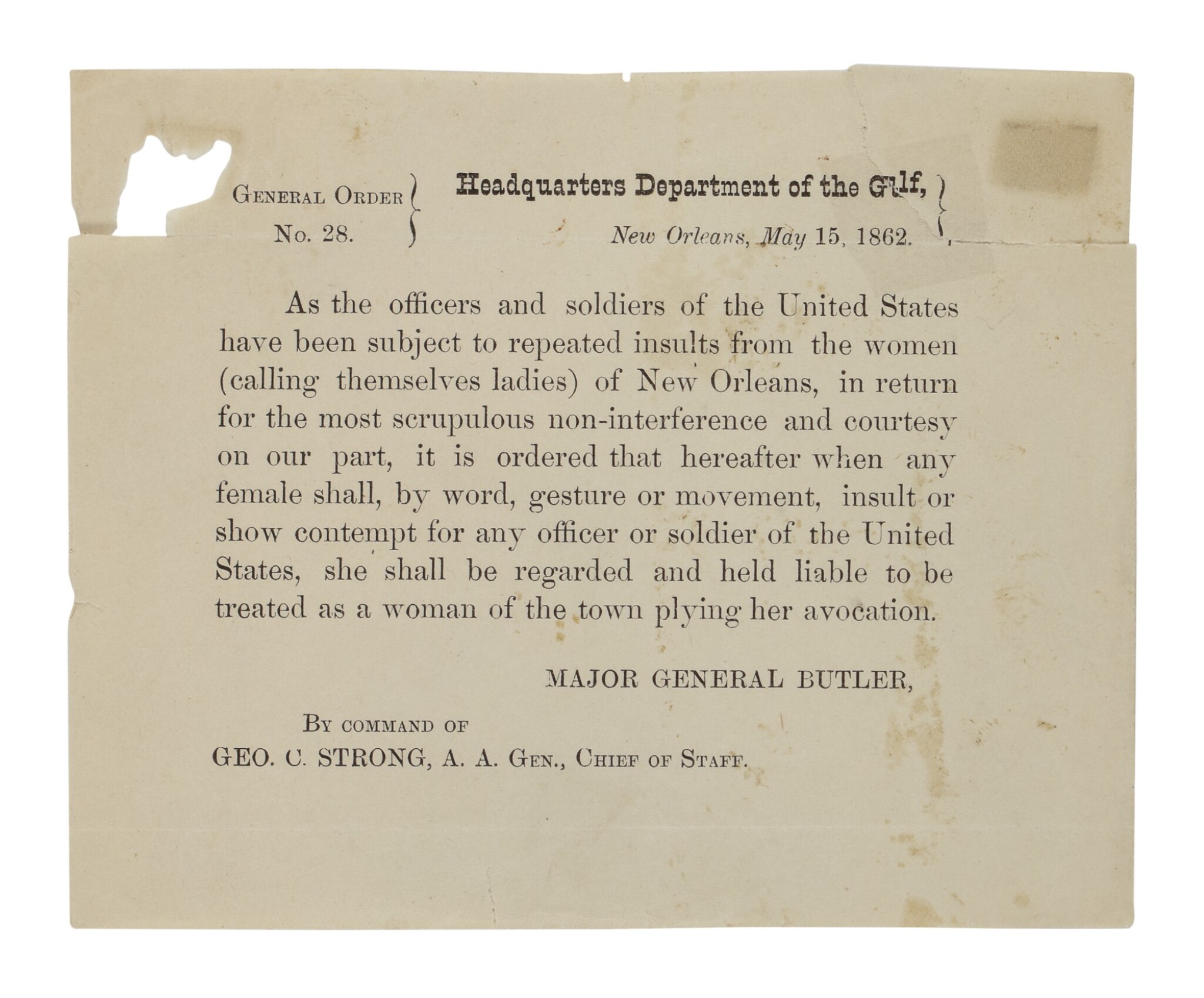 The occupation of New Orleans by Union forces under the command of Benjamin Butler was not welcomed by the citizens of the Crescent City. As Jacqueline G. Campbell recounts, "The 'she-adders' of New Orleans were quick to make known their dislike of Yankee soldiers. Reports soon flooded Butler's desk that women spat in soldiers' faces, made insulting gestures,r and took great pains to hold their skirts aside 'as if [they] feared they would be contaminated if they touched the soldiers.' One woman who fell refused the assistance proffered by two officers, claiming 'she would rather lie in the gutter.' Others would get off a street car if an officer got on board showing 'every sign of disgust, abhorrence, and aversion.' The final straw for Butler was when Admiral Farragut was walking through the streets and felt what he at first believed 'a sudden and heavy shower … [which] proved to be emptying of a vessel of water … from the balcony above, and not very clean water at that" ("'The Unmeaning Twaddle about Order 28': Benjamin F. Butler and Confederate Women in Occupied New Orleans, 1862," in Journal of the Civil War Era, 2:11−30).

Having reached the end of his tether, the volatile Butler issued his notorious General Order No. 28: "As the officers and soldiers of the United States have been subject to repeated insults from the women (calling themselves ladies) of New Orleans, in return for the most scrupulous non-interference and courtesy on our part, it is ordered that hereafter when any female shall, by word, gesture or movement, insult or show contempt for any officer or soldier of the United States, she shall be regarded and held liable to be treated as a woman of the town plying her avocation."

Butler's "woman order," as it became known, provoked a swift and furious reaction. Confederate General P. G. T. Beauregard directed, in his own general order, reprinting Butler's order and asking the rebel troops, "shall our mothers, our wives, our daughters and our sisters, be thus outraged by the ruffianly soldiers of the North …?" The order was also reprinted in unofficial broadsides calling on Southern men to avenge the perceived insult. The order was also denounced by the British Prime Minster and by the House of Lords.

It is, in fact, much more common to find the text of Butler's order incorporated into an anti-Union propaganda publication than in its original first printing, as here.