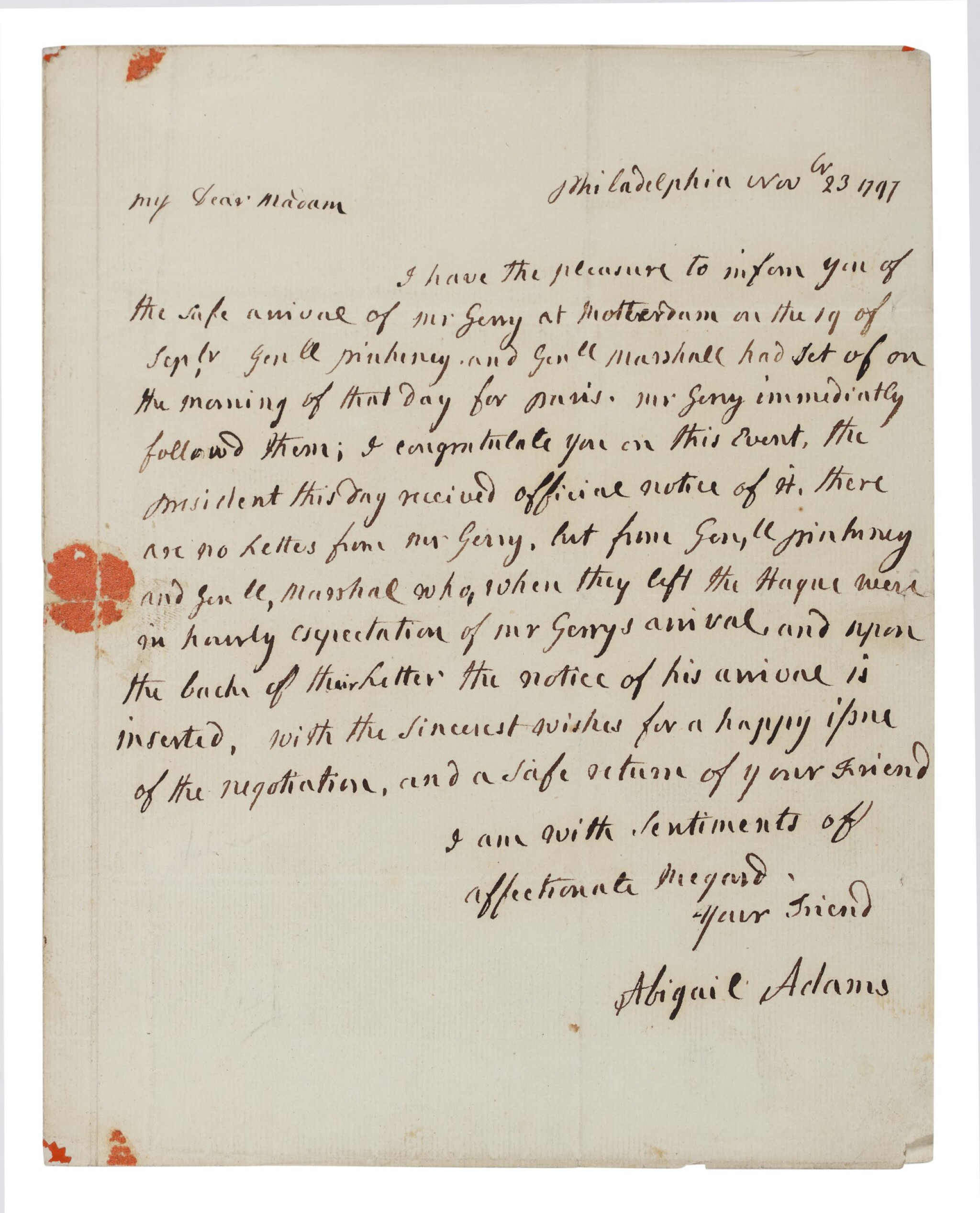 After the United States and Great Britain ratified the Jay Treaty, the former's relationship with Republican France began to deteriorate. President John Adams, who had inherited this festering crisis from the administration of George Washington, appointed Charles Cotesworth Pinckney (whose credentials as U.S. Minister France had refused), John Marshall, and Elbridge Gerry as special commissioners charged with negotiating with France an arrangement similar to that reached with Britain in the Jay Treaty.

In the present letter, Abigail Adams tells Gerry's wife that he has arrived safely in France: "I have the pleasure to inform you of the safe arrival of Mr Gerry at Rotterdam on the 19 of Septr. Genll Pinkney and Genll Marshall had set of on the morning of that day for paris. Mr Gerry immediately followed them; I congratulate you on this Event, the president this day received official notice of it. there are no Letters from Mr Gerry, but from Genll Pinkney and Genll Marshall who, when the left the Hague were in hourly expectation of Mr. Gerrys arrival and upon the back of their Letters the notice of his arrival is inserted."

The First Lady's closing wishes "for a happy issue of the negotiation and a safe return of our Friend" were only partly realized. The American commissioners were approached by three French agents (who came to be as "X", "Y", and "Z") seeking bribes on behalf of the French Foreign Minister, Talleyrand. While all three ministers rebuffed this approach, Gerry, a less staunch Federalist than the others, was willing to continue informal negotiations. Pinckney and Marshall left France in April 1798, but Gerry remained for several more months since Talleyrand threatened to declare war if he joined his fellows. Gerry returned home in October but found himself blamed for the failure of the commission by the press and by many in the Adams administration. The Quasi-War with France followed the collapse of negotiations, and two years later, Gerry, who had not been a supporter of political parties, joined the Democratic-Republicans.