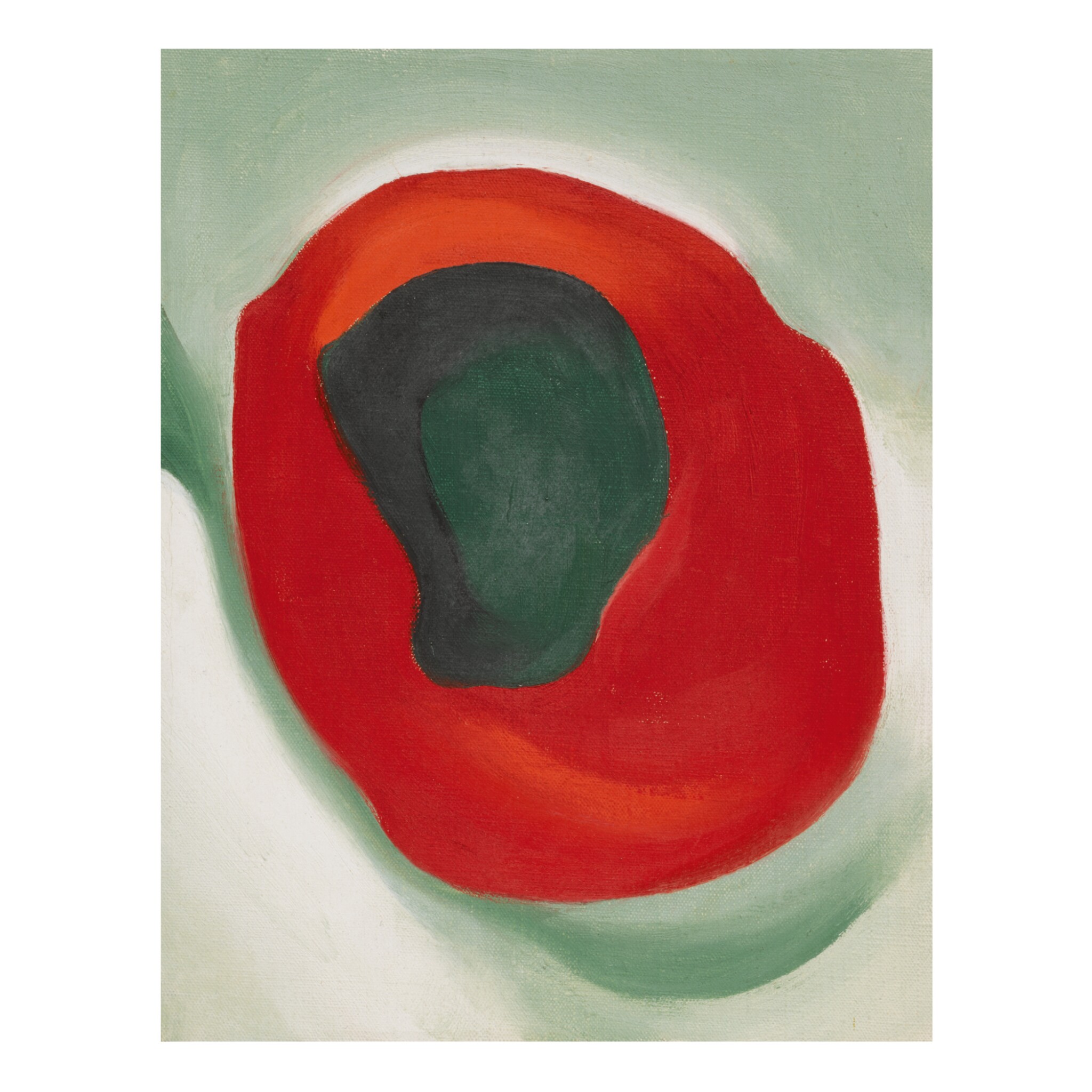 Georgia O’Keeffe’s stylistic approach to still life painting that developed during the early 1920s is exemplified in Untitled (Alligator Pear in Red Dish). The artist’s concentrated compositions from this period, which usually centered fruit placed in bowls or on plates, were rendered in simplified forms, many of which appear flattened and are delineated with juxtaposing colors. The present work, executed circa 1923, realizes this concept. The composition features a pair of dark shapes which upon further inspection can be identified as a green alligator pear, another term for an avocado, within a fiery red dish, suspended in an ambiguous white space. These still life works, particularly Untitled (Alligator Pear in Red Dish), take on a transformative quality and present their subjects in their most essential form. In 1922 O’Keeffe concluded, “Nothing is less real than realism. Details are confusing. It is only by selection, by elimination, by emphasis that we get to the real meaning of things” (as quoted in Jonathan Stuhlman, et. al., Georgia O’Keeffe: Circling Around Abstraction, West Palm Beach, Florida, 2007, p. 22).

The work of her contemporary Paul Strand greatly informed the approach O’Keeffe took to still life painting during the period. Strand was an important friend and colleague of Stieglitz and O’Keeffe’s who provided tremendous artistic influence for them both. Strand’s straight photography was simplistic in its approach to common subject matter, his picture plane typically cropped to create a skewed composition which produced entirely abstracted imagery. Stieglitz championed Strand’s photography and a series of his work executed in 1916-17 was featured exclusively in the final issues of Stieglitz’s quarterly journal, Camera Work. One such photograph, Pears and Bowls, presents a composition filled with intersecting circular forms made up of domestic objects such as bowls and drinking glasses, nestled among them are a singular pear and avocado. Strand visited to see the two in Lake George in 1919 and it was after this time that O’Keeffe began to structure her own work according to the same artistic principles that guided Strand in his photography. This was articulated in one particular instance when O’Keeffe affectionately wrote Strand to say she had “been seeing things as he might photograph them” (as quoted in Ibid., p. 23). Untitled (Alligator Pear in a Red Dish) calls to mind many of Strand’s most successful still life photographs and is further illustrative of O’Keeffe’s own innovation in the genre.