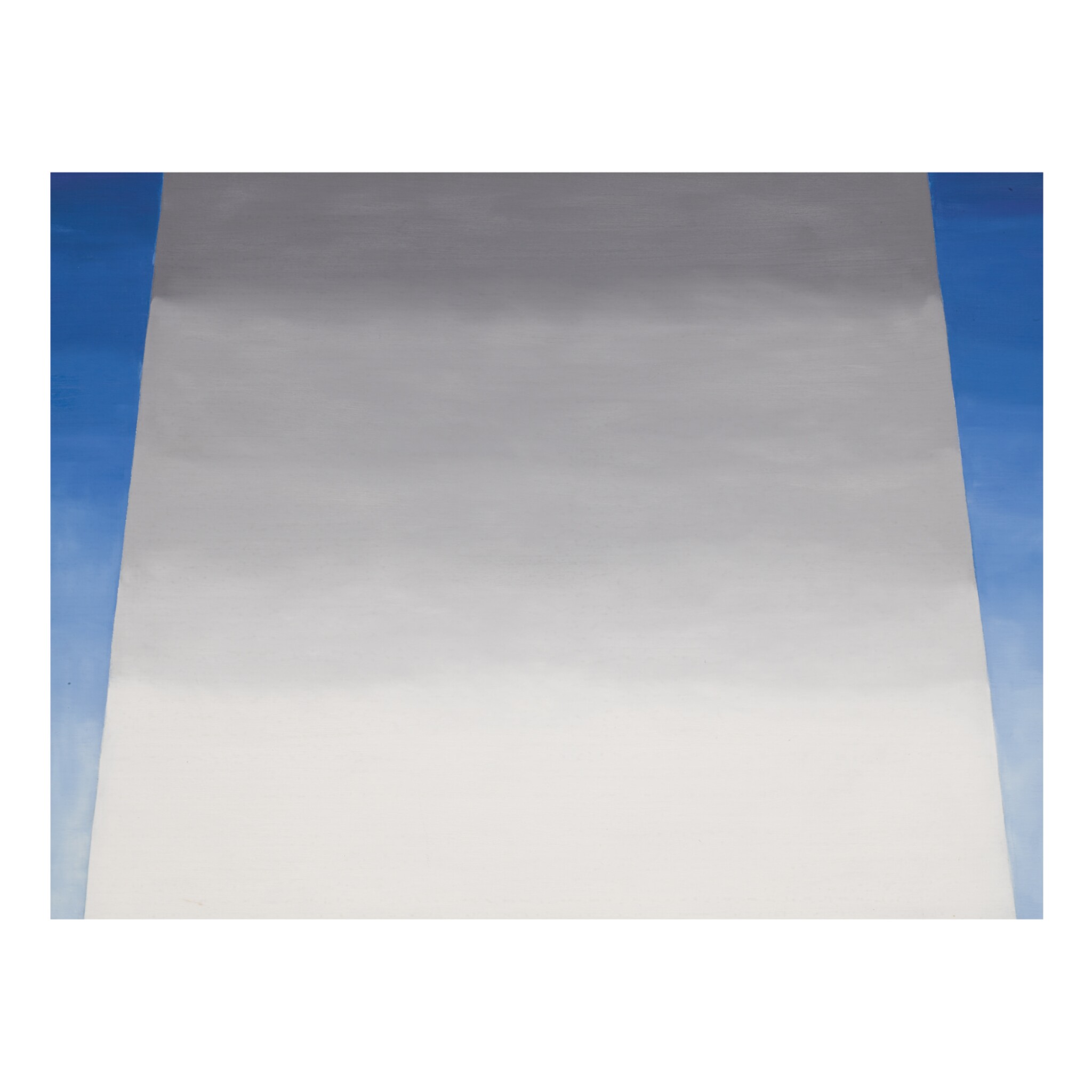 FROM A DAY WITH JUAN I

signed Georgia O'Keeffe, dated -1977- and inscribed For Juan with RattleSnakes/and Love and appreciation/Georgia-/July 27-1977 (on the backing board)

Gift to the present owner from the above, 1977

The present work inspired by a trip that Georgia O’Keeffe made with Juan Hamilton to Washington, D.C in 1976. The idea for the canvas originated as an abstraction of the Washington Monument set against the bright blue sky at either side. Hamilton recalled, “It was a beautiful day -- Columbus Day -- and a holiday. And we went to the Hirshhorn, and then we got out and walked the whole length of the Mall…And she just was fascinated: She could see the Washington Monument against the sky, and was fascinated by it, and said, 'Oh I want to paint that when I get home'...They're abstractions: not strictly about the Washington Monument, but they're about her experience with the sky. She was determined” (as quoted in Jo Ann Lewis, “The War Over O’Keeffe,” The Washington Post, March 3, 1987).

Approaching the elusive boundary between representation and abstraction, O’Keeffe fills the picture plane with the stone structure of the monument, rejecting traditional ideas of linear space and perspective. Her composition grants merely a glimpse into the larger environmental context, showing only slivers of a vivid blue sky beyond. By collapsing the space that traditionally separates an object from the viewer, O’Keeffe allows for a more directly unmediated encounter with the subject.

O’Keeffe’s contemplative minimalist canvases such as From a Day With Juan I would ultimately influence the pared-down, spiritual abstraction of the painter Agnes Martin, a key figure between Minimalism and Abstract Expressionism. Describing the influence of the present work on Martin’s career, the scholars Heike Eipeldauer and Florian Steininger note: “The light-suffused voids that characterized O’Keeffe’s last great series, ‘From a Day with Juan,’ 19767-7, more clearly invoke a metaphysical experience than her other late works. The center of the image is dominated by an imposing vertical trapezoid, which – recalling the metaphor of Jacob’s ladder – extends upwards from the ground, tapering towards the top. Martin, too, in her later years, turned to the shape of the trapezoid in Homage to Life, 2003 – though in dark, somber colors-creating a connection with an early drawing, Mountain, 1960…The atmospheric radiance of the white shape set against a blue, sky-like background, gradually dimming at it climbs, diffuses past the edges of the painting, so that the viewer is confronted with the experience of a boundless, infinite vision” (“O’Keeffe’s Late Blooms: The Abstract Landscapes,” Georgia O’Keeffe, London, 2016, p. 191).

Though she was interested in abstraction from the earliest years of her career, after 1923 O’Keeffe predominantly turned to representational subjects–an inclination most famously manifested through her monumental images of plants and flowers. By the mid-1950s, however, she once again began to focus on abstract imagery, increasingly removing extraneous detail, and ultimately capturing only the most essential shapes and forms of the scene before her. Her growing preoccupation with pure abstraction finds similarities with artists such as Ellsworth Kelly, who was concurrently exploring the abstract qualities inherent to representational imagery.

In works like From a Day with Juan I, O’Keeffe transforms her empirical experience of the physical world, in this case the Washington Monument, into a transcendental search for the ‘feeling of infinity.’ The dissolving boundaries of the obelisk extend beyond the canvas, inviting the viewer to imagine their seemingly limitless climb skyward. Of her interest in the idea of infinity, O’Keeffe wrote: “When I stand alone with the earth and sky a feeling of something in me going off in every direction into the unknown of infinity means more to me than anything…” (as quoted in Marjorie P. Balge-Crozier, Georgia O’Keeffe and the Sublime, Ann Arbor, Michigan, 2004, p. 110).