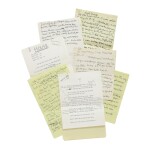 A FINE COLLECTION OF MANUSCRIPTS AND TRANSCRIPTS RELATING TO GHOST RANCH, THE HOUSE IN ABIQUIU AND OTHER RESIDENCES.

Georgia O'Keeffe's reminiscences of the remarkable homes and studios she created for herself. In these vivid writings, O'Keeffe relates her houses to her artistic vision. In "House," she writes, "Everyone seems to want a house — a home — or a place of their very own …. I wanted a place of my own particularly because I wanted to keep the many things that had to do with my work together. Most of my possessions were of very little or no value to anyone but myself but to me they were important — canvases, brushes, canvas to prepare more canvases — and all sorts of tools that I needed — different kinds of saws, planes, knives, different kinds of screw drivers.

"When I went to the city in the fall I put my best saw in my bed so no one else would use it."

Writing of her early days at the Ghost Ranch, she says, "When I first saw the Ghost Ranch, the road went along the high hills above the spectacular part of it. A wide red valley with a long row of high red and yellow cliffs with red hills below them reaching far — this was my world immediately — big and wide — with no one living in it.

"In time, it became a dude ranch — and I came in the summers to paint. Later, it was bought by Arthur Pack, and I began living in the first house he had built. For me it was good because I like a quiet place by myself to work. When the Presbyterians moved in, the best thing they did for me was not to tell anyone where I lived.

"I started painting the purple hills immediately — the country looked like something already painted with its dry colorful cliffs — hills — and sparse trees."