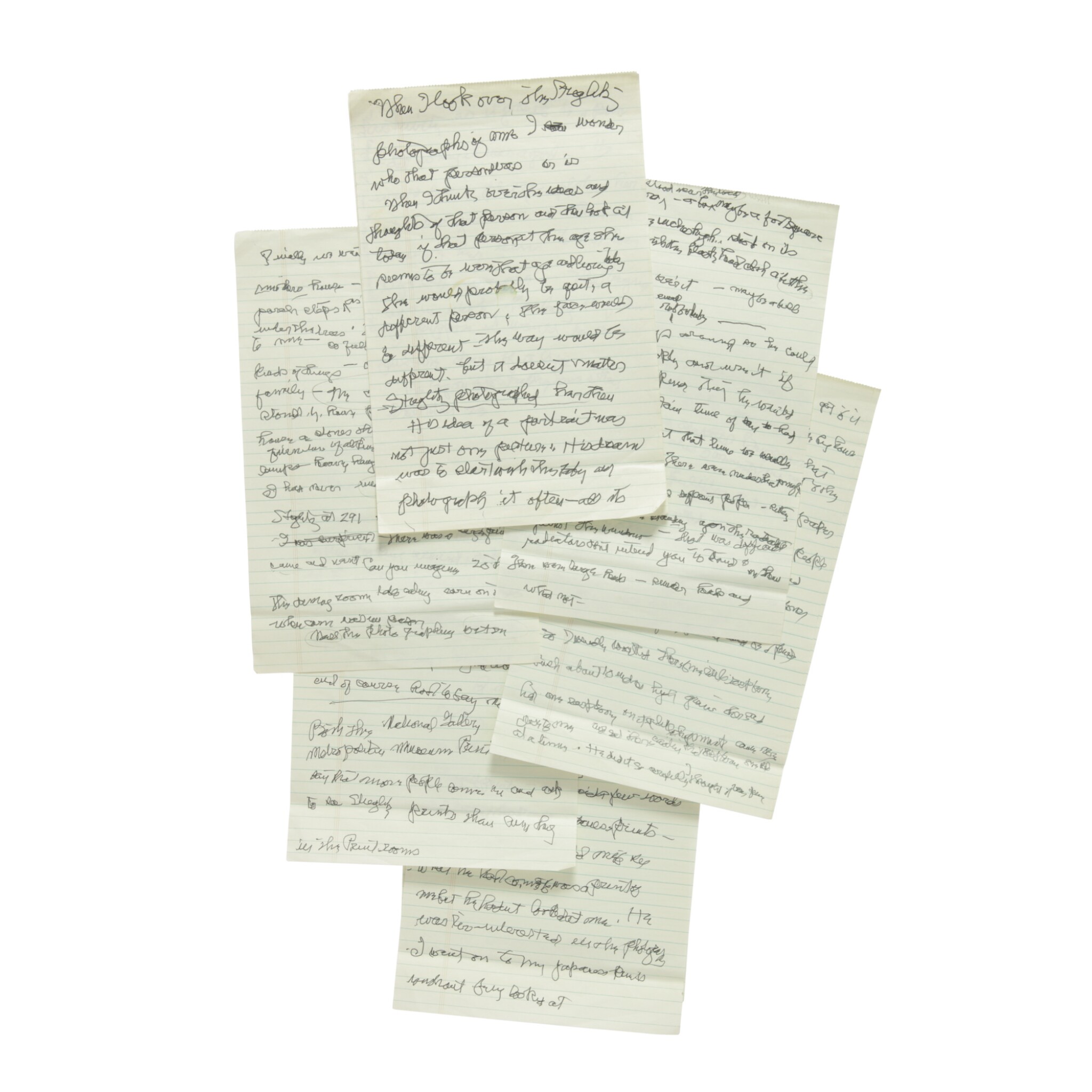 AUTOGRAPH MANUSCRIPT OF O'KEEFFE'S INTRODUCTION FOR GEORGIA O'KEEFFE: A PORTRAIT BY ALFRED STIEGLITZ

Approximately 65 pages mostly on ruled yellow foolscap (13 1/8 x 8 5/8 in.), [Abiquiu, New Mexico (?), mid-1970s], titled in another hand on a manila envelope "About Stieglitz — In Portrait Book"; condition varies. With various transcriptions interleaved with various sections of text, including a galley headed "Introduction."

"… a rather well–groomed serious–looking person": Georgia O'Keeffe on Alfred Stieglitz and his celebrated photographic portraits of her.

O'Keeffe contributed an 11-page introduction to the catalogue. This important text discusses Steiglitz's photographic practice and O'Keeffe's experiences posing for him. This introduction was fashioned from the present group of notes and vignettes. With diminished eyesight, O'Keeffe put her thoughts down in her scrawling late hand on yellow foolscap. The notes were then transcribed and edited by O'Keeffe and her editor. A copy of the galley proofs from Meridan Gravure is included in this collection.

This manuscript is rich in pertinent detail and anecdote. Of the first photographs Stieglitz took of her, she writes, "Stieglitz photographed me first at his gallery '291' in the spring of 1917. I had gone all the way from Texas by train just to be there for three days and see the second show of my drawings and watercolors. I was teaching at the West Texas State Normal School. A few weeks after I returned to Texas, photographs of me came — two portraits of my face against one of my large watercolors and three photographs of hands. In my excitement at such pictures of myself I took them to school and held them up for my class to see. They were surprised too. Nothing like that had come in to our world before."

"Stieglitz had a very sharp eye for what he wanted to say with the camera. When I look over the photographs Stieglitz took of me — I wonder who that person is. It is as if in my one life I have lived many lives. If the person in the photographs were living in the world today, she would be quite a different person — but it doesn't matter — Stieglitz photographed her then."