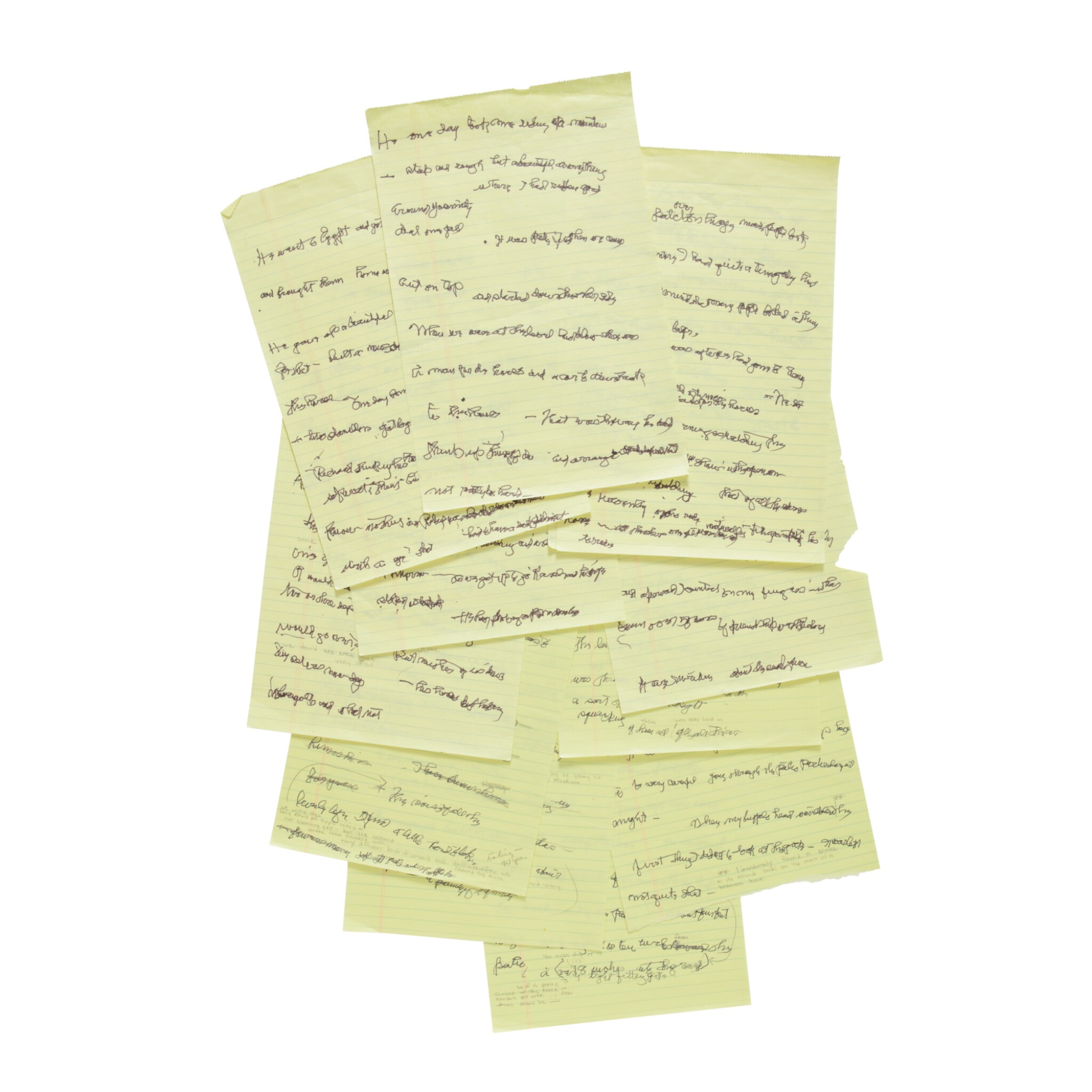 AUTOGRAPH MANUSCRIPT IN MULTIPLE PARTS, TITLED IN ANOTHER HAND "RICHARD"

Approximately 28 pages on ruled yellow foolscap (13 1/8 x 8 5/8 in.), [Abiquiu, New Mexico (?), mid-1970s], with numerous annotations in pencil in another hand, titled in another hand "Richard" on accompanying manila file folder and envelope; some leaves torn or cut into two (but done for original use). Mimeographed typed transcriptions with slight variations from the original.

Georgia O'Keeffe's recollections of her friend and neighbour, Richard Pritzlaff. "When I was in Hawaii I went to Cona [sic]...Wandering about I met a tall young man in a bathing suit sitting on the lawn under a striped colored sun shade — drinking. I don't know what he was drinking — it doesn't matter. Yes he was from New Mexico. He had been up where I lived at the Ghost Ranch and thought nothing of it."

O'Keeffe had moved to Kona Inn, on Maui, in February of 1939, after being offered an all-expenses paid trip by the Dole Company in exchange for two new paintings that they could use for promotional purposes. It was there that O'Keeffe first met Richard Pritzlaff—a rather eccentric individual who raised Arabian horses, as well as Chow dogs, just north west of Abiquiu. While O'Keeffe's relationship with the Dole Company soured quite quickly, hers with Pritzlaff blossomed. Nearly thirty years after meeting in Hawaii, the pair travelled together to Vienna, following decades of regularly keeping another's company. They not infrequently attended bullfights together, rode Arabian horses through the hills of New Mexico, and drank coffee that it took Pritzlaff an hour and a half to make atop his wood stove. Indeed, theirs was a friendship that ultimately endured for nearly fifty years.

The manuscript is divided into five sections, titled on the accompanying manila file folder in another hand: "1. Hawaii"; "2. Stove and Sick Horse"; "3. Dead Horse and Bull Fights"; "4. Bed on Roof"; and "5. Vienna." Given the various mimeographed typescript transcriptions present, it is possible that these sketches of Pritzlaff may have been intended for the follow-up to O'Keeffe's 1976 Viking Press volume, for which she was making notes.