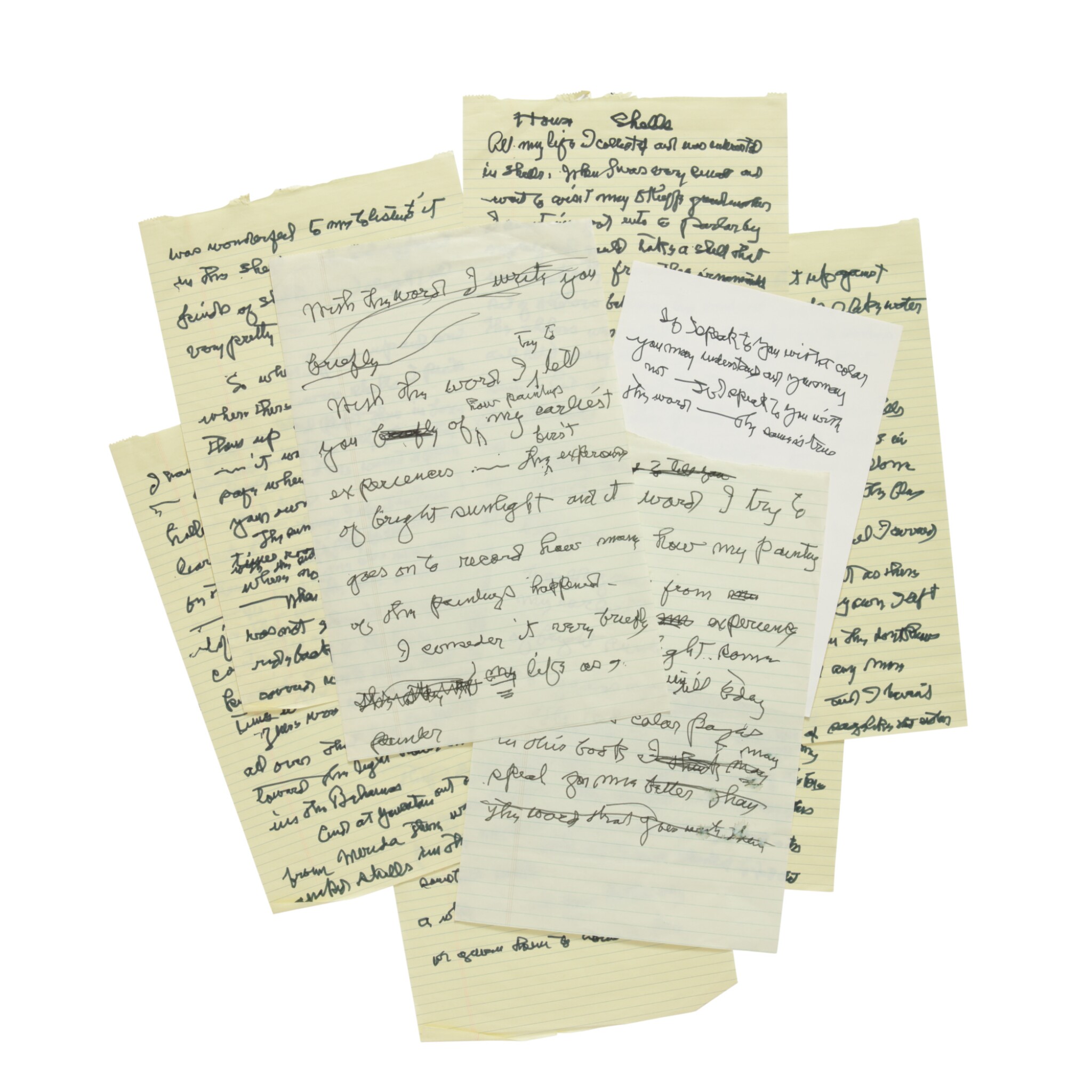 AN ARCHIVE OF PUBLISHED AND UNPUBLISHED MATERIAL, CIRCA 1930S–1970S

An important archive of writings by Georgia O'Keeffe on a variety of subjects.

Most of the papers collected here were written by O'Keeffe for both published and unpublished projects with the Viking Press. Although a great many of these writings were done in the artist's last years, a surprising number were written much earlier, before O'Keeffe's distinctive handwriting began to decline.

The range of subjects here is wide, with many pieces discussing individual paintings, especially flower paintings. Also included are observations on Taos, Lake George and other places, thoughts on making pottery, the Art Students League, the influences of other artists. There is also a 6-page undated letter to Juan Hamilton.

Perhaps the greatest surprise in the archive is approximately 50 pages of writings and reminiscences about O'Keeffe's dogs. Although most of this file is composed of late writings in a scrawling hand on foolscap, there at at least 5 tightly-packed pages written much earlier. O'Keeffe had owned cats since the 1930's, starting with her beloved Long Tail. In 1953 she acquired two blue chow puppies, Bo and Chia, from a neighbor. Chows became her favorite breed and Bo [sometimes Bobo or Beau] was her favorite of all the dogs she was to own. Bo died after being run over by a car several years later and O'Keeffe buried him in the hills near her home. Sometime not too long after Bo's death, she wrote him an astonishing letter on a sheet of ruled notebook paper: "Bo, I must write you this morning as I can not speak to you. When I look out on the yellow cliffs and red hills, I often wonder if if you are running and climbing about out there and will you come to me in a few moments full of this fine air and your [sic.] fine and laughing because you have such a good time as you have so often — If I call, might you come tearing at me from far away like a hairy bullet? Maybe not. It is a long way from home to the white hills where I lay you deep in the white sand under a cedar tree.

"But this morning, Bo, I am very upset. Your yellow-eyed friend Chia is very jealous of the little Inca. Every day she gets worse. I keep her up here with the [word illegible] for fear she will kill the little Inca. Richard [Pritzlaff] has written me to take her to him. He will take her and be good to her. She can sleep in his room instead of mine. I brushed and combed her for the last time. Considering that she isn't naturally a handsome dog like you were, she is looking very pretty. As she is all the dog I have left, I have worked on her — fed her carefully and brushed and combed her almost every day …. She has become more and more attached to me. If I even sneeze, she comes to see about it … That little Inca gives promise of becoming another spectacular dog like you. This is the only thing I have that is a part of you, your sister and your friend. I asked Richard to get me another male dog and this little blue Inca puff ball is what he brought. I never thought that Chia would have such a hate for the new dog or I wouldn't have planned to have him."

A revealing and informative archive of Georgia O'Keeffe's writings.