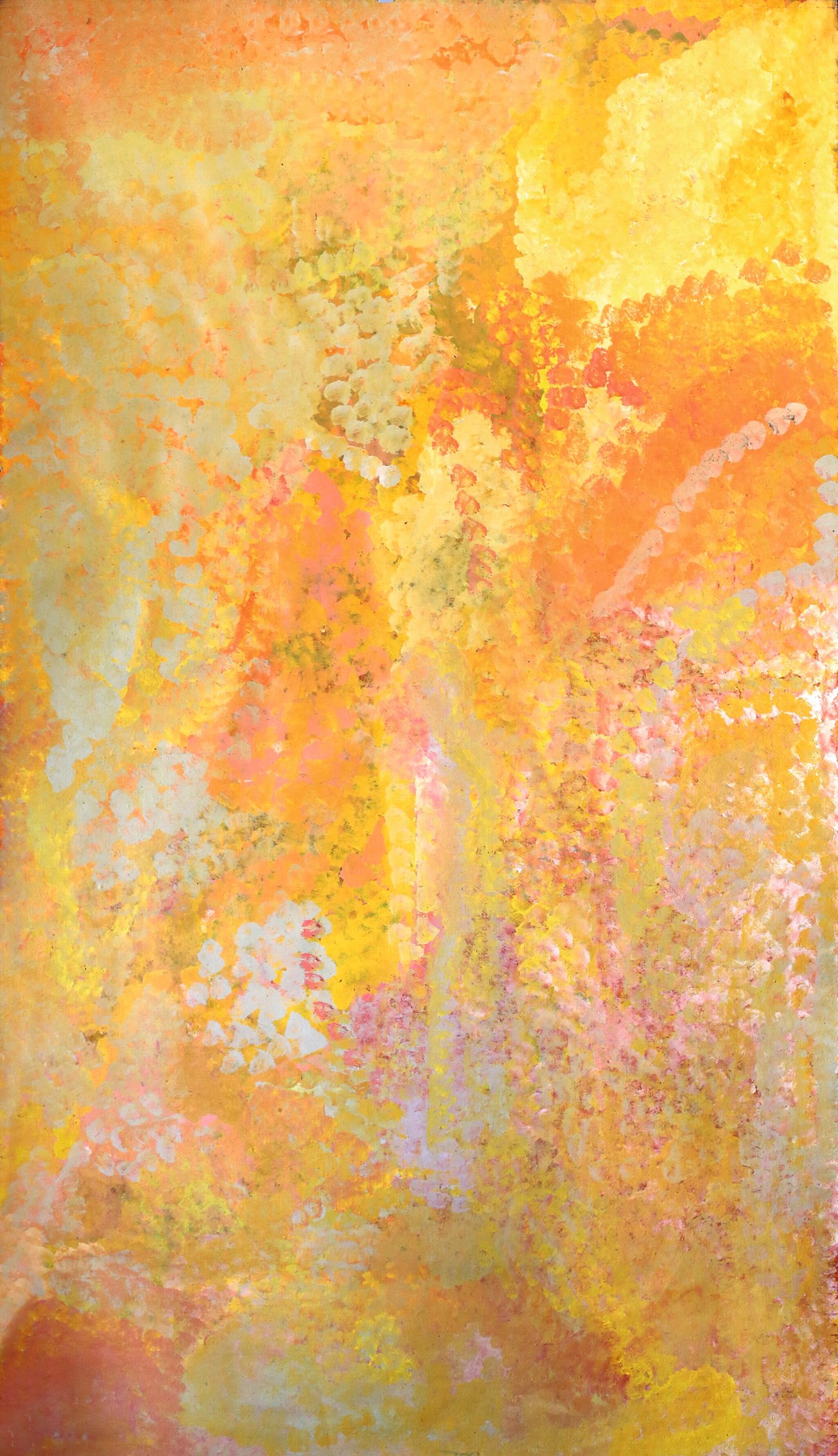 Painted at Delmore Downs Station, Northern Territory for the Delmore Gallery in December 1992
Private collection, Sydney, acquired from the above

Towards the end of 1992, Kngwarreye eschewed her mainstay early technique of creating paintings with layers of applied dotting and her style broke free. Summer Flowers II is one of the larger, successful and most aesthetically beautiful of these break-away paintings.

Janet Holt of Delmore Gallery, who commissioned this painting, comments in the accompanying documentation that “Summer Flowers II was painted in December of 1992, a summer in which dry wildflowers and grasses were abundant across Alalgura (Alhalkere). Colors of the red soil and organic matter intermingle with subtle blues which hint to the water underlying the land, even in the driest of times. This work is a wonderful and early example of the increasing abstraction Kngwarreye's works developed throughout this period. Here, she begins to use a broader brush and a wash of color, in comparison to the finer dots utilised earlier in the same year.”

Large scale paintings from this period and style are rare, with the National Gallery of Australia holding no work from the year 1992 in its collection of 22 paintings by the artist and the National Gallery of Victoria holding just one small painting from this year amongst its 21 examples. Two large, related examples are illustrated in the first monograph on Kngwarreye and another was recently acquired from the collection of Thomas Vroom by the Foundation Opale in Switzerland.

Judith Ryan, Senior Curator of Indigenous Art at the National Gallery of Victoria, has called Kngwarreye “both an enigma and an extraordinary phenomenon. She was the first Aboriginal artist to take hold of the Australian contemporary art scene, thereby exploding the myth that Aboriginal Art is largely the preserve of men. Such was her status that her art transcended categories of gender and race” (Margot Neale et al., p.39). Her first retrospective was mounted by the Queensland Art Gallery in 1998, with another to follow in 2007 and 2008, curated by the National Museums of Art, Osaka and The National Art Centre, Tokyo, in conjunction with the National Museum of Australia. Her star has continued to shine posthumously, with a group of her paintings acquired last year by the Tate Modern, another retrospective in the planning and Kngwarreye’s inclusion in Artsy’s most recent annual list of the Most Influential Artists of 2019.

This painting is sold with documentation provided by the Delmore Gallery, signed by Janet Holt