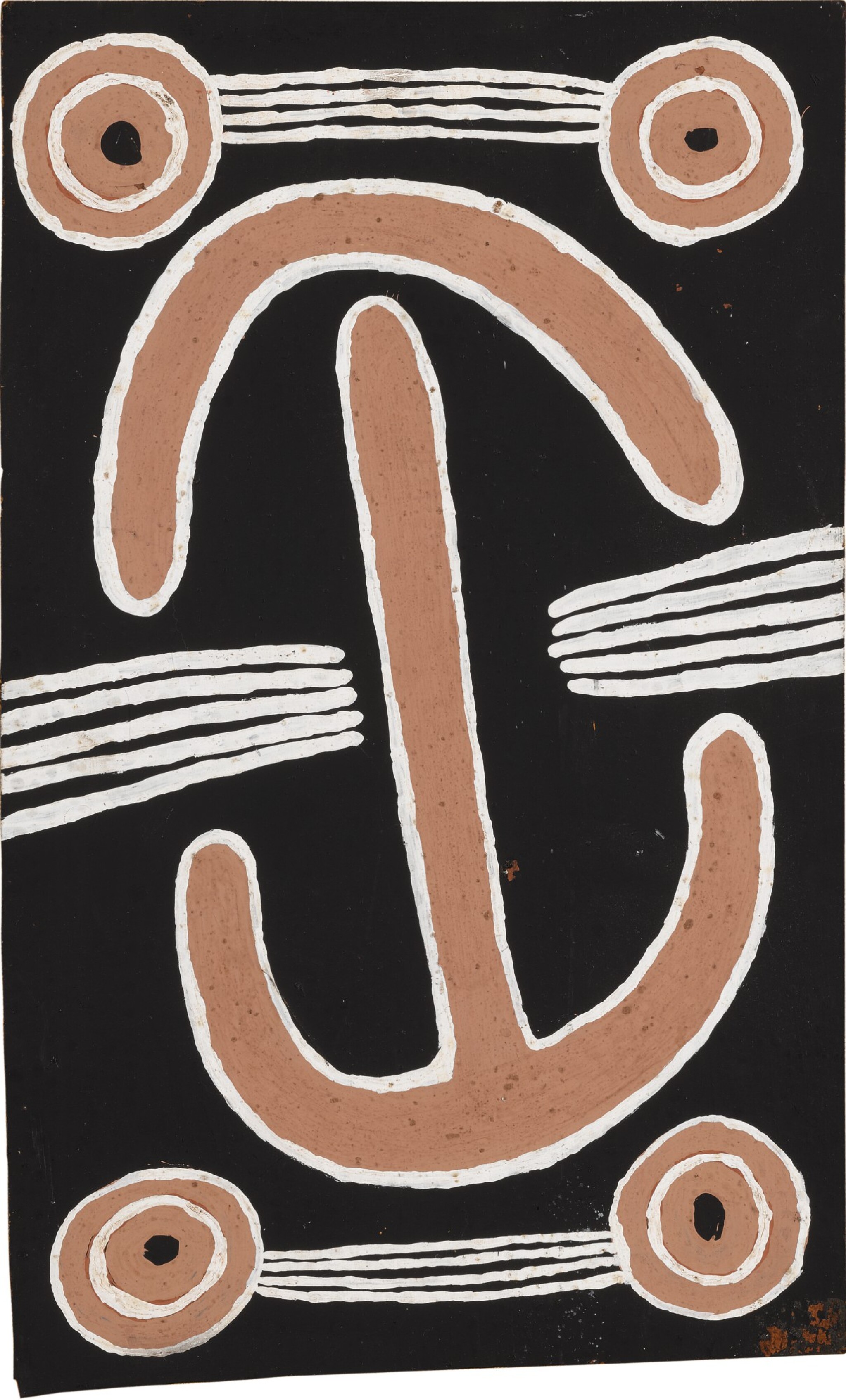 Synthetic polymer paint on composition board

Consignment No 8, painting 36 to the Stuart Art Centre, Alice Springs
Private Collection USA, acquired from the above by workers at Pine Gap (1969-1973)
Thence by descent
Geoff Bardon and James Bardon, Papunya: A Place Made After the Story: the beginnings of the Western Desert Painting Movement, The Miegunyah Press, Melbourne 2004, p.300

Charlie Tarawa (Watuma) was a go-between, who bridged the gap between Indigenous and non-Indigenous worlds. Having grown up in the bush around the Northern Territory/Western Australian border near the current location of the Kintore community, as a boy of about 7 years of age, Watuma and his family travelled east. Their arrival at Mt Liebig in 1932, coincided with the presence of the University of South Australian Anthropological Expedition.[1] Within a few years, Watuma would undergo initiation near Hermannsburg Mission and soon after commence work as a builder. In the early 1940s he was transported to Adelaide River military camp, south of Darwin, where he worked as a labourer during WWII, telling me many years later that he witnessed the bombs falling during his stint in the Top End. After returning to Central Australia, Watuma acquired a small train of camels and operated as a ‘dogger’, collecting dingo ‘scalps’ for a bounty of £1 per dog. While dogging in his homeland, Watuma frequently camped with Pintupi relatives who maintained their customary life, without European contact. Telling them of the advantages of a more settled life, Watuma encouraged his countrymen and women to return with him to Haasts Bluff ration station where they would find permanent water, flour, tea and sugar. Uta Uta Tjangala, Ronnie Tjampitjinpa and Willy Tjungurrayi, who later would become artists, were among those who followed Watuma’s lead.[2]

Watuma continued to be a pivotal intercultural broker at Papunya, where from 1971, he enabled less experienced Pintupi relatives to participate in the bourgeoning painting movement.[3] Watuma’s ready sense of humour and willingness to communicate with European interlocutors is evident in his approach to painting, the current work being a case in point. Despite its explicitly sexual subject, Geoffrey Bardon, the schoolteacher who encouraged the production of paintings at Papunya, titled this work, Moon Love Dreaming of Man & Woman - Medicine Story. While Bardon’s interpretation is wistfully celestial, I am confident that Watuma had a much more carnal form of ‘love’ in mind.

Moon Love Dreaming of Man & Woman is dominated by two bold icons. The ‘U’ shape signifies a figure in Western Desert iconography. The sign is derived from the mark made in the earth by a seated figure. This sign is sometimes gendered, as is the case here. With the addition of a single line from the centre of one of the ‘U’ shapes, Watuma indicates a man’s erect penis. The proximity to, and position of the female ‘U’ shape, shows they are a man and a woman having sex.

The frank quality of Pintupi ontology can prove confronting, and any cross-cultural embarrassment experienced by non-Aboriginal people provides a source of great amusement for some Pintupi artists. Watuma and his countryman Uta Uta for instance, enjoyed regaling visitors with the story of an old man, Yina, and his illicit encounter with his mother-in- law at Umari. The bold iconography of Moon Love Dreaming of Man & Woman is, I contend, both a well-considered assertion of cultural difference, and an expression of shared humanity.[4]

The distillation of narrative elements into clear-cut forms is typical of Watuma’s early paintings, as he discovered his metier while displaying an idiosyncratic economy of style. The visceral materiality of this boldly drawn coupling, each ‘personage’ with its distinctive physiognomy, is typical of Charlie Tarawa’s art. He imbues the copulating pair in Moon Love Dreaming of Man & Woman with autonomous life, and in doing so exhibits bravado equivalent to the most brazen artworks by the European surrealists Joan Miro and Jean Arp.

4 For a comparable examination of levels of meaning in Charlie Tarawa’s painting, see Johnson, 2009, pp. 68-69.