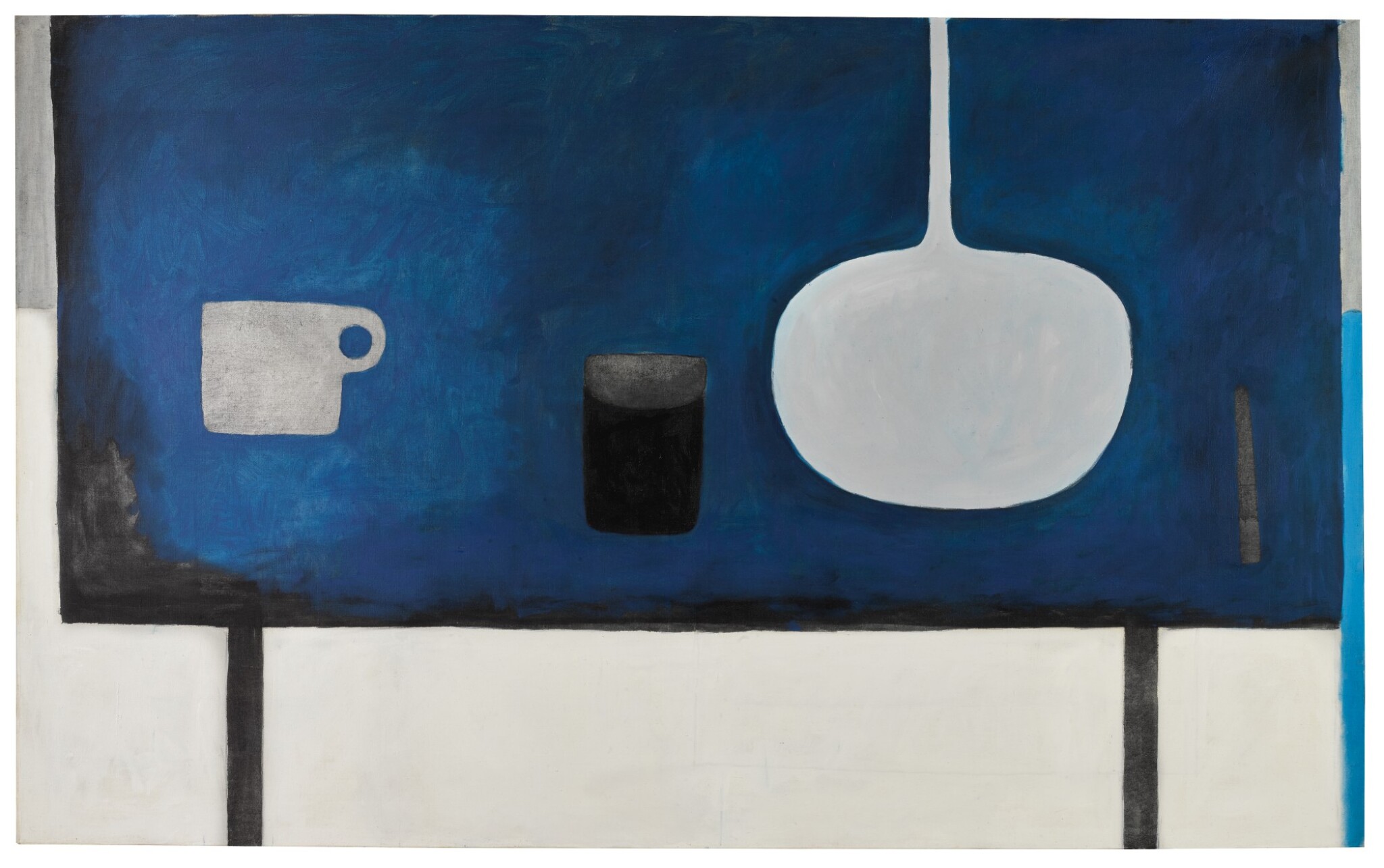 signed W Scott, dated 71 and inscribed on the reverse

Inspection under ultraviolet light reveals fluorescence in line with the Artist's working methods and materials.

The work is held in a simple wooden and metal frame.

In 1972, the Tate in London held a major retrospective of William Scott’s paintings and gouaches, curated by Alan Bowness. Concluding the exhibition was a group of recent paintings: the present work, Deep Blues, was one of this selection. These recent works were populated with the familiar motifs of simple domestic tableware – both familiar in Scott’s oeuvre and familiar to the viewer.

Saucepans, knives, bowls and cups that peppered Scott’s work from the 1950s continued to preoccupy his output in the early 1970s. As the violin was to Picasso and Braque, so the saucepan was to Scott (Chris Stephens, William Scott Centenary Exhibition 2013, exh. cat., Tate St Ives, 26 January - 6 May 2013, pp.7-8). The saucepan was the fundamental vessel through which Scott experimented formally and found expression. In 1947, Scott stated, 'I find beauty in plainness, in a conception which is precise…a simple idea which to the observer in its intensity must inevitably shock and leave a concrete image in the mind'. With an unwavering obsession, Scott returned again and again to these humble objects, often associated with his austere Presbyterian upbringing.

The 1960s and 1970s saw Scott pare back his paintings, distilling subject and form into highly restrained compositions, often removing the sense of three dimensions and stripping away the luxuriousness evident in his 1950s work. Scott was photographed in front of Deep Blues by Jorge Lewinski (see fig.1), and the photograph accompanied John Russell’s review of the exhibition in The Sunday Times. Russell wrote of the recent work, and one imagines he could be talking specifically of Deep Blues: ‘In some of Scott’s finest pictures he seems to move in and out of all these subjects in one and the same painting; at it is clear from the work of 1971 that the round handle of a cup and the long, slender, wand-like handle of a pan can still become, in his hands, the instruments of magic.’ (John Russell quoted in Norbert Lynton, William Scott, Thames & Hudson, London, 2007, p.324).

The first major British artist to meet artists from the New York School, Scott’s earliest encounter with the Abstract Expressionists was in 1953 in New York. Introduced by the art dealer Martha Jackson, Scott met Rothko, de Kooning, Kline, Pollock and James Brook during the trip. His first impression of the group’s abstraction was: ‘bewilderment, it was not the originality of the work, but it was the scale, audacity and self-confidence – something had happened to painting’ (ibid, p.109). Upon his return to England, and the resumption of his teaching post at the Corsham Academy of Art in Bath, a fertile centre of cutting-edge creativity in the UK, Scott became a medium between America and British artists, channeling the ambition, bravura, and avant-garde from across the Atlantic into his own work. In his work, Scott sought to unify a number of dialectical opposites, between abstraction and figuration, the domestic and large-scale, Europe and America, modernity and art historical traditions – Alan Bowness termed this negotiation as that between ‘austerity and sensuality’.

Whilst many of the works from the early 1970s were minimalist in feel, Deep Blues retains the sensuality of Scott’s earlier works. Scott uses white, black and blues, as opposed to singular colour evident in other contemporaneous works, and there is variation to these colours. Tones and opacity modulate within each hue. Whites are modified with deliberate greying to the left-hand cup and barely-concealed black tones laid under the bottom-most white strip. Scott handles the paint with energy, particularly in the dark blue – brush strokes are applied without uniformity and with vigour. To the right edge, a vertical strip of light blue punctuates the composition, making an unexpected edge. Quite unusually, the entire table-top and table legs are visible, perspective made beholden to Scott’s eye. In Deep Blues, Scott delights in the materiality of the paint, in the expression and emotion made manifest through painterliness and the possibilities of experimental composition and colour.