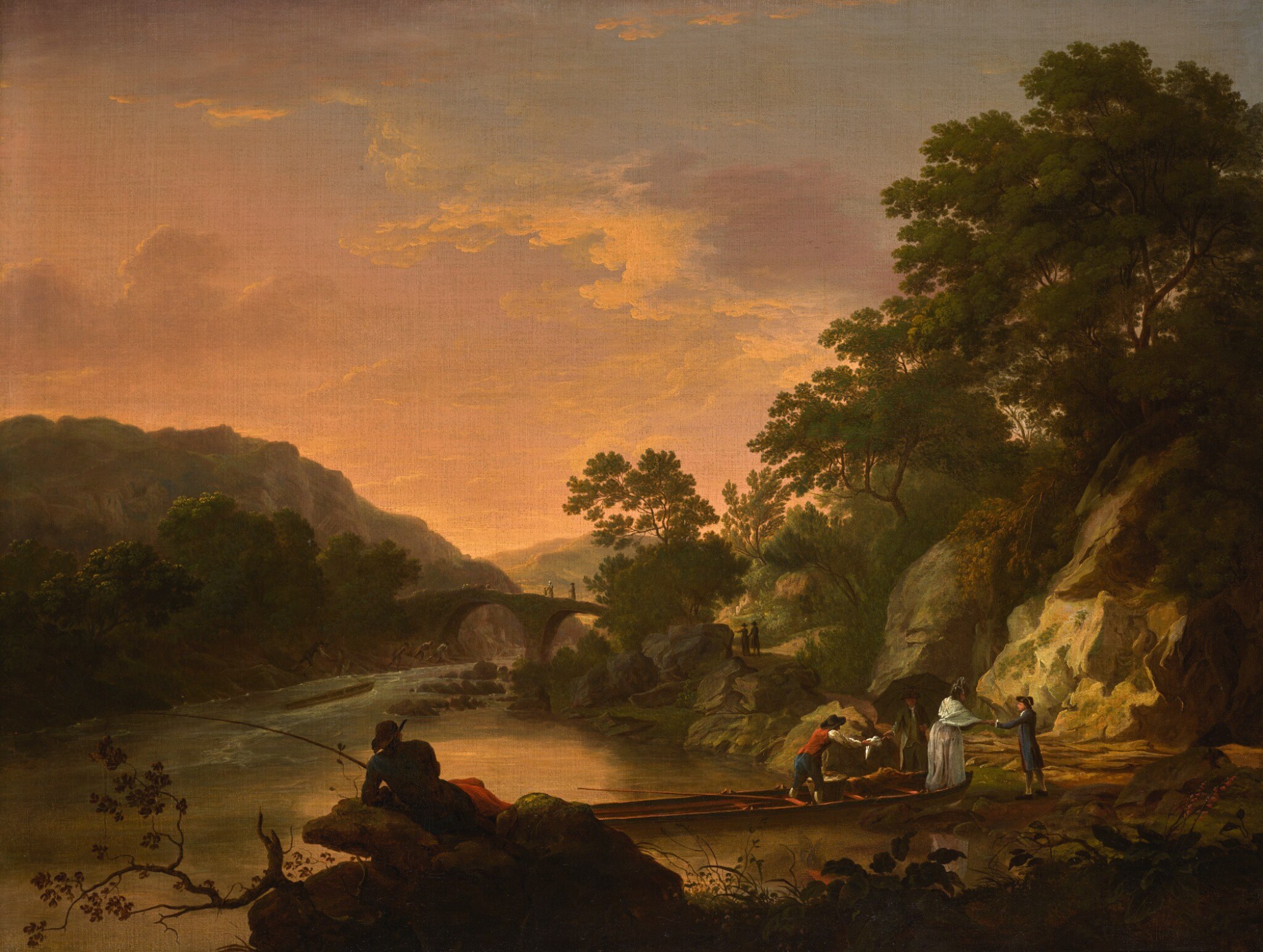 VIEW OF KILLARNEY, WITH THE PASSAGE TO THE UPPER LAKE

The canvas has been recently relined. The paint surface is clean with a clear varnish. There is no need for further restoration or conservation. The surface of the paint is stable with no extant damages or loss of paint though there are some areas of thinness, predominantly in the darks. Examination under ultraviolet light reveals scattered retouching and infilling to craquelure throughout, notably in the rock on the right-hand side and in the sky lower centre. There is some strengthening in the sky centre left and also to the figure of the fisherman in the foreground. The picture is ready to hang in its current state.

This important painting, previously unknown to scholars until it was exhibited by Desmond FitzGerald, Knight of Glin in the Age of Elegance exhibition at Lyons Demense in 2007, is the first and prime example of two version of the composition by Ashford. An early work, as FitzGerald commented, ‘this is Ashford at his finest, at the moment in the 1770s when he and Thomas Roberts, as young artists, were competing in a spirit of friendly rivalry to redefine the landscape school by the direct observation of Ireland’s scenery’. Painted on a larger scale than the second version of the composition, indeed an unusually large scale for the artist, and more completely worked up, this painting is now considered one of Ashford’s greatest early masterpieces.

The lakes of Killarney, at the foot of the Mangerton Mountains in County Kerry, are some of Ireland’s most spectacular natural beauties. Consisting of three lakes – Lough Leane, Muckross Lake (also called the Middle Lake) and the Upper Lake – surrounded by the rugged slopes of MacGillycuddy’s Reeks, in the mind of eighteenth-century artists and travellers they represented the ultimate destination for those seeking wild, untamed Irish landscape and a paragon of Burke’s definition of The Sublime. In the mid-1770s the Irish noblewoman Lady Louisa Conolly of Castletown, daughter of the Duke of Richmond, described visiting the lakes. ‘Beyond these beautiful high hills’, she wrote, ‘you see monstrous rock mountains, you then turn round an island into Muckross lake, where you coast along a rocky shore, that the water has made so beautiful that every rock pleases you… You then go thro’ a narrow channel into the Upper Lake, where you have the sublime in perfection’.1 It is this very spot, the narrow passage between the middle and upper lakes with its rock-strewn banks, that Ashford depicts here, complete with fashionably dressed travellers stepping from a boat to admire the landscape. This is a motif which Ashford takes particular pleasure in recording, and similar figures can be found admiring the picturesque views of the Dargle Valley in a landscape belonging to the Royal Hibernian Academy, or the antique remains of Cloghoughter Castle in a painting now in the Richard Wood Collection at the University of Limerick. In the foreground a fisherman reclines upon a prominent rick, his rod dangling limply in the stream, in a motif which FitzGerald identified as recalling the work of John Butts.

William Ashford was one of the key figures in the development of landscape painting in eighteenth-century Ireland, a genre that he did much to establish as one of the highpoints of Irish art in the second half of the century. Though he was born in Birmingham, Ashford spent his entire career working in Ireland. Originally moving to Dublin in 1764, at the age of eighteen, to take up a job in the Ordnance Office, within three years of his arrival he was exhibiting at the Society of Artists on William Street. At first he exhibited as an amateur, showing flower pieces and still lives, but from 1772 onwards he turned his attention to landscape painting and would dedicate the rest of his life to the genre. Ashford met with early critical success, winning premiums from the Dublin Society and gaining notice in London when he began showing works at the Royal Academy from 1775 onwards. His distinguished career saw him elected President of the Irish Society of Arts in 1813 and culminated with his appointment as the first President of the Royal Hibernian Academy in 1823.

As with his direct contemporary Thomas Roberts, it is Ashford’s direct response to the landscape of Ireland in paintings such as this that gives his work such vitality. Unlike artists of the previous generation, like George Barret, whose landscapes are often works of the artist’s creative imagination in the classical tradition of the capriccio, Ashford’s greatest paintings are all views of real places or directly inspired by Irish scenery. After Roberts premature death in 1778 Ashford completed the latter’s important series of views of Carton, which still hang in the house today, and was himself commissioned by the Fitzgerald family for a major landscape which is now in the National Gallery of Ireland. Killarney, however, was a particularly favoured subject, and Ashford painted several other views of the area, including Killarney from Aghadoe, Innisfallen Island, and Muckross Abbey, all of which he exhibited in Dublin in 1780. With its pleasingly balanced composition and carefully modulated palate, which beautifully captures the soft light of the West of Ireland, this recently rediscovered masterpiece is one of his greatest achievements.

The second version of this painting, which is signed and dated 1778 but lacks the figure of the reclining angler in the foreground, was formerly in the collection at Tryon Palace, North Carolina (sold New York, Sotheby's, 26 January 2006, lot 48 for $329,600).2