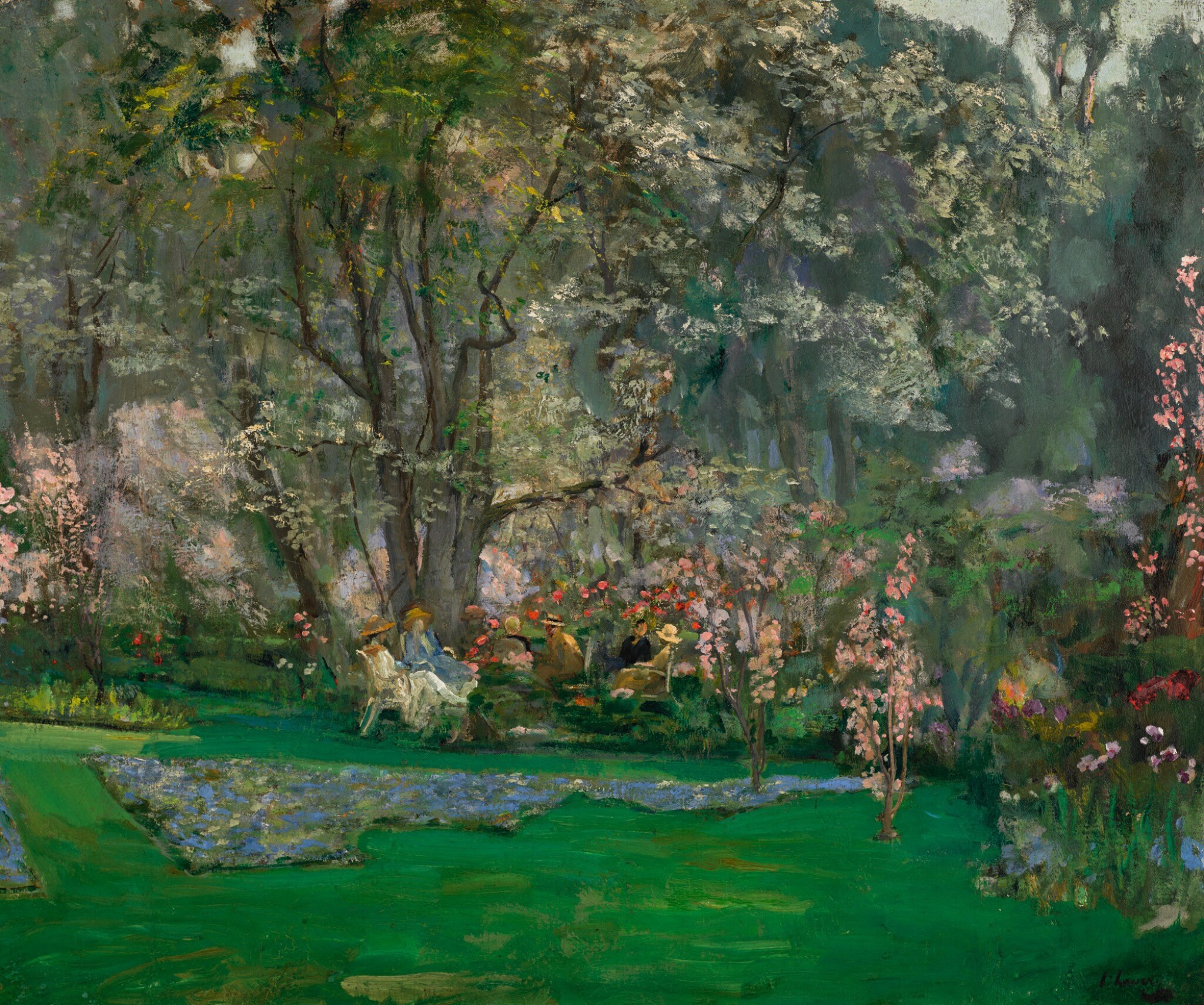 SPRING IN A RIVIERA GARDEN

Original canvas. Some occasional traces of craquelure within the trees and foliage which appear stable and only visible upon close inspection. Overall the work appears in good condition.

London, Alpine Club Gallery, Pictures of Morocco, the Riviera and other scenes by Sir John Lavery RA, with Portrait and Child Studies by Lady Lavery, 1921, no. 45 (probably as The Garden, Villa Sylvia);

Having remained in London over Christmas and new year while builders added an extension to 5 Cromwell Place, the Laverys took the earliest opportunity in January 1921, to travel to the south of France. There, they are likely to have rendezvous-ed with the artist’s pupil, Winston Spencer Churchill, who was in Nice for a brief holiday with his wife, before Parliament resumed at the end of the month. Staying at the luxurious Eden-Grand Hotel, at Cap d’Ail, the Laverys’ sojourn continued for a further two months. It was however, a busman’s holiday.

The weather, as the artist reported to his daughter, Eileen, was ‘simply divine’ and ‘the place, dreamland’, outshining ‘the basking days of Tangier’. He was nevertheless ‘getting on with some canvases of sunshine’ and hoped to be back in London by 10 April according to letters dated 6 and 21 March 1921 (private collection). The previous three months had resulted in an extensive body of work including views of the hotel terrace, the glistening landscapes of Beaulieu and the secluded bay of La Mala, along with garden scenes at the Villa Sylvia on Cap Ferrat. Here, while Hazel Lavery socialized and thought of renting, Lavery worked.

Spring arrived early on the Riviera, and few gardens were quite so abundant as those surrounding Villa Sylvia. Built by Ralph Wormeley Curtis and his wife, Lisa Colt Curtis, the firearms heiress, in 1902, the Italianate house was named after their daughter. Here Sylvia Curtis (1899-1972, later Mrs Alexander Steinert) spent her childhood (fig. 1). The garden was well matured by the time of Lavery’s visit in 1921, and at least three canvases are known to have been painted there. One, The Japanese Garden, Villa Sylvia, 1921 (private collection), shows the Japanese incense burner that features in Sylvia Curtis’s watercolour.

Two further canvases reveal an informal ‘English’ planting scheme in which green avenues open to reveal colourful beds and shrubs. The swift sketch in the Ulster Museum, (fig. 2), shows one such vista, while in the present, most elaborate example, painted later, perhaps, on the same afternoon, the artist moves closer to the same group of trees to discover a tea party in progress. The relaxed ambiance of pre-war Edwardian garden gatherings has been reborn and with its sumptuous villas, grand hotels, casinos and fashionable sanatoria, the south of France is reclaiming its hold over the European beau-monde.

Edwardian travel writers had observed that the area around Cap Ferrat and Beaulieu had attracted 'wealthy and leisured people', who 'come here to be quiet, to pass the winter in favourable surroundings and while not disdaining pleasure are not given to undue excitement' (W. Scott, The Riviera, A&C Black, London, 1907, p.94). These hivernants were of course accompanied by Impressionist and Fauve painters – Monet, Renoir, Matisse and Derain. More recently, cannonades on the Western Front had suppressed their joie de vivre, and the grand hotels had struggled. By 1921, however, these pleasure-seekers are poised to return, and we are but a year away from the inception of the famous first class ‘train bleu’, that would speed the Scott Fitzgerald smart set to the celebrated watering-holes of Cannes, Nice and Monte Carlo.

As always, Lavery was thinking ahead. That spring and summer he was preparing for an exhibition organized by the Chenil Gallery, but to be held in the larger premises of the Alpine Club off Conduit Street in London’s West End. A joint show with Hazel’s drawings and paintings, it was applauded by critics for ‘the absolute truth of the colour impression that makes each of his landscapes so homogeneous and complete’ (The Observer, 23 October 1921, p. 10). In his foreword to the accompanying catalogue and with his own recent first-hand experience in mind, Churchill noted that Lavery:

'… shows us sunlight in all its variety… gay and pellucid and pleasurable on the Riviera… We are presented with the true integrity of an effect. And this flash is expressed in brilliant and beautiful colour with the ease of long mastery' (‘Foreword’, Pictures of Morocco, the Riviera and other scenes etc. Alpine Club Gallery, London, 1921, pp. 3-4).

Lavery was of course no novice when it came to works like Spring in a Riviera Garden. One only has to recall his seminal Tennis Party of 1885 (Aberdeen Art Gallery) and the various garden pictures painted in Tangier and at English country houses, to realize that his tête-à-têtes under the trees were the modern equivalent of the archaic rose bowers of the Pre-Raphaelites. As he moves his easel closer, from the grassy sward to the edge of the flower beds under a blossoming canopy, the atmosphere changes. Glare reduces and colour becomes more vivid. Figures emerge with greater clarity and the murmur of civilised conversation around the tea-table becomes his subject. But Lavery, as Cunninghame Graham reminds us, was oblivious to gossip, especially when the scene before him was one of such enchantment.