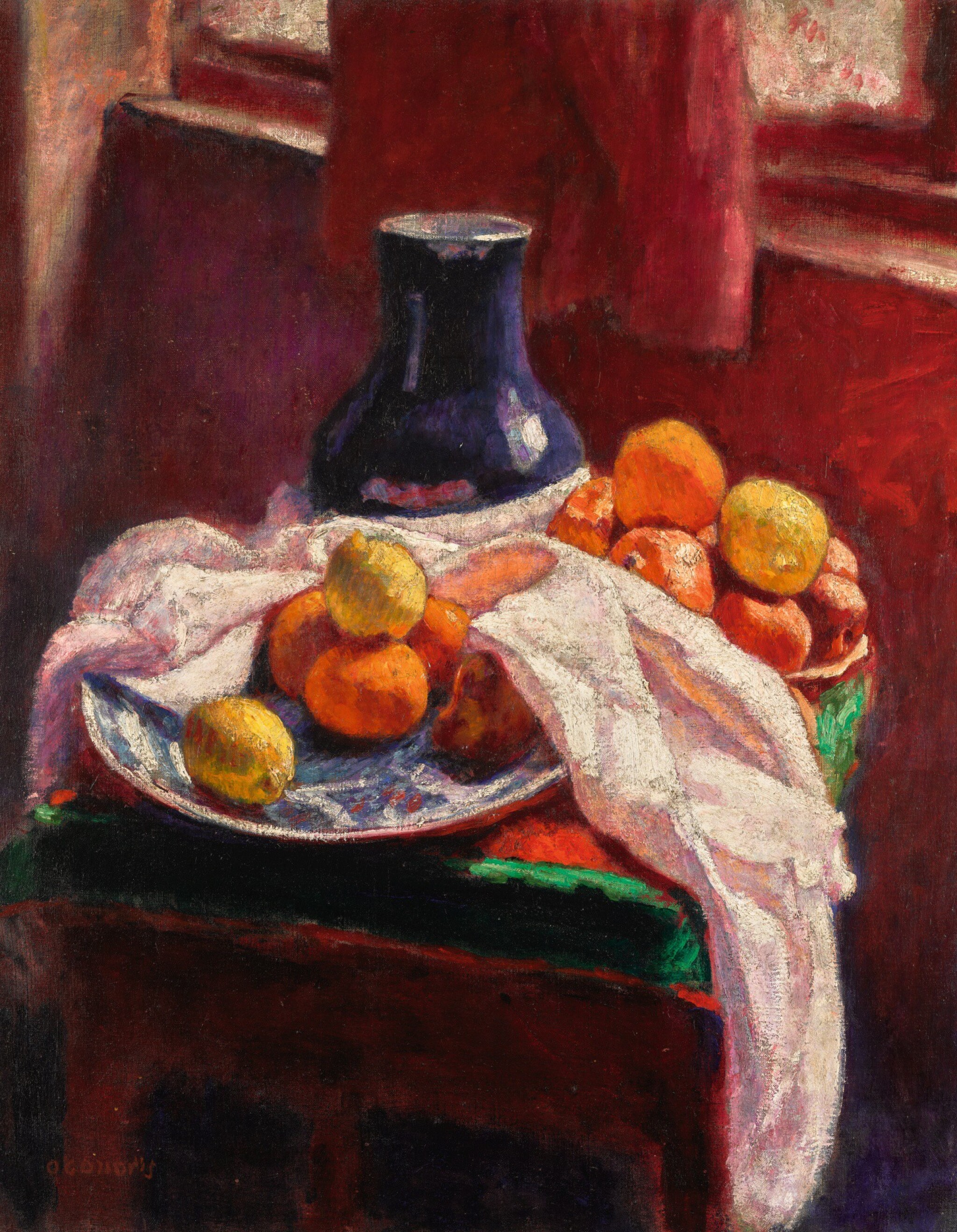 Original canvas. The work has recently benefitted from a light clean and appears in very good overall condition, with some strong passages of impasto to the still life. There are some occassional and minor areas of craquelure around the still life and vase.

Under ultraviolet light the surface is difficult to read conclusively, however there are possible signs of occasional and minor retouchings about the edges and a few minor signs of retouching to some of the fruit. There is a spot of retouching to the left edge of the vase; to one of the fruits near the right-hand edge and two small vertical lines below the centre of the bowl.

Held in a gilt wood frame.

Private collection, U.K., from whom purchased in 2010

To create this ambitious still life in a vertical format, O’Conor set up a pyramidal arrangement comprising two plates of oranges, lemons and pears, a large blue vase and a white tablecloth, which he then positioned near his large studio windows so as to enhance the local colours of the fruit using both direct and reflected light. The warmth and radiance of the fruits’ sharply defined forms contrast with the murky recesses of the room, which have been rendered with a deep plumb colour that lightens in tone between skirting and windowsill, in keeping with the contrejour viewing conditions. The large squat vase, placed centrally and at the point where two diagonals meet, both anchors the composition and acts as a spatial nodal point – the last solid form before the shadows close in.

The care O’Conor lavished on this work has to be set against the context of Paris in the First World War, when artistic life was heavily circumscribed by food shortages, rationing, exhibition cancellations and the removal of masterpieces for safekeeping. As one eyewitness recounted: ‘Soon the whole appearance of the terraces of the Dome and the Rotonde [cafés] altered. The only French artists one saw were those who were physically unfit ... Young and able-bodied men of neutral nations took their places ... Distress among the artists was inevitably great (Charles Douglas, Artist Quarter, reminiscences of Montmartre and Montparnasse in the first two decades of the twentieth century, 1941, 219-220). The enforced six-year break in the Irish artist’s exhibiting record was the biggest in his career to date. That the present work should have been one of the nine that he chose to show at the Salon d’Automne in 1919 would seem entirely commensurate with its scale and impact.

Having decided at the outbreak of war to stay in Paris and continue painting, O’Conor was obliged to focus on studio subjects. He had time to reflect on the time-honoured tradition within which he was working, stretching back to eighteenth-century masters of the still life genre such as Jean-Baptiste Chardin. The latter’s celebration of everyday foodstuffs and household objects, picked out in limpid beams of light, found a contemporary echo in the present work, with its plain unadorned setting and humble materials. The point at which O’Conor departed, however, from his forebear’s asceticism was in his deployment of a much brighter palette, accentuating the colours at the warm end of the spectrum – orange, red, yellow, purple – just as he had done in his Breton landscapes and seascapes of the 1890s. Finally, as if not wishing to rely on the fruit alone to create a strong statement, he extended the white drape down beyond the leading edge of the table, bestowing an almost tangible presence on this unifying and radiant feature.

We are grateful to Jonathan Benington for kindly preparing this catalogue entry.