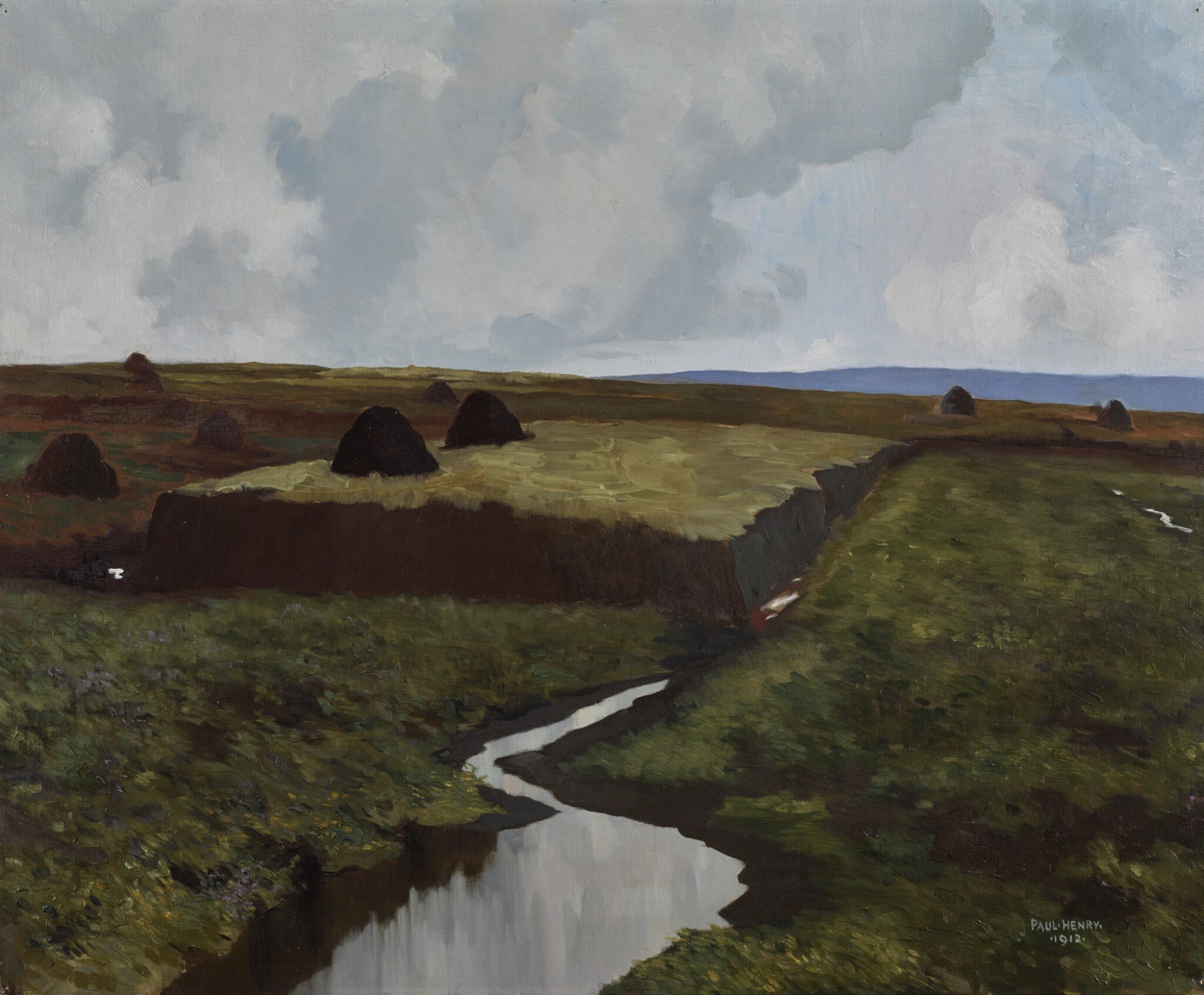 Original canvas. The work appears in very good overall condition. There are artist's pin holes visible in each corner, and a couple of minor abrasions in the lower right corner. The work has recently benefitted from a professional clean and is ready to hang.

Ultraviolet light reveals some minor retouching along the upper and right edges. A few minor spots above the horizon near the left edge and near the lower right corner. Some further occasional areas fluoresce near centre of sky and near pool of water in foreground but difficult to assess if these are retouchings or artist's pigment.

The Mullin family, Birr, probably acquired from the artist c. 1912-13, and thence by descent;

Arriving on Achill Island for the first time in 1910, Paul Henry reflected how he could not help but allow ‘the atmosphere and the spirit of the place take complete possession’ of him (Paul Henry, An Irish Portrait, London, 1951, p.52). Stimulating an extraordinary body of work, Henry translated the wild beauty of the Achill landscape onto canvas; employing a refined, organic palette influenced by his direct experiences of post-impressionism while studying in France.

Dated 1912, the present work is an early example executed within two years of his arrival on the Island. Not only is the early date and large size of the present work distinctive, but also the prominence Henry gives to the subject of bog-cutting - an essential trade for inhabitants of rural Ireland. In works such as the present and in his portrayals of aged, toiling workers in paintings such as The Potato Diggers (1912, National Gallery of Ireland) and The Turf Gatherer (1911, private collection), Henry gives important recognition to the realities and hardships of working in this remote part of Ireland. In doing so, they reveal the influence of the rural realism and en plein-air painting of Jean Francois Millet whom Henry admired as a young man (see for example Millet, Potato Planters, c.1861, Museum of Fine Arts, Boston). In Achill Landscape, the figures are absent but the toil of their labour is clear. A large cut bank of the bog occupies the centre of the composition, around which escaping water snakes across the marshy ground. Several cut peat stacks stand in the background and the scene is cast with a cool, natural light.

Achill Landscape exemplifies Henry’s skill of capturing the Irish wilderness at its purest. Although the precise setting is not known, it 'may look south from Lough Acorrymore, a few miles west of the village of Keel in Achill’ (S.B. Kennedy, Paul Henry with a Catalogue of the Paintings, Drawings, Illustrations, London, 2007, p.170, no.370). The scene exudes a sense of quiet stillness, but there is no stagnancy in Henry’s canvas. The clouds that billow overhead are reflected in the water below as they pass silently above the horizon, and the day's soft light is picked up in subtle tonal shifts in the landscape.