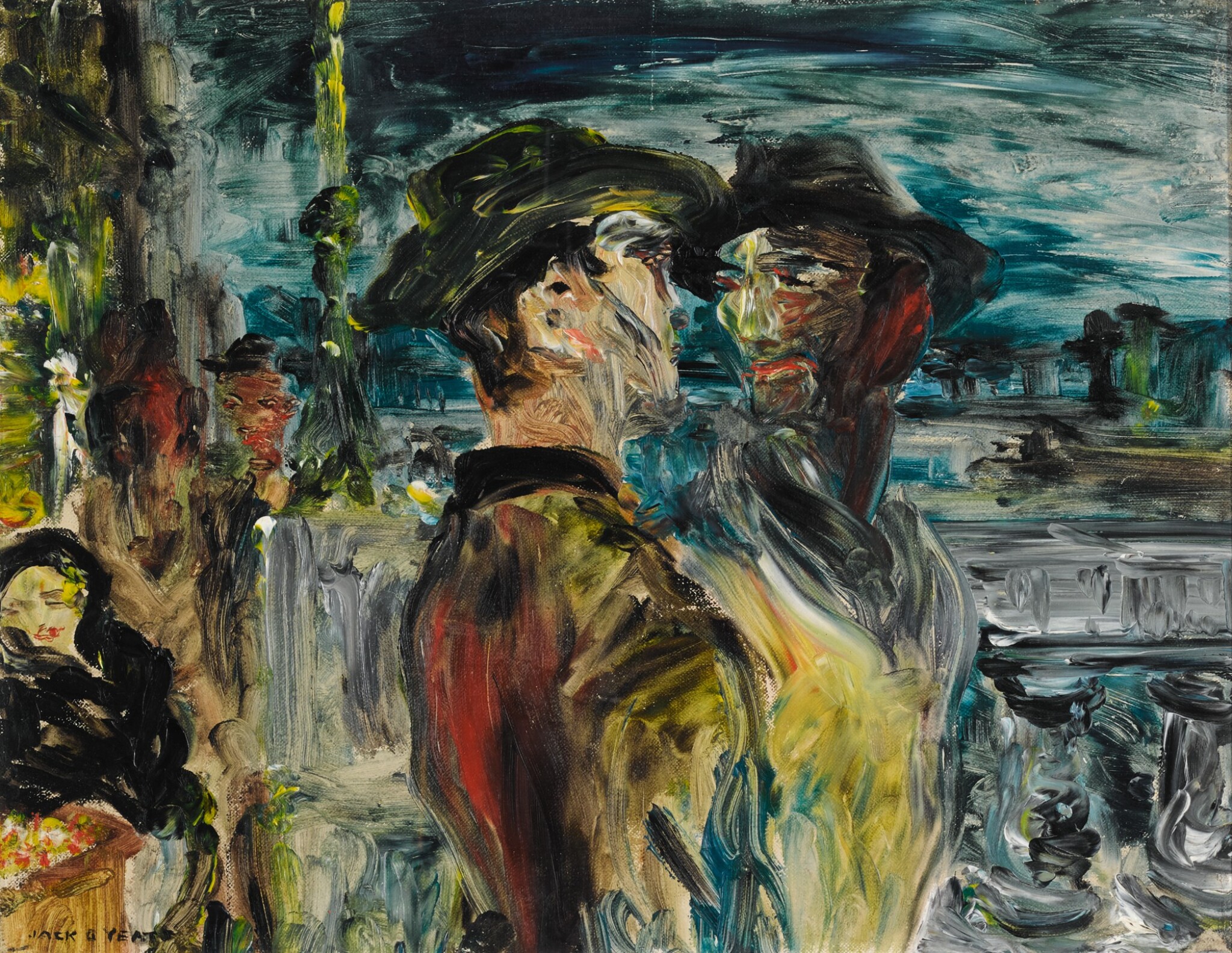 There is a minor stretcher bar mark along the lower edge, only visible upon closer inspection. There is a vertical surface abrasion near the centre of the upper edge, which may be contemporary to the time of painting.

Held under glass in a gilt plaster frame; unexamined out of frame.

Returned to Mrs MacBride in 1953 in exchange for Each Man's Thoughts are His Own;

The painting shows two young men standing on the Liffey quays in the centre of Dublin city. The stone balustrade of O’Connell Bridge and the base of one of its distinctive cast iron lamp-posts are visible behind them. In the background, the black outline of the wrought iron Loopline railway bridge which spans the river can be made out. The city is full of movement and activity. A blonde woman in a black shawl sits beside her container of fruit which she is selling to passersby. Beyond a man in a flat cap looks on. The fluid brushstrokes indicate the movement of light and air and convey the dynamism of the urban landscape.

The relationship between the two male figures is ambiguous. One glances backwards, his skin a dark tone. He wears a muffler round his neck and a pale coloured shirt. The other figure looks straight ahead. His skin is paler and his dress more formal indicating that he belongs to a different social class. While unaware of each other, both appear thoughtful and confident. The lower viewpoint of the perspective makes them appear large and imposing. The darkening sky encloses them as if evening is falling.

The thick murky application of paint with its mixture of browns, reds and blacks is typical of Yeats’s work of the late 1920s. This was an interim period between his early realist style and his later expressionist work. The title Young Men indicates a sense of the future and conveys an optimistic and positive representation of Irish manhood. The work was painted and exhibited in Dublin and London just seven years after the foundation of the Irish Free State. A positive review of the exhibition in Dublin, which included such works as Going to Wolfe Tone’s Grave (1929, Private Collection) and Farewell to Mayo, (1929, Private Collection), wrote positively of Yeats’s work which it declared, ‘aims at something deeper than mere reproduction on his canvas of a pretty face or a lovely bit of landscape. All around him in our everyday life, he is catching his impressions and messages, and these afterwards … makes the subject of a painting’.1 The writer James Joyce bought two of Yeats's paintings from the same exhibition as Two Men was shown at in the Alpine Club in London in 1929.

The painting was bought directly from the artist by Lucia MacBride (1880-1970) in 1935. Mrs MacBride was an Irish American who founded the Ohio Woman’s Suffrage Association and later served as the only female member of Cleveland City’s Planning Commission. She was an important collector of modern art, bequeathing part of her collection to the Cleveland Museum of Art. She donated this painting to the museum in 1941 but later exchanged it for another Yeats’s painting in her possession. Lucia MacBride may have empathised with Yeats’s sympathetic portrayal of the ordinary citizens of Dublin in this painting. She was active in many social causes in Cleveland especially those concerning health, education and family planning.

We are grateful to Dr. Róisín Kennedy for kindly preparing this catalogue entry.