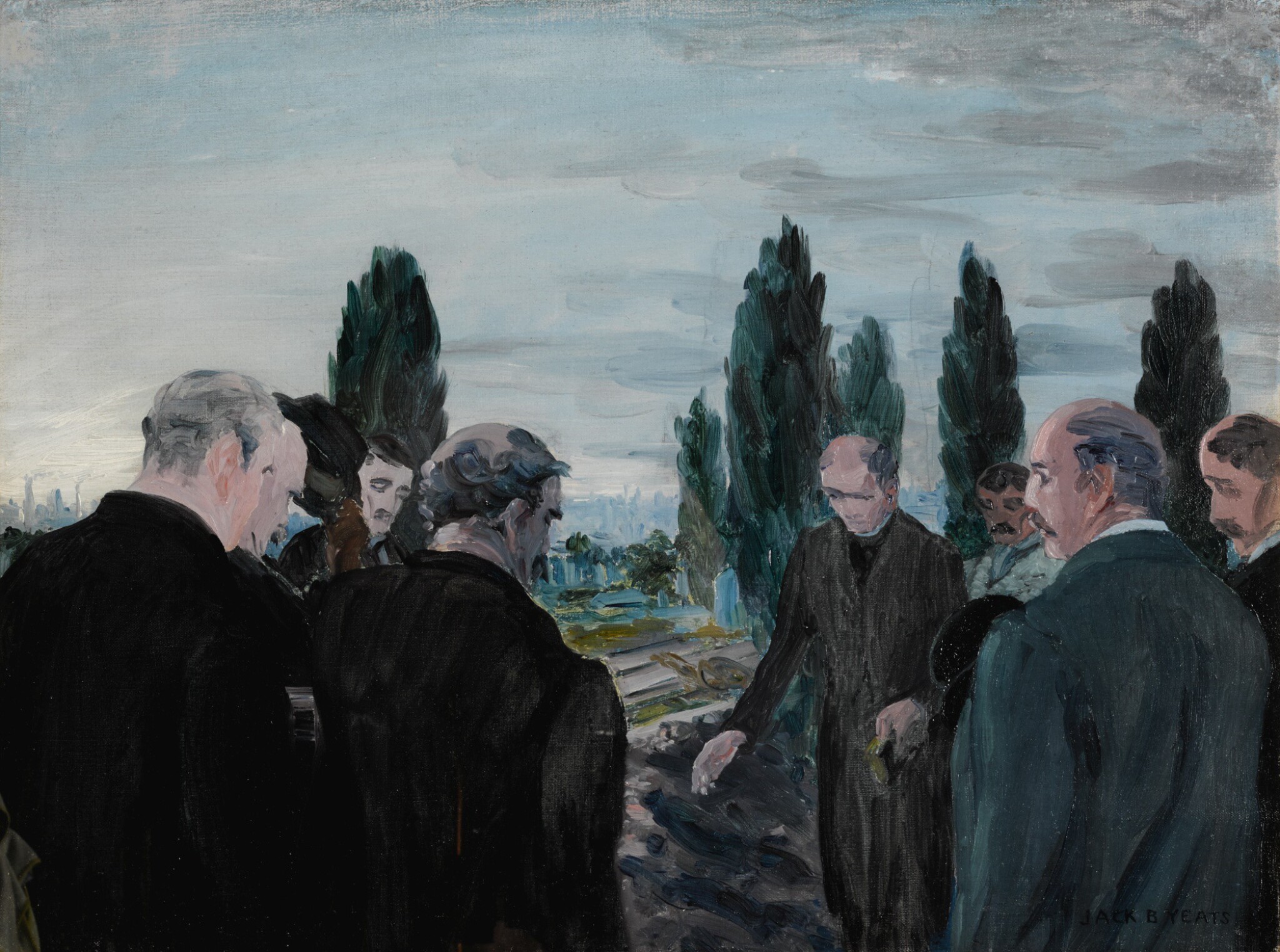 Original canvas. There are some minor frame abrasions to the lower and right edges, and to the upper corners; otherwise the work appears in very good overall condition.

Under ultraviolet light there appear to be some small retouchings in each corner and some further minor, isolated flecks of retouching in the sky. Also a few minor flecks to the left of the signature.

Held under glass in a gilt wood frame; unexamined out of frame.

Early Morning, Glasnevin depicts a group of mourners gathered round a graveside. The gentle gesture of the priest blessing the burial place, surrounded by middle aged men dressed in formal suits adds to the solemnity of the painting. The tall forms of the yew trees echo those of the figures. Their verticality denotes an air of tension and stillness. The subtle tones of greys and blues unites the composition. With their bowed heads and serious expressions, the men convey a nobility and restraint in their shared grief. A space between the figures allows us, the viewer, access to the graveside and encourages us to empathise with the mourners.

The identity of the departed is unknown. But the situation of this funeral in Glasnevin cemetery suggests that the deceased may have been a victim of the ongoing troubles or a nationalist figure of some prominence. Dublin was described as a city of funerals in 1923. The Civil War which broke out in 1922, after the signing of the Anglo-Irish treaty, resulted in the violent deaths of many. In 1923 Yeats painted The Funeral of Harry Boland (1923, The Model, Sligo) which he exhibited as A Funeral at the time, perhaps as a way of avoiding the work being perceived as partisan. It depicts the graveside crowds in Glasnevin cemetery at the burial of Boland, a former colleague of Michael Collins, who was one of the first to be killed in the post-treaty troubles. Yeats painted several other funerals in this fraught period. One of the most notable is An Island Funeral (1923, Model, Sligo), one of his masterpieces, showing a coffin being brought for burial from the Blasket Islands, in Co. Kerry. Its political relevance, if any, is undeclared.

A review of the 1923 one-man exhibition in Dublin in which Yeats showed Early Morning, Glasnevin referred to the importance of such paintings at this time in the nation’s history. The writer noted that ‘more important, perhaps, than the prevailing ‘west’ [of Ireland] pictures are some ‘Dublin’ pictures. Glasnevin, Early Morning [sic] is a graveside group, each figure distinct with expression and life-like pose and growing light fully graded’.1 It is the mourners rather than the deceased that is the focus of Yeats’s painting. The heavy man in the right hand foreground is the artist, Dermod O’Brien (1865-1945), a major figure in the Irish art world and president of Royal Hibernian Academy from 1910-45, of which Yeats was also a member. O’Brien, like Yeats, was deeply affected by the political turmoil of these years. Coming from a unionist background, he came to favour Home Rule before the war. He was a member of the Irish Agricultural Organisation since its foundation in 1902. His cousin Mary Spring Rice was involved in the Howth gun-running in 1914, the illegal importation of arms into Ireland by nationalists. The leader of this endeavour and a founder of the new Irish state, Erskine Childers, was executed by the Free State in November 1922. Horace Plunkett noted in his diary in 1923 that O’Brien, ‘is, I fear, most ruined by the Irish Troubles’.2 Such outright despair is not represented in the painting. The allegiances of these figures, if any, is not articulated. They are shown to be united in their mourning and in their dignified observation of the formalities of a burial ceremony.

We are grateful to Dr. Róisín Kennedy for kindly preparing this catalogue entry.

2 Diary of Horace Plunkett, 2 May 1923, National Library of Ireland.