44 Fitzwilliam Square: Works from the Estate of the Late Patrick Kelly 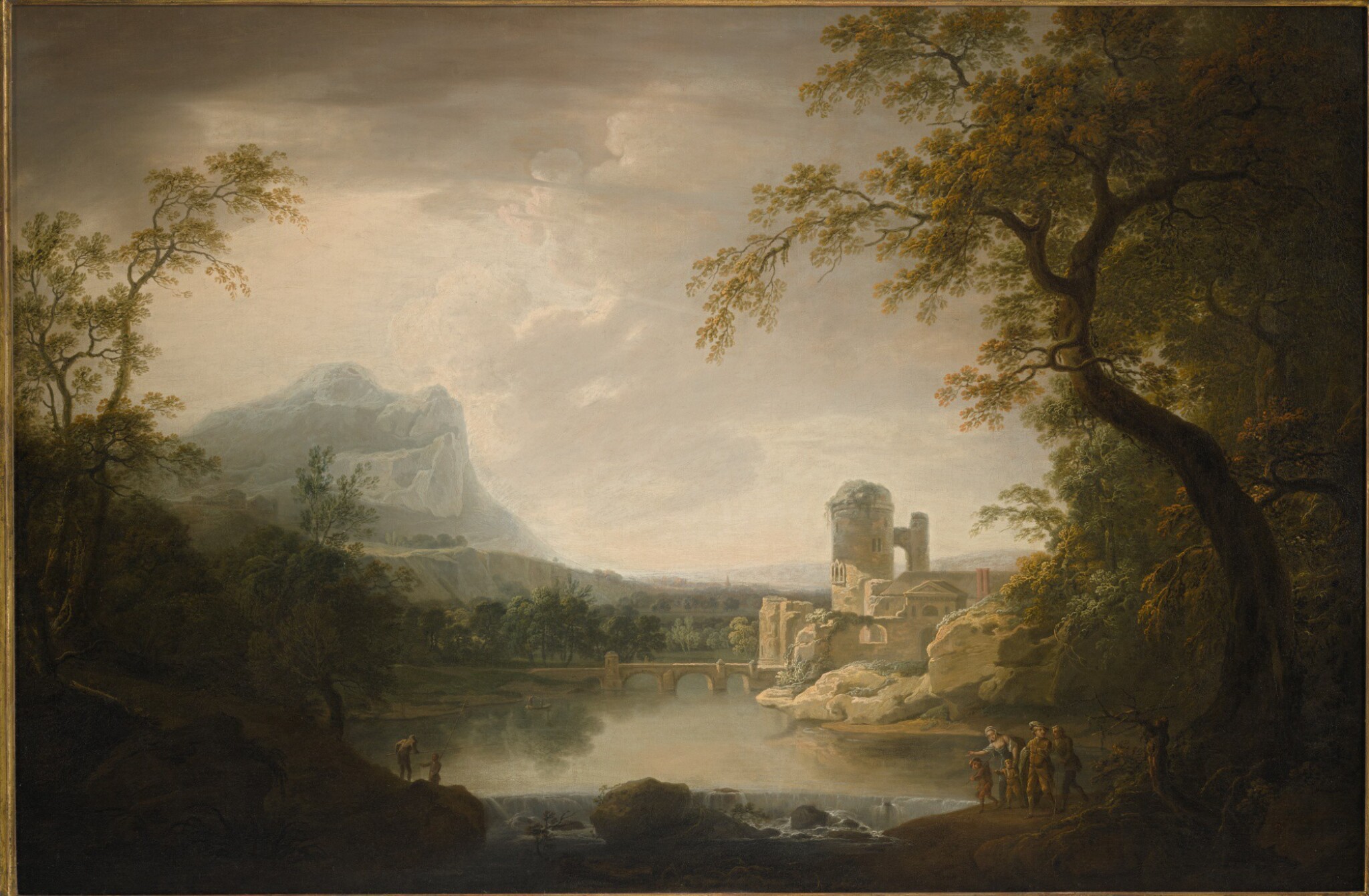 A RIVER LANDSCAPE WITH A GROUP OF FIGURES BY A WATERFALL, WITH CLASSICAL RUINS, AN IRISH ROUND-TOWER AND A MOUNTAIN BEYOND

The canvas is lined which has resulted in the paint surface becoming very slightly thinned in parts, such as some of the darks and sky. The paint surface is clean with a slightly discoloured varnish. Inspection under ultraviolet light reveals small lines of scattered cosmetic retouchings, notably in the darker pigments along and extending in from the left, lower and right margins, as well as in the lower part of the sky along the silhouette of the mountain range. There are a handful of more concentrated retouchings, for example: to a repaired damage in the middleground centre left approx. 20cm. in from the left margin which measures 6 x 4cm; to a repaired tear in the bottom of the tree trunk lower right approx. 6cm. long; and to a handful of spots along the margins, the largest in the right half of the upper margin approx. 4 x 7cm. All these are sensitively executed and do not impede the legibility of the painting, which presents well and is ready to hang in its current state.

With Ben Elwes Fine Art, London, 2007, from whom acquired (as by George Barret).

George Mullins is one of a small and important group of native-born Irish landscape painters, active in Dublin in the 1760s and 1770s, who transformed the art world in Ireland. According to Pasquin he was educated by the elusive James Mannin at the Dublin Society Drawing Schools from 1756, before moving to Waterford where he worked in the porcelain industry decorating snuff boxes. Returning to Dublin, in 1763 he won a premium for landscape painting at the Dublin Society and in 1768 a second premium for a history piece.

During the course of the decade Mullins established himself as a key figure in Dublin art circles, contributing greatly to the development of landscape painting in his native country. Between 1765 and 1769 he also exhibited with the Society of Artists in Dublin and later sent pictures to the Royal Academy in London between 1770 and 1775, where he lived with another important Irish landscape painter, Robert Carver. His wife, who according to Walpole was the sister-in-law of the leading Irish portrait painter Hugh Douglas Hamilton, ran a well-known tavern in Dublin, The Horseshoe and Magpie at Temple Bar, close to the Dublin Society’s drawing school on Dame Street, at which several important young artists lodged. The most significant of these was Thomas Roberts, probably the greatest of all eighteenth-century Irish landscape painters, who was apprenticed to Mullins in the late 1760s and with whom Roberts maintained close links throughout his tragically short career.

Despite his significant influence upon Irish artistic development, very few securely attributed works by Mullins survive. Four signed upright Italianate landscapes, which Mullins painted for the Earl of Charlemont’s House at Marino in Clontarf, Dublin, now belong to the Irish Government and a very similar upright work is in the National Gallery of Ireland (NGI.4619). Another signed work, dated 1772 and entitled The Fishing Party, is in the Ashmolean Museum, Oxford (WA1914.1) and a related landscape was sold in London, Christie’s, 10 May 2007, lot 13. A further landscape, with an almost identically positioned round tower, and a similar craggy rock beyond to those found in the present painting, was exhibited in the 2018 exhibition Exhibiting Art in Georgian Ireland held by the Irish Georgian Society at Dublin’s Assembly House. Both these latter works exhibit what FitzGerald and Cruickshank described as the ‘light and airy atmosphere in his paintings, not found so often in Barret’,1 as well as the influence of his English contemporaries Wilson and Lambert.

Formerly attributed to Mullins’ contemporary George Barret, this recently re-discovered landscape is consequently an important and extremely rare masterpiece. A major work by the artist, it is an exciting and significant addition to the perilously small known oeuvre of one of the great enigmatic figures of Irish art. We are very grateful to William Laffan for his assistance in the cataloguing of this lot and for endorsing the attribution to Mullins following first hand inspection.