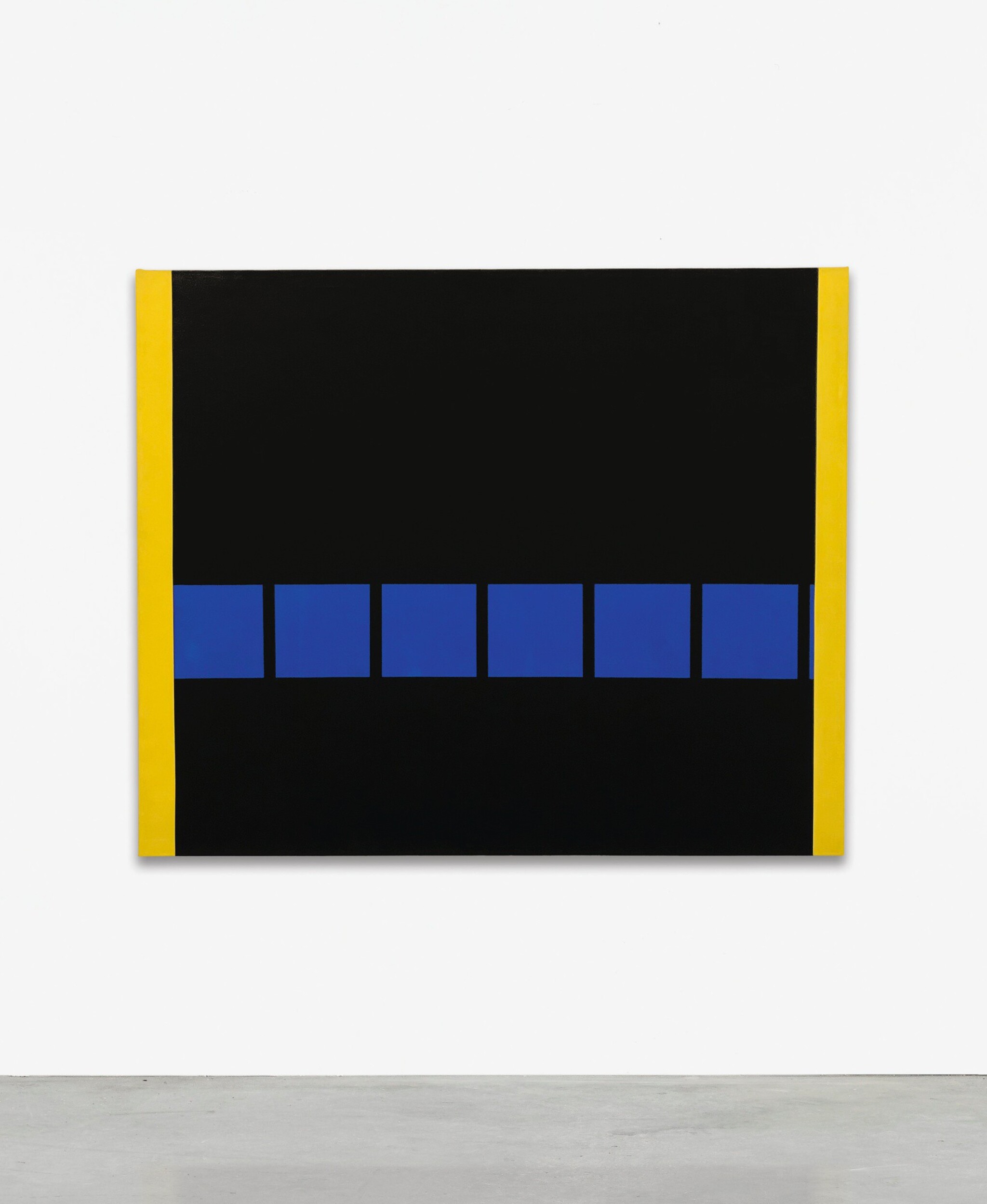 signed, titled and dated MELEHI '63 NEW-YORK on the reverse

This work is in good condition. There appears to be craquelure along the upper left section and on the upper edges of the canvas inherent to the age of the painting. There are some faint water stains that are visible on the blue central squares. There is no restoration apparent when viewed under the UV light.

The catalogue illustration is accurate but the overall tonality is more vibrant in the original work.

Thence by descent to the present owner in 2015

Art histories and ‘the canon’ are indeed subjective, often shaped through the purview of a limited few. Omission within it has subtle effects on our perception of artistic genius and cultural relevance; this is far more in need of our attention – particularly when certain artists and movements are siloed by physical boundaries: the East/West dichotomy is age-old. Melehi is one such artist who requires greater attention. His art captures a post-modern aesthetic with the cultural richness of Moroccan-Berber crafts, driven by the lifeblood of social activism and a commitment to local artistic spirit. Arguably, it is now that Melehi is having his moment.

Mohamed Melehi is a Moroccan artist whose colours, motifs and inclusive cultural inspirations are only recently truly being acknowledged on a global level. The artist’s first UK retrospective in 2019 at Mosaic Rooms entitled New Waves, in a way, served both as an affirmation as much as it did as a turning point in the way Melehi with his artistic and cultural production is understood within an international context.

Born in Morocco, Melehi can be considered as one of the most important artists in the country. A painter, photographer, muralist and designer as well as a teacher and cultural activist, he was a leading figure in the radical Casablanca Art School and a formative leader in the artistic and cultural development of post-colonial Morocco. Melehi was trained at the Accademia di Belle Arti in Rome, where he lived between 1957-1961. He studied further in Spain before accepting a scholarship to study at Columbia University in New York from 1962-1964.

It was perhaps while in New York that Melehi began to develop his own style. The works he produced here differed from the paintings he made in Italy: his lines and forms became clearer and smoother, a nod to Op Art and the clear impression that artists such as Frank Stella and Jasper Johns had on the development of his oeuvre. The hard-edged blocks of colour from Stella and the abstracted, almost ubiquitous motifs of Johns very clearly found their way into Melehi’s visual narrative – all incorporated at a time where these aesthetic paradigms prevailed. His passion for jazz developed in the City and found expression in the almost rhythmic, staccato-esque blocks of colour that make their way across the canvas; its bold musical spirit is embodied in the canvas, in the assurance of his colour delineations. In this work, we may choose to see his New York cityscape, framed within the bright lights of a city that we all know - ‘never sleeps’ and excitingly at the time, was considered to be a hub for post-modern artistic development.

The significance of this painting also lies in the fact that it so clearly illustrates another dimension of Melehi’s creative output: his appreciation of modernist architecture as well as his ability to marry this with his work in graphic art (he later went on to found his own graphic design studio in 1974).

The Blacks is indeed an impressive work – it pulsates with the rhythms of a city that inspired his creative output and its almost poignant significance lies in its concrete like linearity, tied only to the short time he spent in New York. His canvases were soon to be washed with the undulating waves that Morocco inspired.