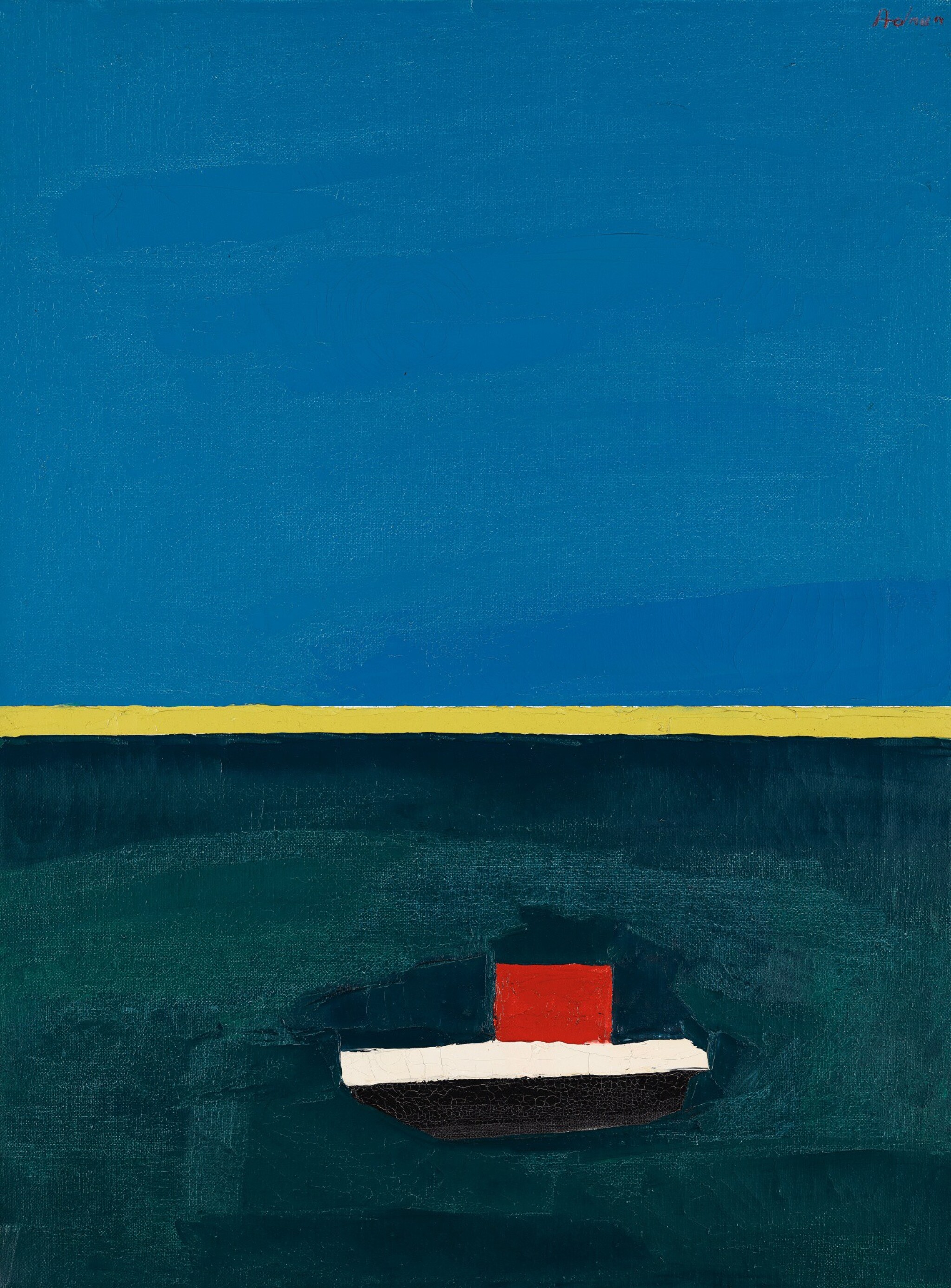 signed Adnan; signed on the reverse

To request a condition report for this lot, please email Astrid.Chater@sothebys.com.

Acquired from the above by the present owner circa 1990

“I became a painter, I immersed myself in that new language. Abstract art was the equivalent of poetic expression; I didn’t need to use words, but colors and lines. I didn’t need to belong to a language-oriented culture but to an open form of expression...My spirit was loose. I understood that one can move in different directions, that the mind, unlike one’s body, can go simultaneously in many directions, that I moved not on single planes but within a spherical mental world, and what we consider to be problems can also be tensions, working in more ways than we understand.”

Etel Adnan, born in Beirut in 1924, is one of the most prominent Lebanese-American visual artists of her generation, and also a well-known poet and essayist. Her mother was a Greek from Smyrna, her father was a petty officer. Educated in French schools, Adnan studied philosophy at the Sorbonne, Paris, and in January 1955 moved to the United States for post-graduate studies in philosophy at UC Berkeley, and at Harvard. From 1952 to 1978, she taught philosophy of art at the Dominican University of California in San Rafael, and travelled widely in the United States to lecture at a number of universities. Her novel Sitt Marie-Rose published in 1977 catapulted her to literary fame. Returning to Lebanon from the US, Adnan worked as a journalist and cultural editor for Al Safa newspaper, a French language publication in Beirut. She also wrote for the well-known L’Orient le Jour. She left Lebanon in 1977 for California where she established herself in Sausalito, although she made frequent trips to Paris. She continues to live and commute between these locations.

Long after she had established herself as writer and literary critic, Adnan discovered her gift as a visual artist. In her practice, Adnan is mainly an abstract artist, moving fluidly between long, accordion-like folio creations which she produced in the 1970s (Leporellos, or concertina fold bookworks), landscapes created and recreated in drawings, watercolour, ceramics, tapestry, and oils, as well as illustrations of poetry. For her, abstraction was a solution, a language that “doesn’t have a language problem” since without doubt her canvases speak universally. Adnan painted her life, her dislocation, a new non-verbal vocabulary. It should not be forgotten that despite her trajectory of multidisciplinary success, Adnan was nevertheless part of a generation of hardy contemporary Lebanese artists such as Huguette Caland and Saloua Raouda Choucair who despite struggles, were triumphantly inspired by the heritage of their roots and similarly able to achieve an individual and authentic personalised style. These artists overcame challenging forces to establish reputations wherever they were, and Adnan was no exception.

Her settled life in Sausalito led to a series of paintings of Mount Tamalpais which was visible from her window. The mountain became an immutable reference point which she drew and recreated incessantly, capturing its moods and seasons. Drawings, water colours and oil paintings in different lights and angles portrayed this subject which became her companion, best friend, and significant other. “Colors,” she said, “exist for me as entities in themselves, as metaphysical beings like the attributes of God exist as metaphysical entities.” Her technique involved firm swipes of the palette knife across the surface of her canvas, laid flat on a table. Her block-like slabs of colour recall the works of Paul Klee or De Stael. As her long-time partner Simone Fattal has said of her practice, Adnan doesn’t depict a mountain, a landscape, a city or place as it appears one time, on one day. She captures its multiplicity, at all times, in one work - the image as it will always be, as well as how it appears in that one moment. To think in these terms, allows one to consider the landscape as a place of memory, of exile, of fragmentation, a place shattered and destroyed but persisting through grief, longing, and the pain of remembrance.

For Adnan, affairs of love, language and war have been recurring themes. Exposed to a medley of languages as she grew up (Greek, Turkish, Arabic, French), she learned the art of shifting easily between modalities. She has exhibited widely, and increased recognition followed her participation in dOCUMENTA 13, Kassel Germany in 2012. She was featured in the 2014 Whitney Biennal and is included in the collections of Museum of Modern Art in NY, the Centre Pompidou in Paris, the British Museum in London, and the Museum of Contemporary Art in Los Angeles, among others. Adnan aspired to her own version of modernism that still referenced the traditional. Hans Ulrich Obrist ably captured this dialectic in his 2014 curation of Adnan’s retrospective at the Mathaf: Arab Museum of Modern Art in Doha, entitled Etel Adnan in all her Dimensions. In 2017 Adnan’s work was included in Making Space: Women Artists and Postwar Abstraction a group exhibition at MoMA. In 2018, Mass MOCA hosted a retrospective of the artist titled A yellow sun A green sun a yellow sun A red sun a blue sun.

Sotheby’s is honoured to showcase a unique work by the artist, epitomising the best features of her abstract works of the 1980s. Her distilled simplicity highlights a coded language that at once projects nostalgia and longing, but with the boldness of Matisse’s cut-outs of the later years. The image references a distant shore, bordering a deep blue sea on which a single ship is journeying, seemingly buoyant and yet far from any destination. The picture provokes more questions than answers: Is the ship lost at sea? What stories does it tell us? It is a masterpiece of its kind, and a rare opportunity to acquire an Etel Adnan from the 1980s.