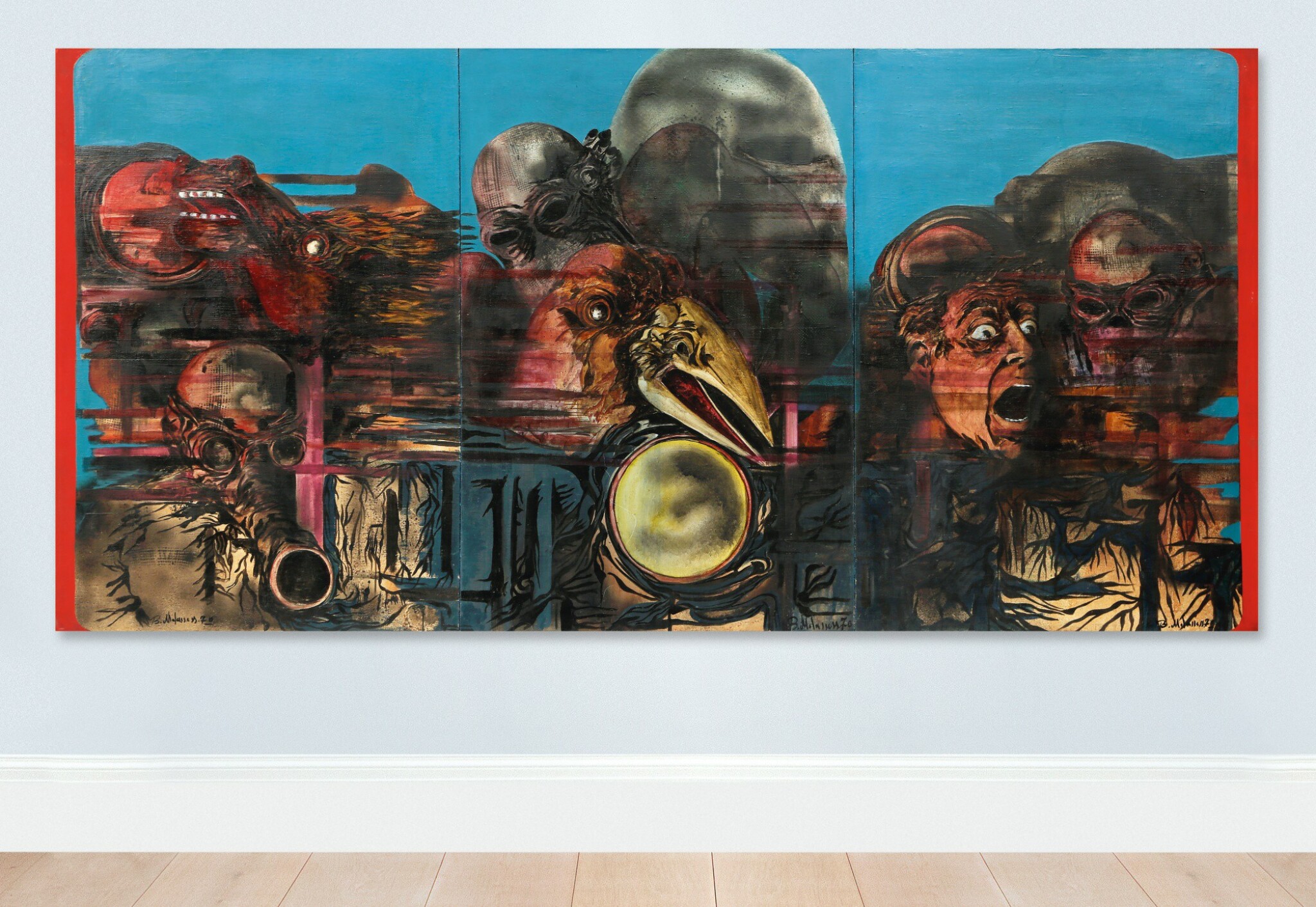 oil on canvas, in three parts

This work is in good condition. The canvas is well stretched. Upon closer inspection, the centre panel has a few hairline scratches on the bottom part. There are some minor pinhole-sized paint losses across the bottom and left edge. Any surface imperfection is in line with the artist’s working process. The varnish is unevenly applied.

There is no restoration apparent when viewed under the UV light.

The catalogue illustration is fairly accurate, with the overall tonality being subtler in the original work.

…And I Tiresias have foresuffered all

Enacted on this same divan or bed;

I who have sat by Thebes below the wall

And walked among the lowest of the dead.

And gropes his way, finding the stairs unlit…

Bahman Mohasses created dystopic, disjointed and disenfranchised figures and realities. Semi-autobiographical and completely reflective of a darker wit and nihilistic, irreverent understanding of the world, Mohasses (posthumously) has cemented his position as a legendary artistic figure.

Ironically, while Mohasses is now understood to be an acclaimed Modern Master and invaluable resource to understanding Iranian Modernism at large, his intention was firmly the contrary. Preferring the periphery, the darkness or ‘liminal’ spaces, he deliberately destroyed his works and evaded mass exposure. Enigmatic and tortured, this is perhaps an expected preference for a man who grappled with his sexuality and sense of rootedness; of national and spiritual belonging.

Tiresias did not know much about the future is a unique and rare work by Mohasses. The frenetic movement that seems to come in hand with angst, is more tangible in this triptych than in any other of his works that have come to auction. While his oeuvre is inhabited by demons or mutant beings, there is a suffocating stillness in them: frozen screams or faceless bodies in a void or vacuum. The audience usually remains on the outside, voyeurs into the mind of the artist. This work on the other hand pulls us in. It is wild, reckless and troubled in its all-consuming subject matter.

An understanding of Greek Mythology allows us to peer into Mohasses’ psyche. Well-read and familiar with the European classics and French intellectual thinkers, it was the Greek legend that served to allay his discontent and give visual expression to his propensity to nihilism. The story of Tiresias varies in Greek mythology. Simply, he was turned into a woman as punishment. His masculinity was returned after seven years, and so the spaces or worlds he maneuvered were liminal. He is understood not least as a complex and tortured figure. However, ultimately, he is one who is ‘redeemed’ and vindicated. Mediating between humankind and the gods, between present and future, this world and the underworld in Greek legendary history, Tiresias became synonymous with ‘soothsayer.’ Some stories believed Tiresias listened to the songs of birds, to understand their language. The title, evidently, suggests the opposite – not even Tiresias was all-seeing, there was no solace. Mohasses’ irreverent and dark perspective is implicit in the title of this work, which so aptly describes the scene before us.

Figures morph, animals are stretched, masked faces loom in the background – and then the bird, Mohasses’ ever present bird, remains in the painting’s focal point. Hovering over what we can only speculate is an oracle, its vacant stare confronts the viewer. These creatures are not of this world and neither are we (at least, this is what we are made to question) – because, what is the world that we live in, is it the world as we know it, as we choose to see it, or a raw monstrous, ill-fated place; the world that Mohasses believes to be our reality? Tortured, disingenuous, layered with pretense – his was an existence full of fear, despair and hopelessness. It was ugly, and in his own words, he sought to glorify the beauty of this ugliness.

It is also perhaps in this work more so than any of his others, that we can see how Francis Bacon’s anthropomorphic figures influenced Mohasses’ artistic output. We see the same twisted and contorted movement. Largely through their stylistic choices: in the paint application, scale and abstracted figures – anguish and pain are redolent.

Mohasses’ intellectual prowess found an outlet in his work as an editor of a weekly art and literary publication. His involvement in a well-known cultural society also enabled him to become part of an avant-garde artistic movement, not dissimilar to the motivations and expressions of the Dada movement.

The presence of a bird, or beaked figure became central to many of Mohasses’ paintings and became a visual embodiment of pessimism and otherness. Interestingly, the essence of this symbology can also be seen in the philosophical underpinnings of Max Ernst’s work, a leading figure in Dada and Surrealist movement.

Both artists’ oeuvres were coloured, in part, by post-war (World War II) trauma – the death, destruction and despair it leaves. Artist Sir Jacob Epstein’s (1880-1959), too, responded to the aftermath of war (albeit, World World I). His bronze sculpture, Torso in Metal from ‘The Rock Drill’ (1913-14) is also a figure that exists in dualities: threatening but vulnerable, a victim as well as a perpetrator. The same menacing nature and machine-like existence can be seen in the figures within Mohasses’ work – both artists see monsters, devoid of humanity.

Similar to Mohasses, Ernst had a dark imagination which came through in many of his paintings and posters. His creative output had Freudian roots, as did many of the Surrealists. As a key figure in the Dada movement, his use of subversive, autobiographical tropes, was not unlike Mohasses – perhaps most apparent in his beaked-figure, known as Loplop. A 1983 New York Times article on Max Ernst describes his reputation as ‘being one of the most gifted, inventive and versatile of 20th Century artists.' It goes on to quote William S. Rubin, who in 1968 wrote: ''in the extraordinary variety of his styles and techniques, Max Ernst is to Dada and Surrealism what Picasso is to 20th Century art as a whole.'' (John Russell, ‘Art View: Behind the Magical Images of Max Ernst’, The New York Times, 4 September 1983, online.) Mohasses too, was considered to be the ‘Picasso of Iran’ and he can also be considered as one of the most gifted artists.

This is a powerful, rare and monumental masterpiece by Bahman Mohasses and a true honour for Sotheby’s to present.