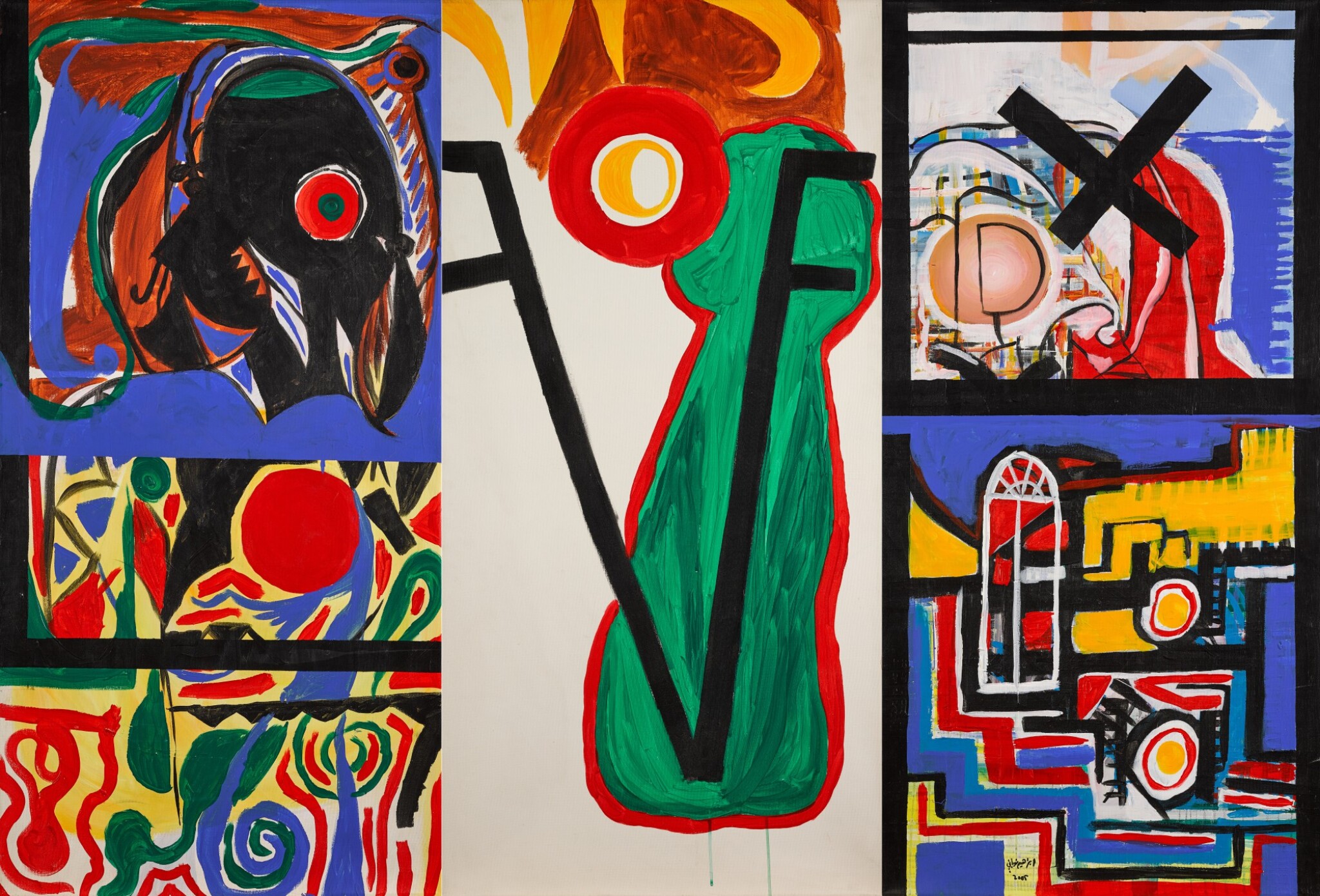 acrylic on canvas, in 3 parts

This work is in very good condition. Upon closer inspection, there appears to be some slight craquelure to the upper centre left edge of the canvas.

This work is in very good condition. Upon closer inspection, there appears to be a stain to the lower right edge of the canvas.

Sotheby’s is honoured to present Ibrahim Nubani for the first time at auction. One of the first students of Abed Abidi, Nubani’s artistic talents should not be diminished and disregarded as a result of fractured social and political considerations.

Born in 1961 Palestinian-Israeli artist Ibrahim Nubani’s life and art embodies the trauma of displacement and lost identity more clearly than most of his contemporaries. That political events played a part in his personal, psychological life as well as in his career as an artist, is an issue he grapples with and discusses publicly.

The title of the work presented here ‘Returning to Haifa’ comes from a book written by Ghasan Kanafani, a renown and respected Palestinian journalist and author. This is significant as Nubani painted this piece in 2005 while living in the city of Haifa.

Nubani’s personal history and narrative is a complex one. He represented Israel in the Venice Bienniale in the 1980s. He was a rising star in both the Israeli and Palestinian art scene until 1987, at the beginning of the first Intifada. It subsequently began to deteriorate. In a sense, he was punished and pushed out of the artistic community: his works were removed from Israeli museums and galleries refused to represent him. Palestinian collectors did what they could to support his career and safeguard his legacy, but it was not enough.

Nubani was diagnosed with schizophrenia in 1988 during the first Intifada, a condition which he has spoken openly about, particularly as it relates to his artistic production. The illness manifested itself in seven known suicide attempts. These internal battles were reflected in a sporadic shifting artistic style, which changed enormously from the 1980s onwards, moving from the abstract geometric renderings, for which he was known, to a more modernist style, then began producing canvases with bold expressive paintwork. While he may have explored different movements, his style remained (and continues to be) anchored in the abstract geometric.

From an early stage, he was a victim of circumstance. Nubani was trapped in a liminal space, living in-between the need to assimilate and an inherent desire to relate to a Palestinian identity, and to ‘live fully’ as a Palestinian – he found solace with neither. He was a rising star in Israel’s art world and was pursuing a relationship with a Jewish woman who refused to marry him – the perceived impossibility of existence became too much for the artist.

In an interview with scholar, Ayelet Zohar, Nubani sheds light on what can perhaps be considered a homogenized understanding of Palestinian displacement – many of us may be more familiar with Palestinian refugees who live in exile, in the occupied territories of the West Bank and Gaza Strip, or in other countries. Nubani is an Israeli citizen, and that carries an additional set of deeply complicated issues.

In 2004, Tel Aviv Museum of Art held an important and successful retrospective of Nubani’s work, entitled ‘In-between’. He is currently living in the village of Al Makker, Israel and continues to produce art