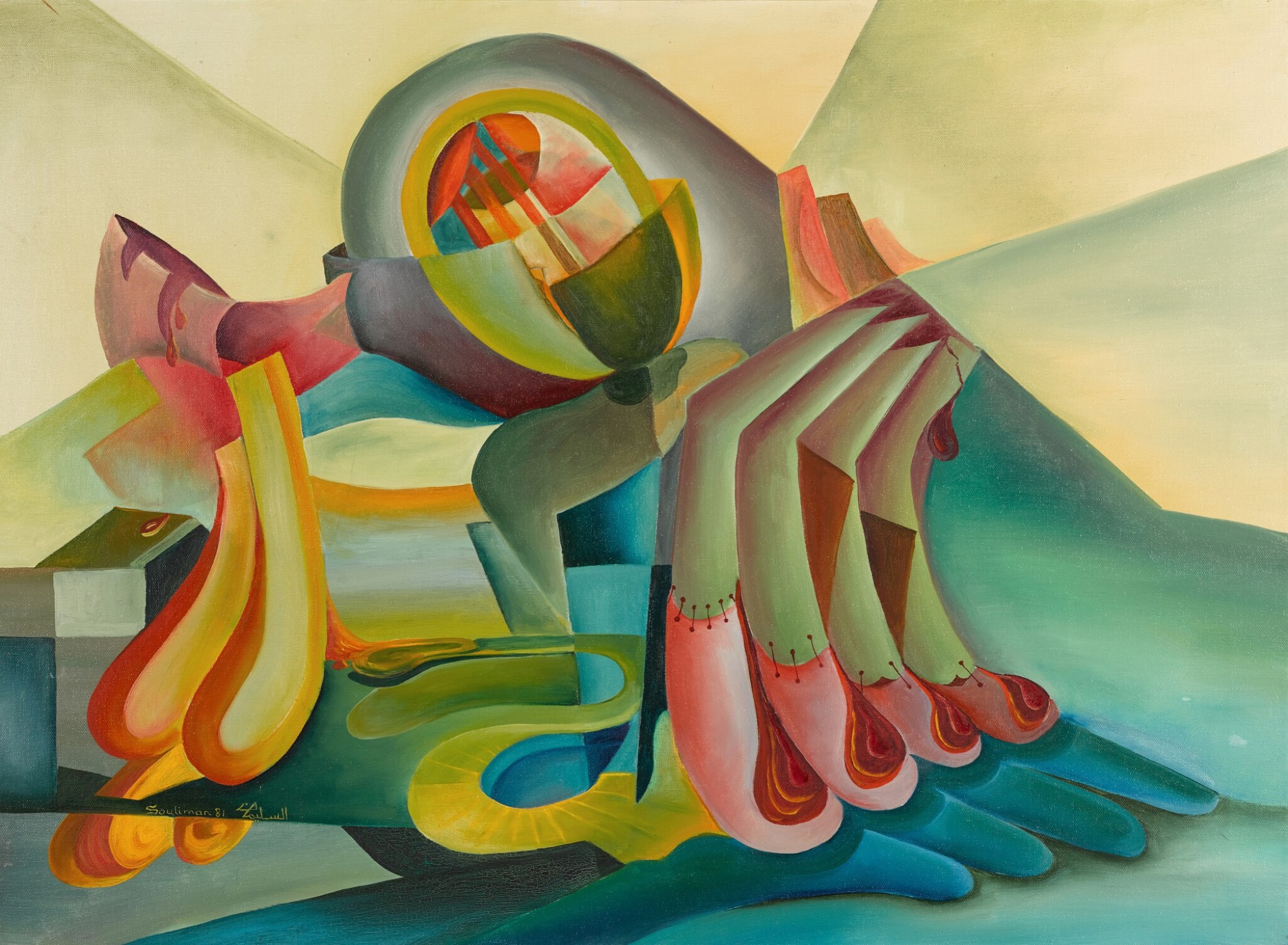 The work is in very good condition. Upon closer inspection, there are some minor specks of paint loss noticeable on the lower right section of the painting, and minor surface dents on the lower left of the work. There is a chip on the inner right frame corner. No signs of restoration under UV light.

Collection of the Artist, Saudi Arabia

Sotheby's is delighted to present an exquisite painting, Nap by Abdulraham Al Soliman. From a series of five paintings completed in one period and in succession, this beautifully colourful and abstracted canvas is a divergence from Soliman’s more familiar angular, cubist renderings – which he departed from in 1981. The vibrancy of palette and curvature of the forms in this painting make it particularly unique.

Al Soliman explains that this body of works is especially representative of the personal and cerebral subjects that preoccupied him. This work shows a human head resting on a low couch, however rather than portraying an external physicality, Al Soliman tries to manifest the inner being. Dreamlike and ethereal, we are taken to a subconscious space – one boasting bright colours and illuminated with joy and optimism. We can not help but see a landscape (the starting point of many of his paintings) and a rising sun. The undulating and repetitive curves and subtle tonal contrasts in his paintwork create a visceral sense of the gentle touch of sunlight on rolling planes. While remaining fundamentally abstract in style, Al Soliman’s intentional curvature of his shapes draws from elements of nature as well as the human body.

Nap has an almost surrealist quality. We are transported to a dreamlike scene, where we see drop like forms which are also meant to suggest a hand connected to the Earth – a dual existence in a sense, a reflection of our subconscious and conscious states. The oval shape in the painting’s centre represents a blooming rose, one which is meant to reflect the promise of a happy and content life – though, once again, we cannot help but wonder if this can also be a head and a window into its many layers.

Abdulrahman Al Soliman’s paintings are created from memory and rooted in a sense of home. Towards the end of the 1970s, Al Soliman began to strongly identify with the “local art” movement. He actively embraced this artistic persona and deeply believed in drawing attention to all facets of his national Saudi Arabian heritage and local memory. His first exhibition in 1973 was organized by Al Itifaq Club in Dammam. He studied and developed his practice alongside the artist Mousaed Al-Ghrami and other members of the ground-breaking Dar Al Funoon Al Sa’udiyyah (The Saudi Art House), the first independent space entirely dedicated to art in Saudi. The members of the group included Mohammed Al Saleem and Abdulhalim Radwi.

Al Soliman’s artistic influences can perhaps best be explained by his multifaceted contribution to the art scene. He is both an artist and author. In his role as an art critic he published The March of Saudi Art in 2000, an in-depth examination of Saudi art which serves as a source of information for many recent articles and young emerging artists. Currently Al Soliman is the Fine Arts Editor for Al Yaum Newspaper and has been in his role since 1983.