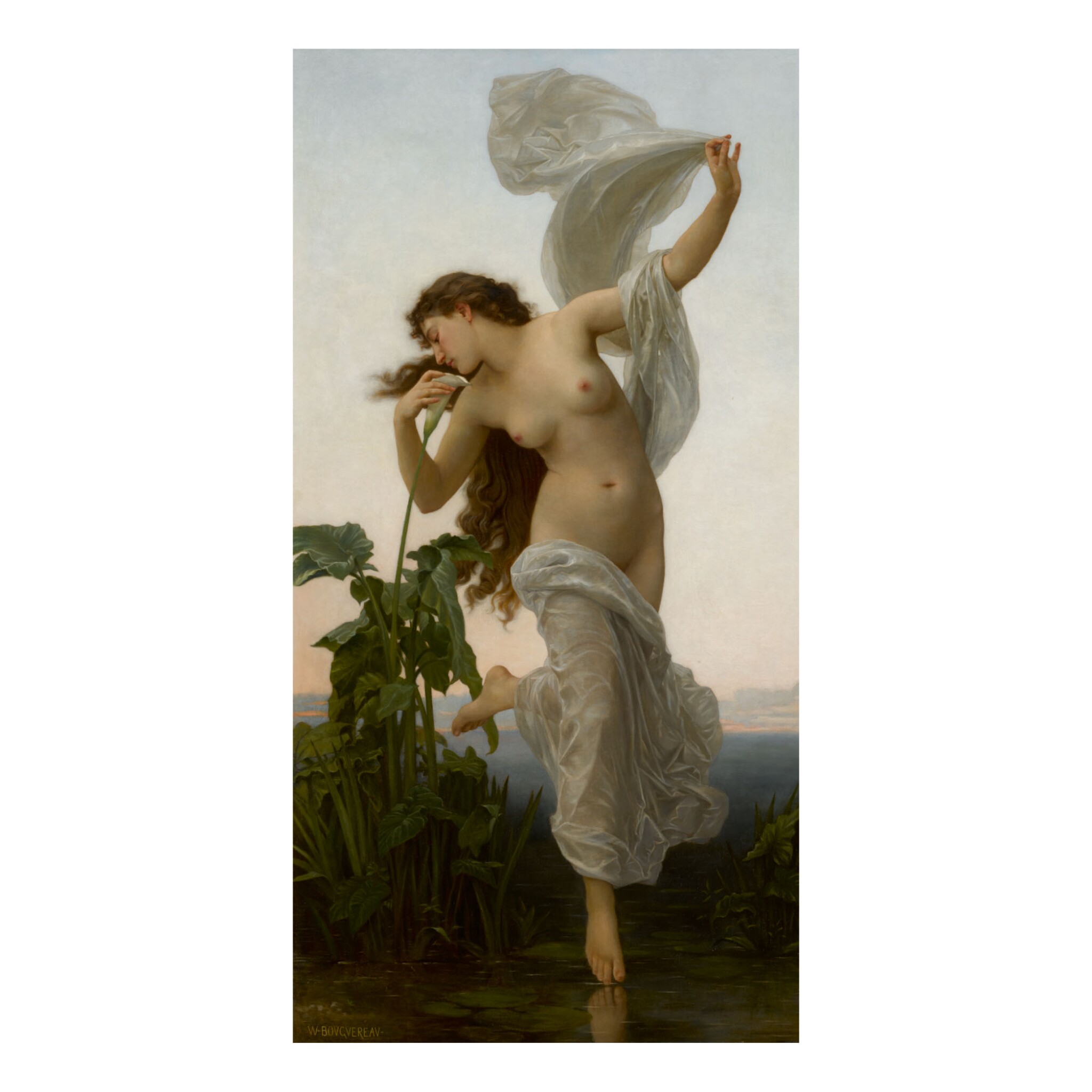 Not examined out of the frame. This work has not been recently restored. The lining is applied with glue, and the stretcher is not original. Very broad retouches have been applied throughout the sky and figure, and these seem to be mostly unnecessary. There are also broad retouches in the white drapery around the figure. The amount of retouching to the work can certainly be greatly reduced.

The condition is ambiguous under ultraviolet light at present. While there is presumably some weakness to the paint layer, it seems likely that the condition would be very good overall if the retouches were removed.

For a full treatment report, please contact the department.

Private Collection (acquired at the above sale and sold, Sotheby's, New York, May 4, 2012, lot 13, illustrated)

Hartford, The Wadsworth Atheneum, The Nude in Art, January 2-February 3, 1946, no. 7 (lent by Sigmund Ojerkis)

Between 1881 and 1884, following the success of Naissance de Vénus (1879, Musée d'Orsay, Paris), Bouguereau embarked upon a series of four panels representing the hours of the day. They comprise L'aurore, (Dawn, 1881, Birmingham Museum of Art, Alabama), Le crepuscule (Dusk, 1882, Cuban National Museum, Havana), La nuit (Night, 1883, Hillwood Museum, Washington, D.C.), and Le jour (Day, Private collection). These works each celebrate feminine beauty and represent an exceptional output in a short period of time by the artist. When viewed together, the purposeful compositional devices and harmonious color palettes of each individual canvas create an extraordinary whole.

In L'aurore, a graceful nymph floats above a pond of water lilies, a symbol of enlightenment that closes with the setting of the sun, and reaches for the trumpet-like blossom of the calla lily, which has long served as a symbol of rebirth and resurrection, a particularly apt choice for this allegory of the new day. L'aurore was the first in the series to be exhibited at the Paris Salon and its particular popularity is suggested by the present work, a reduction of the subject, as well as several finely finished drawings and an etching, the only one the artist attempted himself (Bartoli, p. 204-5). Allegorical works like L'aurore captured the public's imagination, with the writer Edouard Thierry eloquently expressing its appeal: "M. Bouguereau does not conceive art without grace or grace without decency, and I congratulate him for it....  L'aurore is a nimble figure, half nude, half enveloped by a veil which plays in the air. She does not fly, she does not walk, but glides upon the surface of a body of calm water, still quiet, and without causing any ripples. The water remains like a mirror, a mirror barely tarnished by a little morning mist, and to the surface of this mirror rises the reflection of a twin toe coming to caress the other. As she glides along, the goddess graciously inclines her head towards an arum flower which she approaches with her lips, and sips the dew from the white porcelain cone. All this is of very pure taste, and beautifully drawn" (as quoted in Baschet, p. 62).

Bouguereau's studio, which included accomplished artists Pierre August Cot, Alfred Henri Bramtot, and Gustave Doyen, participated extensively in the painting of the reduced versions of his Salon works after 1870. However, Bouguereau always maintained rigid control over his studio, applying the final touches to his works before signing them. In many cases it is almost impossible to differentiate between those areas of the canvas painted by Bouguereau and those worked on by his students, particularly since before adding his signature to any work, the artist would make any corrections he felt were necessary to make the reduction an accurate copy of the original. Records indicate that L'aurore (réduction) was acquired directly from the artist and sold through Goupil's gallery in 1881 as was the reduction of Le crepuscule (sold in these rooms in October 23, 1990, lot 63).