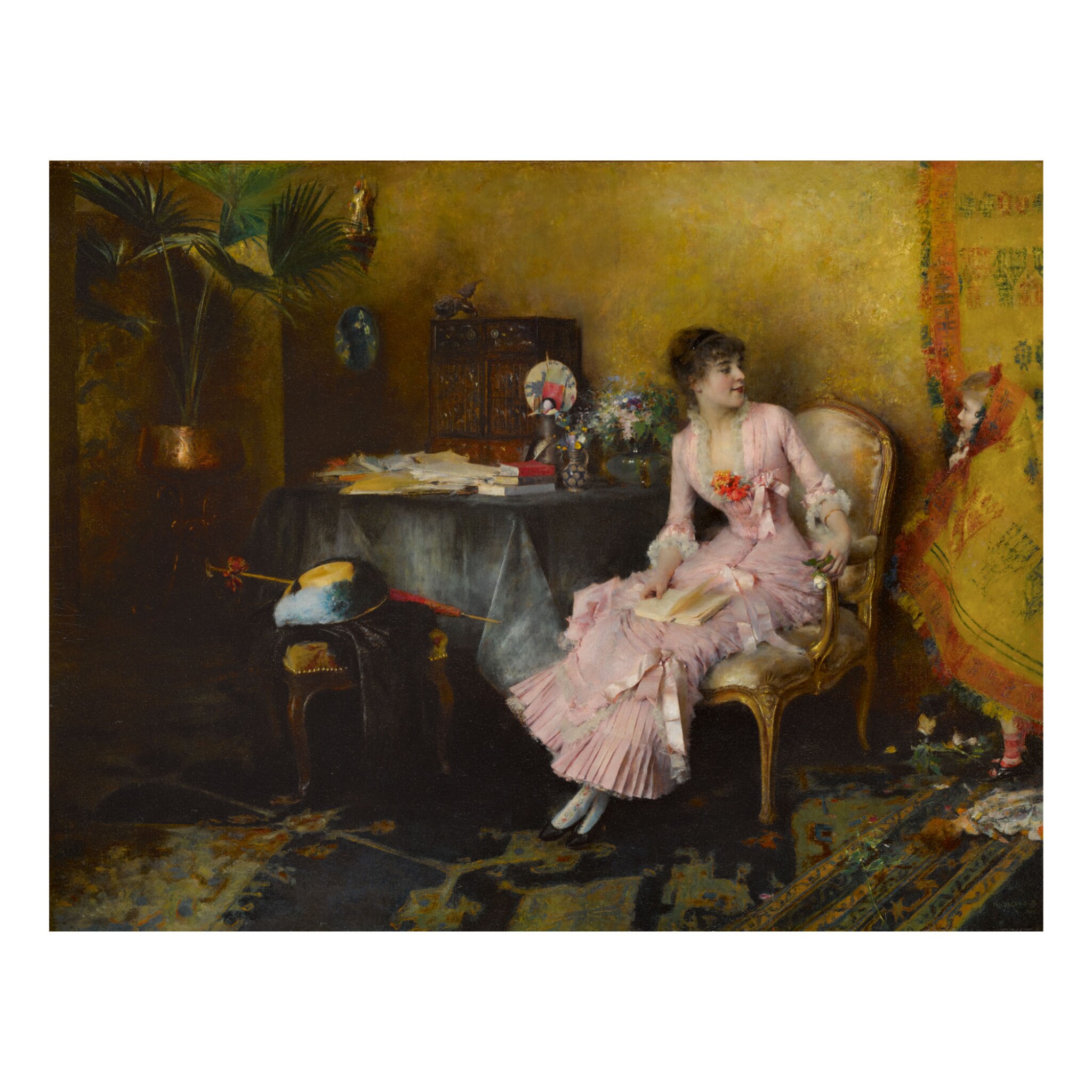 Not examined out of the frame. The work is restored. The canvas has an old glue lining. The surface is quite dull. Although it may not need to be cleaned, it seems the varnish could be effectively brightened. The figure is in beautiful condition, showing no retouches. The figure of the child on the far right is also beautifully preserved. Retouches have been added in the darkest colors around the seated figure's feet, around the hat on the stool on the left side, and beneath the plant on the far left to address some cracking. These retouches are well applied. If the varnish were adjusted, the work could be hung as is.

Private Collection (acquired from the above circa 1940, and thence by descent in the family)

Long unrecorded and recently rediscovered, Jeune femme en rose avec son enfant offers new insight into Pascal Adolphe Jean Dagnan-Bouveret's early career. The paintings of the late 1870s and early 1880s of well-appointed interiors, like Courtois in his studio (1881, sold in these rooms May 5, 2011, lot 41, fig. 1) and Petit Concert (1883), reflected the lifestyle and taste of Dagnan-Bouveret's early patrons. While the young woman and child depicted in the present work are unknown, it was completed the same year as the artist’s 1882 Salon submission Portrait of Mme. G. … B…… (Catalogue Illustré du Salon, 1882, no. 699), depicting the wife of Georges Barbey, a wealthy proprietor from the small village of Corre in the Franche Comté. The increasing number of commissioned portraits (which had previously focused on his immediate family) and the accolades and income received from them positioned Dagnan-Bouveret well through the following phase of his career as he became the standard bearer of Salon naturalism.

Dagnan-Bouveret's characteristic wit and careful eye for detail are on display in Jeune femme en rose avec son enfant, depicting an elegantly dressed young mother in a plush, gilded chair, her open book one of many set on the table beside her. A myriad of objects on the table and mounted on the wall behind reflect the contemporary vogue of japonisme and the cultivated worldliness of the artist himself. A set aside hat and closed parasol suggest the young woman has just returned to her book or perhaps is about to leave, either scenario interrupted by a child playfully using a decorative carpet as a shawl. The pose is reminiscent of his close friend Jules Bastien-Lepage’s Pauvre Fauvette (1881, Glasgow Museums, fig. 2) and well-known to contemporary audiences through its inclusion at the 1882 Royal Academy exhibition, suggesting a subtle commentary by the artist on the popularity of French realist and naturalist painters of peasants among affluent audiences.

We would like to thank Dr. Gabriel P. Weisberg, Professor Emeritus at the University of Minnesota, for kindly confirming the authenticity and providing the catalogue entry for this lot.