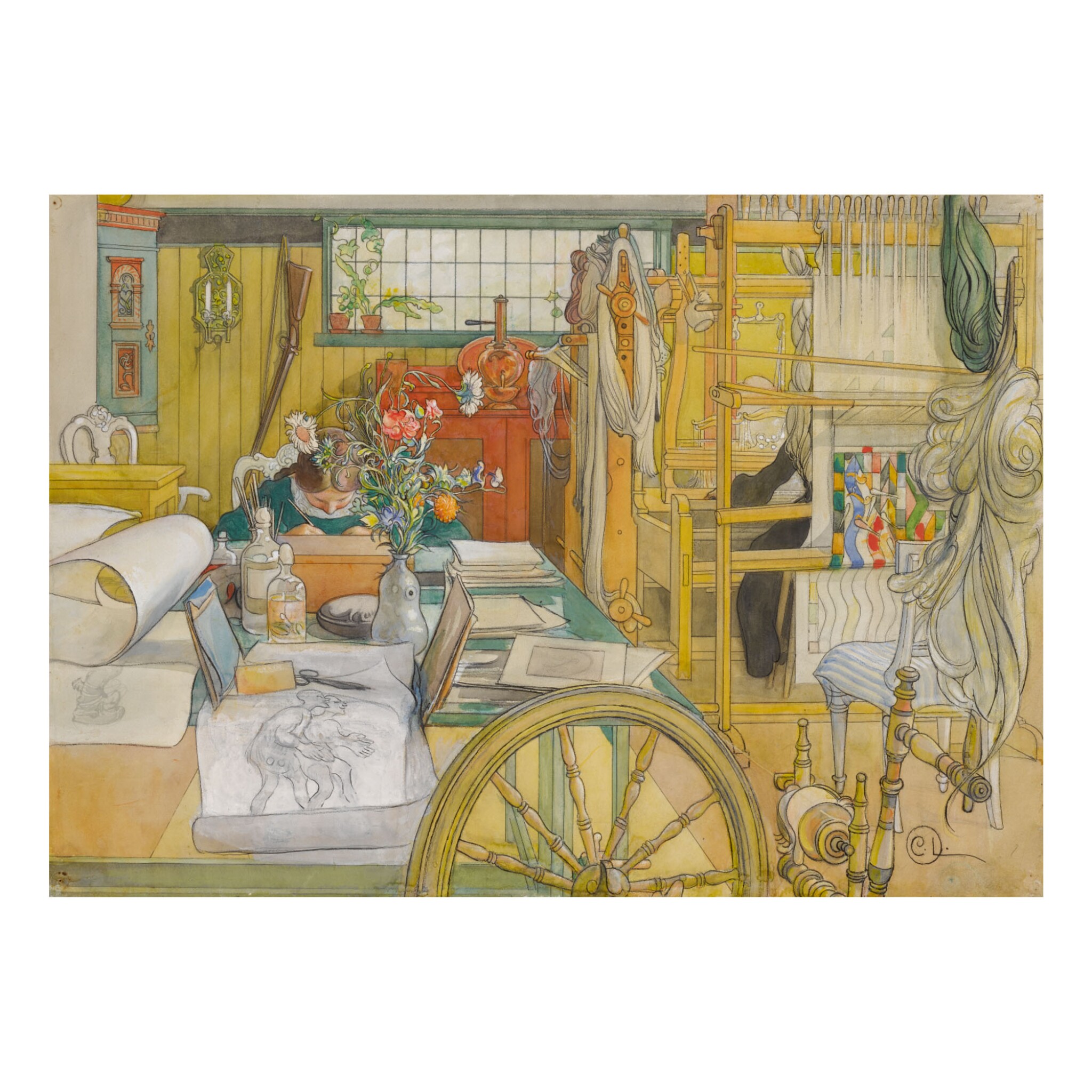 watercolor, gouache and pen and ink on paper laid down on canvas

The primary paper layer is pasted down to a thin lining canvas and wrapped around a 2" wide four piece strainer with nailed tacking edges and framers tape residue. Mild soiling is visible throughout the surface. The paper layer does not present tears, losses, or distortions. There are five original pin holes at the corners from the time of execution. The primary paper layer is faintly oxidized from contact with acidic material and a natural process of aging due to light exposure. This is evenly visible throughout. There is a subtle water tide mark at the bottom near center edge. At the bottom left quadrant there is a presence of some subtle cosmetic surface blending for unknown reasons. Otherwise, although some degree of fading is to be expected for a work of art of this age, the media is well preserved.

Karin Larsson, Sundborn, Sweden (acquired from her husband, the artist, 1920)

Brita Friedrich, née Larsson, Falun, Sweden (by descent from the above, her mother, 1928)

Ulwa Neergaard, Sundborn, Sweden (by descent from the above, her mother, 1957)

Dresden, Kunstsalon Emil Richter, no. 4078 (according to a label on the reverse)

Painted in 1908, the present work depicts Brita, the fourth of Carl Larsson’s seven children, deeply immersed in writing postcards at a giant table in the family’s workshop. The scene is set at Lilla Hyttnäs, the Larsson family home in the rural landscape of Sundborn, in the Dalarna region north of Stockholm (now known as Carl Larsson-gården and a popular tourist site). The room is enlivened by the small details that reveal the character of the inhabitants: half-rolled drawings, piles of matted prints, a vase of wildflowers and a jar of brushes are scattered across the tabletop. The right half of the room is engulfed by a loom, at which a black clad figure, likely the artist’s wife Karin, is seated, glimpsed among the skeins; a version of her Four Elements tapestry is visible, which was completed and hung above the sofa in the dining room of the home where it remains today (fig. 1).

Lilla Hyttnäs was gifted by Karin Larsson’s father to the couple in 1888. When the family took up residence in the home, it was a summer residence only. In 1890, Larsson added a studio and a porch on the main entrance. By 1899, a new and significantly larger freestanding studio was built and the old studio became a workshop for Karin and the children and a place for domestic industry. In 1901, the Larssons built rooms to connect the old cottage and new studio and took up full-time residence (fig. 2).

Lilla Hyttnäs was a joint passion for Carl and Karin, and the interiors and decoration of their home played a large role in Larsson’s artistic output. Reacting against bourgeoise Swedish taste — royal palaces had been decorated by French and French-trained artists, much in the style of Louis XV and Louis XVI —and embracing the British Aesthetic movement, which reacted against the ornate darkness of Victorian decorating ideals. The home’s focus on light, simplicity and nature represented not only a Swedish domestic idyll but a representative of Swedish style.

From the 1880s onwards, the central theme of Larsson’s oeuvre was the story of his own life; his most recognizable models were his wife and children and his most successful works depicted the everyday moments of his domestic life. Beginning with De mina in 1895, Larsson published a total of five books, each containing between twenty-four and thirty-two color plates and documenting the charmed existence of his family and the countryside in which they resided. Larsson wrote of his decision to share his home and family with the Swedish public, “I decided to get busy at what I had been dreaming of for a long time – to draw souvenir pictures from my little home. I thought it would be a kind of family document. (Well, really, it was Karin’s idea: with a view to giving me something to do one summer when it rained for six weeks without let-up and I was restless and unbearable)” (as quoted in The World of Carl Larsson, p. 32).

The present work was created as part of a portfolio of twenty-eight watercolors for Åt solsidan, published in 1910. The portfolio was exhibited widely throughout Europe, both as a group and as individual sheets, between 1909 and 1914, adding to the fame of the domestic scenes printed in Åt solsidan. Larsson reworked this composition at some point after the 1910 publication of Åt solsidan, in which Britta’s legs and those of the chair are visible at lower center (fig. 3). The large pencil study of two figures that covers Britta's leg area is related to Larsson’s most famous – and infamous – composition, that of Midvinterblot (Midwinter Sacrifice) (fig. 4). The same year that Åt solsidan was printed, Larsson submitted a sketch for Midvinterblot, an enormous life-size mural for the Stockholm Nationalmuseum that he believed would complete his decorative scheme. In 1908, the artist had completed the epic 23 by 46 foot Gustaf Vasa’s Entry into Stockholm on Midsummer Day, 1523 in the museum’s main stair hall (fig. 5). Larsson fought a bitter campaign to have the art authorities accept his controversial mural; despite the support of friends, notably fellow painter Anders Zorn, Larsson finally admitted defeat in the face of widespread opposition in 1916, and Midvinterblot did not find its permanent place on the walls of the Nationalmuseum until 1997.