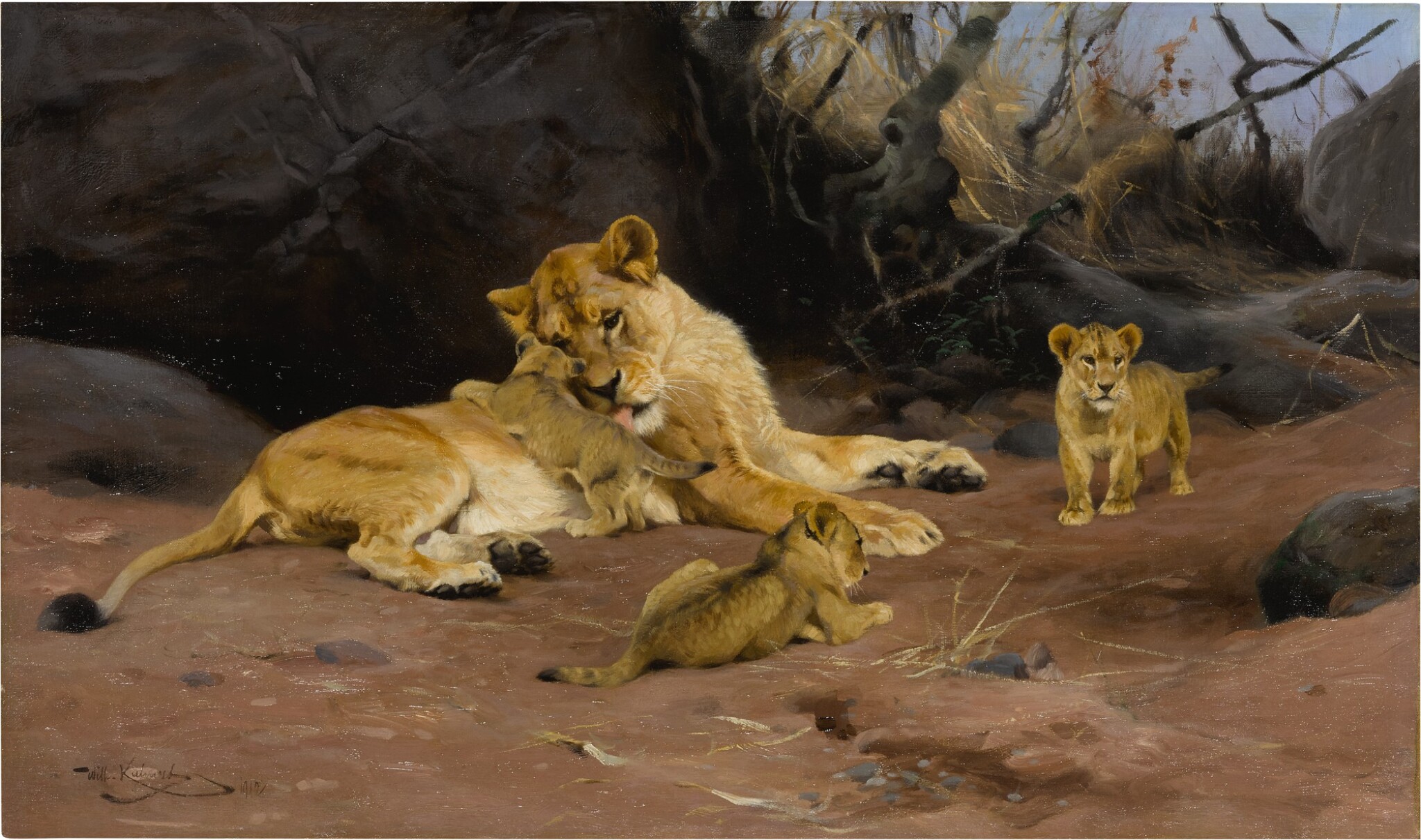 A LIONESS AND HER CUBS

The authenticity of this work has been confirmed by Dr. Angelika Grettmann-Werner who will be including it in her forthcoming Kuhnert catalogue raisonné (WV no. 3012).

This work is lined and well stretched on its stretcher. The paint layer is clean and stable. Under ultraviolet light, very small restorations are visible in the lioness and her cubs, and there is a larger group of retouches in front of the nose of the cub in the lower center.

Private collection (acquired from the above, March 23, 1990)

In the late nineteenth century, any young artist interested in painting animal subjects was encouraged to visit one of the many zoos which were fast becoming popular across Europe. The zoos of Dresden and Berlin were by far the most well-known, and had provided "models" for many important German animal painters such as Paul Meyerheim, who was Wilhelm Kuhnert’s teacher. While capturing the exotic appeal of lions, tigers, leopards, and other creatures, the resulting works were often based on aged or sickly animals, and the painted African landscapes they inhabited were the result of pure imagination. Dissatisfied with these methods, Kuhnert followed the example of Germany’s celebrated animal painter Richard Friese, who advocated the study of wild animals in their native habitats. In 1891, Kuhnert would become one of the first European artists to travel to the German colonies of East Africa (present day Tanzania, Burundi, Rwanda, and part of Mozambique), where he made oil and pencil sketches of the wildlife and terrain. Upon his return to his Berlin studio, he used those sketches to create his panoramic paintings of the savanna. By the early 1900s, demand for his impressive depictions led Kuhnert to return to the German colonies, as well as the British territory of Sudan, on expeditions that lasted months or longer than a year. By then, he had refined his working process in order to create powerful works like A Lioness and her Cubs, painted in 1912 after his fourth and final trip.

Of all of Kuhnert’s animal subjects, lions were a particular favorite, and his deep connection with the animal earned him the nickname "Lion-Kuhnert." In the present work, he captures the animals at eye level, inviting the viewer for a close look at the lioness nuzzling one of her playful cubs as her large paws extend toward the second. Using strokes of color and texture, Kuhnert’s light brush forms the variegated tones of the great cats – as well as the ruddy, scrabbly ground, and cool shade of the rocky background. Kuhnert’s realism formed from first hand observation coveys both the tenderness of the scene and the majestic power of even the youngest cub.

Throughout Kuhnert’s lifetime, his compositions were eagerly sought after by collectors throughout Europe and the United States. By the early twentieth century, Kuhnert’s wildlife paintings were reproduced in natural history books, advertisements, school publications, and scientific texts; his work shaping a popular understanding of the wildlife, landscape, and culture of Africa. More recently, Kuhnert’s powerful imagery and its cultural influence was at the center of the Schirn Kunsthalle’s Frankfurt exhibition King of the Animals, Wilhelm Kuhnert and the Image of Africa (October 2018-January 2019) which brought new insight into this fascinating artist and his subject.