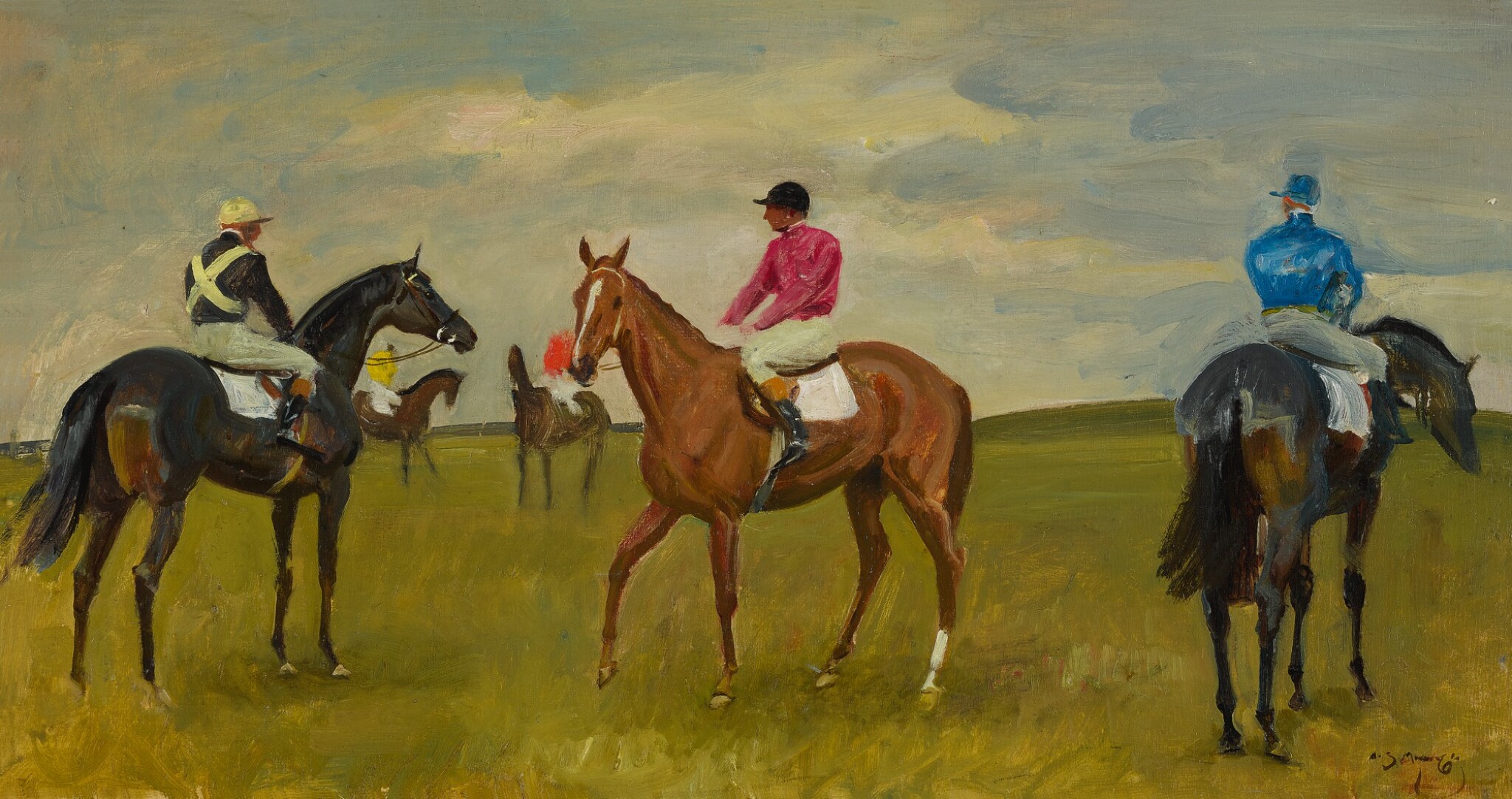 FIVE RACEHORSES WITH JOCKEYS UP

We would like to thank Lorian Peralta-Ramos, author of the forthcoming Tradition and Modernity: The Works of Sir Alfred Munnings, for confirming the authenticity of this work.

This work is in beautiful condition. The panel on which it is painted is flat and stable. The paint layer is clean and varnished. There are no retouches. There is one small unrestored loss in the sky to the left of the jockey on the far left that should be addressed. The work should otherwise be hung in its current state.

Lady Violet Munnings (acquired directly from the artist, her husband)

“I am standing on the course - the most beautiful course in the world: cloudless October sky, a faint wind from the east.... I am looking at the scene, the old, old scene - a centuries old scene. Horses come up the course looking like those of years ago....Bright colors in the sun just the same as of yore.... What a sight for the artist! with the long shadows and the lights on the boots, lights on the horses.... This is the best picture I have ever seen...” (Alfred Munnings, The Finish, London, 1952, pp.216-17).

Celebrated as the most brilliant and innovative painter of horses since George Stubbs, Sir Alfred J. Munnings returned often to the spontaneity of race day. He was first struck by the colors and drama of the sport in 1899 when he attended country races at Bungay to celebrate his first two pictures being accepted to the Royal Academy. His compositions often focused on the intimacy of race day, from the energy of early morning exercising to the excitement and nervousness of saddling up and the pageantry of riding out to the start. By the Second World War, the start of a race became a principal focus of Munnings’ art, and between 1940 and 1959 he included a painting, whether a sketch or finished oil, of the subject in virtually every Royal Academy show. Munnings frequently described the different “Starts” that he witnessed in the autobiography on which he was working concurrently, and he ruefully acknowledged the frustrations he faced in getting the specific character of these always unique moments onto canvas. Photographs of Munnings in his studio from these years often show him with two or three distinctive “Starts” and the supporting studies arranged around him.

Although started as a sketch, Five Racehorses with Jockeys Up holds its own as a complete picture. Five jockeys, in variously brilliant racing silks, are framed by rolling English hills and grey-blue sky. They are presumably gathered near an unknown starting line, depicted in a moment of calm anticipation before the race begins. Despite the quickly finished nature of this study, the artist’s keen appreciation for the individuality and personality of each horse is exhibited in the direct gaze of the central chestnut and the varied movements of the other horses.

According to a pencil inscription on the reverse, the present work was a gift from the artist’s widow, Violet, to Tom Slocombe, Munnings’s groom and one of his most recognizable models.