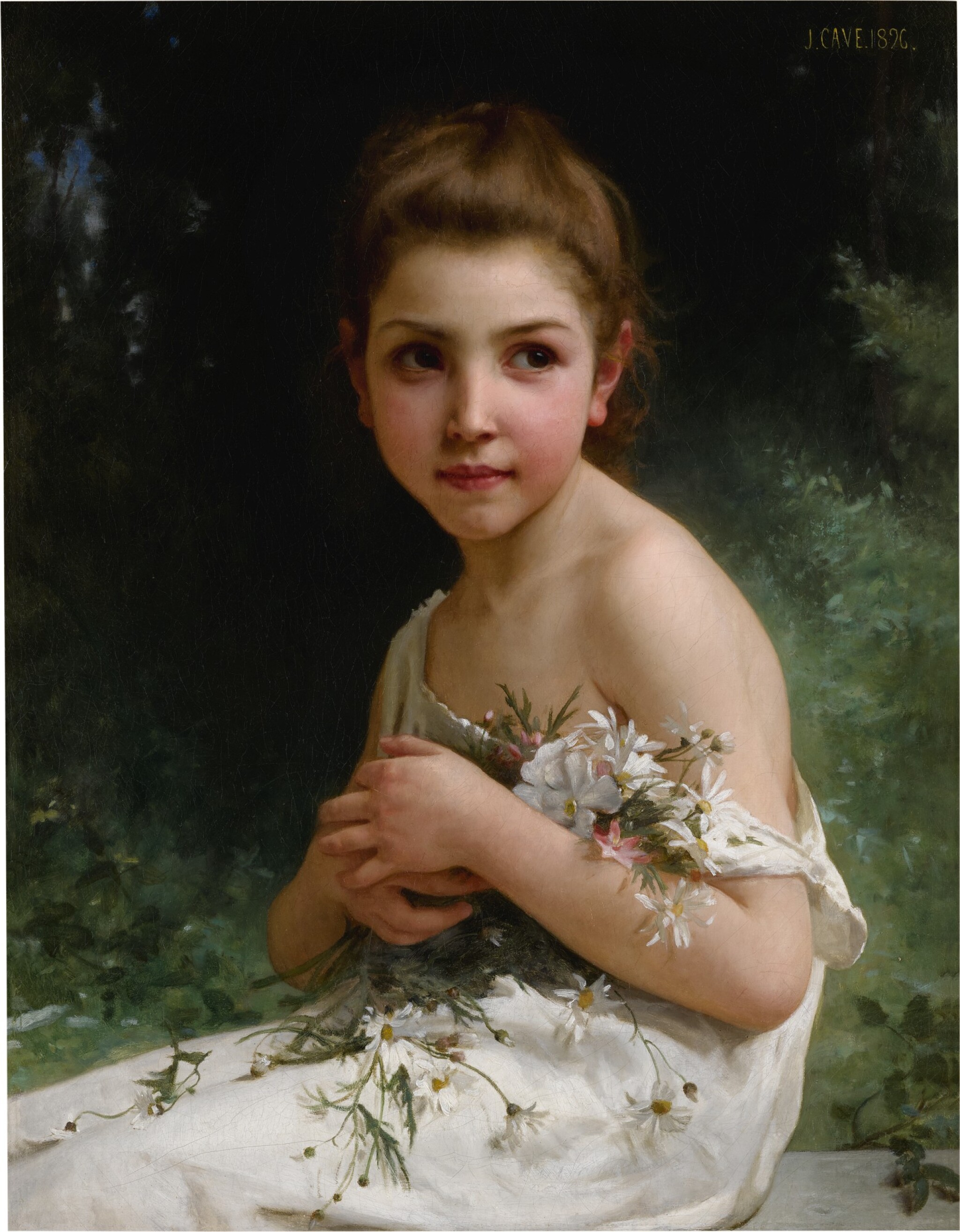 The following report has been prepared by Simon Parkes Art Restoration:

This work has been restored and should be hung in its current state. The canvas is lined with a non-wax adhesive. It is stretched on its original stretcher. The paint layer is stable. It is cleaned, varnished and retouched. The paint layer shows no abrasion or paint losses. However, as is not uncommon for this kind of picture, the paint layer has developed some cracking, particularly in the darker colors of the background. These cracks have been retouched, and these retouches are clearly visible under ultraviolet light. Within the figure, there are a few small retouches around the hands, in her left elbow, and in a few thin cracks in the shadowed side of her face. The retouches are well applied, and the work looks well as a result.

Please note there is updated cataloguing for this lot.

Mrs. A. R. Kolb (acquired at the above sale)

Probably acquired from the above, circa 1960

Collection of paintings belonging to Peter A. Schemm, Philadelphia, 1898, no. 73 (as Flowers of the Field)

For an artist as prolific and accomplished as Jules-Cyrille Cavé, remarkably little is known of his biography. Born in Paris, by 1877 he had entered the Académie Julian, joining a generation of European and American artists influenced by its teachers, most notably William Bouguereau. After leaving the Académie, it seems Cavé and Bougeureau remained close, as in the late 1880s the elder artist wrote to his daughter Henriette of attending a dinner in celebration of Cavé’s wedding (Damien Bartoli and Frederic C. Ross, William Bouguereau, His Life and Work, New York, 2014, p. 316). Though the artist won several medals at the Salon exhibiting religious and allegorical works in the Academic tradition, the hallmark of his production are compositions exemplified by Wildflowers. Unmistakably, Cavé’s paintings of models in sylvan settings holding just-picked flowers maintained a strong association in style, subject, and sensibility to the celebrated works of his teacher. As with Bouguereau’s iconic paintings of the children of La Rochelle, there is a timelessness to Cavé's compositions; the smooth brushwork erases the presence of the painter and creates a balance between immobile, static form and rich surface details, textures, and color. At the same time the artist carefully models his figures (many recognizable from one composition to the next), detailing the rough-hewn cloth of their costume and their sun-kissed skin. As such, Cavé’s work celebrates the real and the idealized, connected yet apart from the daily life of the nineteenth century. A view of gathering blooms in pristine settings erases the demands of modern society, yet the carefully constructed canvas demonstrates that Cavé saw his work not as a flights of fancy but as a world he hoped to see: one made all the more possible by the great success such compositions brought him in the art marketplace. Through the early twentieth century, Cavé’s work was collected well beyond his native France, and paintings could be found in collections through Europe, South America, and in prominent American collections.

One of the early owners of the present work was Peter A. Schemm of the Peter Schemm & Son Brewery, a distinguished art collector from Philadelphia. Mr. Schemm, like many collectors of America’s gilded age, sought out the most celebrated European artists of the time and his collection included names such as William Bouguereau, Jules Breton and John William Godward. A visitor to his collection noted, “[Mr. Schemm] has confined his selection to what is living and vital, including a showing of the work of rising men which will doubtless appreciate in importance as time goes on” (“A Gallery of Modern Art," The Booklovers Magazine, Philadelphia, 1903, p. 256). He housed his gallery in his private apartments and covered his walls floor to ceiling with his impressive collection.

Most recently, Wildflowers was part of the collection of Mr. and Mrs. Daniel M. Tabas. Daniel M. Tabas was a tenacious Philadelphia businessman who embodied the rags-to-riches story of the American dream. Born in Atlantic City, New Jersey, Daniel and his brother moved to Philadelphia with their Russian immigrant father shortly after his mother’s untimely death. He studied at Bucknell College for two years before enlisting in the Air Corps during World War II, serving until 1945, when he finished his education in civil engineering. After college, alongside his father and brother, he collected junk and scrap metal and began producing prefabricated steel structures used in construction. This project evolved into Acorn Iron & Supply Co., and would lead to many other successful ventures including banks, hotels and real estate development.

Mr. Tabas and his wife Evelyn were generous philanthropists, and a number of buildings carry the family name, including the Daniel and Evelyn Tabas Pavilion at the Wills Eye Hospital and two communities for low-income senior citizens, the Daniel and Evelyn Tabas House and the Samuel Tabas House. The Daniel M. Tabas Family Foundation continues their vision and supports charities that focus on humanitarian, scientific or educational causes that aim to benefit mankind. More specifically, distributions from the Foundation are used to combat poverty, for the care of the aged and those that are ill, and for the encouragement of science, literature and art.

Beyond their philanthropic achievements, Mr. and Mrs. Tabas had a passion for collecting. They took great pride in filling their home with an eclectic array of treasures found on their travels around the world.