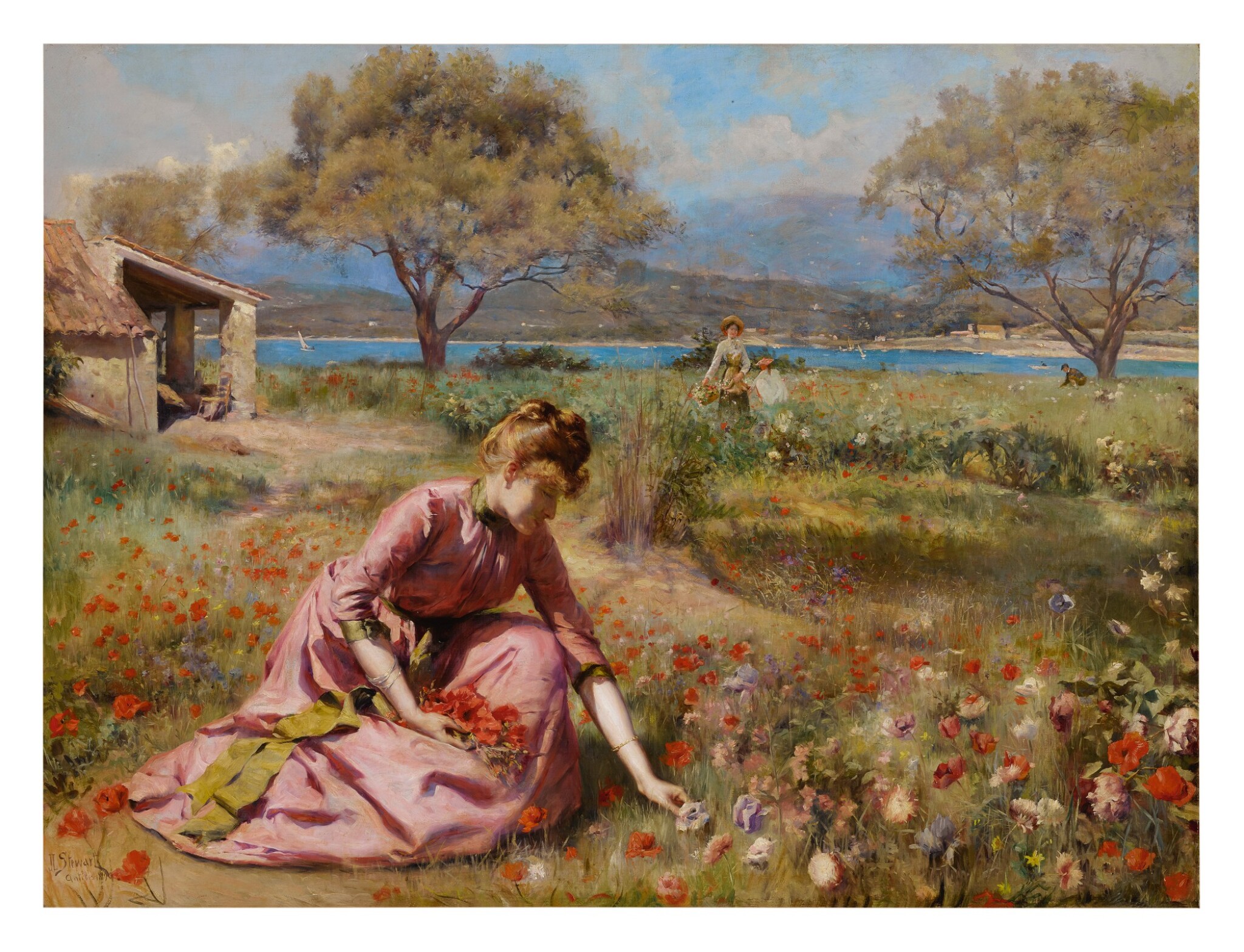 The following condition report was kindly provided by Simon Parkes Art Conservation, Inc.: This work has an old lining applied with a non-wax adhesive. The paint layer is stable and there is still a good texture to the impasto. The work is clean. No retouches are apparent in any of the figures. There are also no retouches in the landscape, except for a very small area about 14 inches to the right of the kneeling figure in the foreground. Retouches are visible under ultraviolet light to some losses on the top edge of the upper left corner, in the corner itself and along the left edge into the roof of the cottage. The condition is extremely good overall, and the work should be hung as is.

In the 1880s, Julius Leblanc Stewart’s international celebrity grew as his Salon submissions, from Five O’Clock Tea (sold in these rooms, May 22, 2019, lot 35) of 1884, to The Hunt Ball (formerly Essex Club, Newark) of 1885, to Full Speed (sold in these rooms, November 13, 2018, lot 148) of 1886, received critical and popular acclaim for their vibrant depictions of the daily life of his fellow wealthy, fashionable Americans and Parisians of his adopted city. Concluding this successful decade, the artist was invited to exhibit The Hunt Supper (Buffalo Club, New York) and five other compositions at the 1889 Exposition Universelle—paintings which proved Stewart was, as a critic believed, a “true historian” of contemporary society who “does not paint from models who are ill at ease in swallow tail coats and ball dresses… but with infinite patience and trouble from the ‘swells’ themselves” (“Artists at Home, Messrs. Reinhart and Jules Stewart in the Studios,” New York Herald (Paris), November 3, 1888, p. 2, as quoted in Hiesinger, p. 46).

His reputation secured, in 1890 the artist planned a new series of major canvases representing the Four Seasons. The new project was somewhat autobiographical and inspired by Stewart’s own social standing; according to a widely reprinted article, “the American Artist, leads a happy life abroad…. [Spending his] spring on the Riviera, his summer cruising in his yacht, autumn in his chateau in Normandy, and winter in Paris" (“Personal,” The Times, Philadelphia, December 22, 1890, p. 4). As described by a visitor to the artist’s studio, each location of these social seasons seemed to match canvases the artist had in progress or soon planned with "'The First Spring,'… the result of his work at Antibes [the resort town between Cannes and Nice] …. It is a charming bit of natural coloring. A girl is picking poppies in the foreground…. In the background a bend of the sea is very dexterously worked in, while the veiled blue of the Riviera sky on a hot day has a very happy effect” ("Our Artists at Home,” New York Herald, November 30, 1890, p. 2, as quoted in Hiesinger, p. 125). Save for this vivid description, Spring has long been untraced and with no known illustrative record. While the journalist describes aspects of the composition that vary from those in the present work (likely because it was in progress when viewed), the overall similarities suggest it is almost certainly the same. Moreover, the sensitively captured field and elegant figure picking poppies reveal the artist’s familiarity with leisurely days spent among friends. The loose, expressive brushwork suggests that he set his easel in the Côte d’Azur’s sun-filled fields, a testament to his preference “to paint out-o-doors to within the studio” (“Our Artists at Home," p. 2 as quoted in Hiesinger p. 125). The present work is also similar in size and subject to the only located work of the series, Summer, which depicts a cruise aboard the yacht of Stewart’s patron and friend, newspaper publisher James Gordon Bennett. In addition to Spring and Summer, Stewart’s visitor also observed the in-progress Autumn, depicting a group of hunters and an elegant lady arranging flowers on a verandah overlooking a valley, and mentioned Winter was planned to be a ball with decorations of seasonal flowers (“Our Artists at Home,” p. 2 as quoted in Hiesinger p. 125).

Summer was exhibited at the World’s Columbian Exposition in Chicago in 1893 under its more descriptive title, On the Yacht Namouna, In Venetian Waters (Fig. 1). Today the painting is held in the collection of The Wadsworth Atheneum Museum of Art under that same title. The remaining three seasons have been untraced since the 1890s, leaving Stewart’s full plan for his Four Seasons an elusive mystery. The emergence today of The First Spring offers an exciting new opportunity to consider the production of an artist remembered as one “who loves mankind and appreciates the civilization of the nineteenth century,” and whose “brush has always been… ever happiest of touch when treating one of those subjects which form the joyous sides of life, and of that which appertains to the social stream wherein… [he] is so highly appreciated" (“Our Artists at Home,” p. 2 as quoted in Hiesinger p. 125).