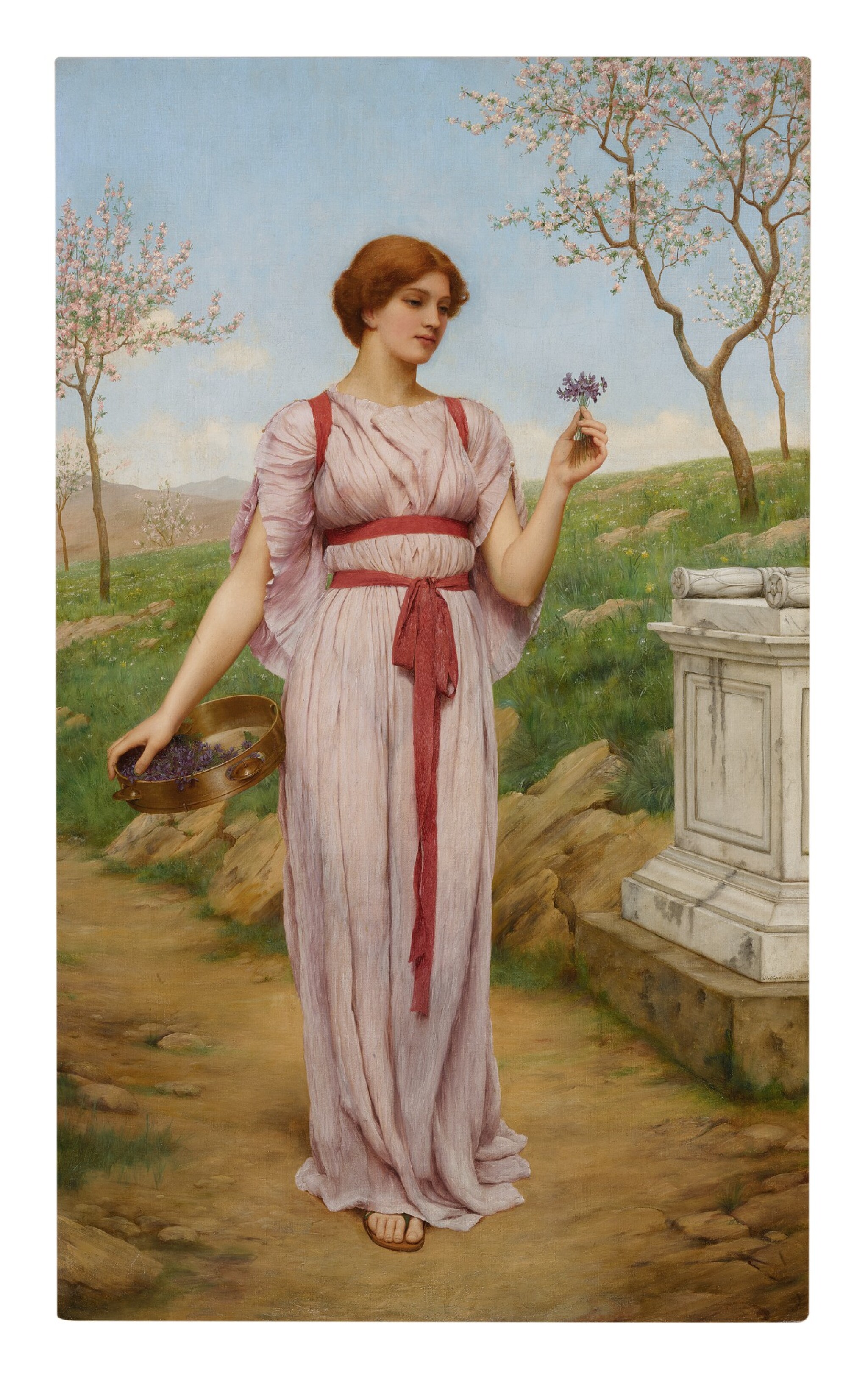 The following condition report was kindly provided by Simon Parkes Art Conservation, Inc.: This work is in very good state. It is unlined and on its original stretcher. There is one small reinforcement on the reverse corresponding to a loss and restoration in the far corner of the base of the plinth on the right. There are some retouches in the neck addressing some thinness. There is a scratch in the sky above the posy on the right side, and some pentimenti around the head have been reduced with retouching. There are a few spots of retouching in the sky on the left side. There is a retouching in the distant hills on the left. The condition is good overall. The retouches are generally accurate, and the work should be hung as is.

Acquired from the above in 2004

In The Posy, John William Godward presents a departure from his iconic Neoclassical scenes. Instead of cloistered on a marble terrace or in a Pompeiian villa, his contemplative model roams the countryside, collecting wildflowers in her tambourine. Godward’s extraordinary technical mastery is evident in the handling of the young woman’s diaphanous pink coa vestis stola (the female variation of the ancient Roman toga), and classically inspired flame red palla (Roman shawl). The artist sensually contrasts these vivid gossamer fabrics with the flowering trees and open path, overlooking a distant Mediterranean vista. Like other artists of the Victorian period such as Frederic Lord Leighton, Sir Lawrence Alma-Tadema, and Albert Moore, among others, Godward’s allegiance to Antique themes remained consistent throughout his career and became synonymous with an art of great aesthetic beauty and harmony.

In Godward’s prolific oeuvre, he exquisitely renders scenes of idle contemplation and idyllic beauty, in which life is devoted to the daily pursuit of pleasure. His works were initially admired by the prominent art dealer, Arthur Tooth, who purchased ten of the artist’s early oils, but Godward’s greatest champion was his longstanding art dealer Thomas McLean. Godward was a productive and consistent artist, producing on average fifteen to twenty high quality paintings a year, and his income was supplemented by engraved reproductions of his images, making him popular with the middle-class Victorian market. Godward lived and worked in various artist studios throughout London, including Bolton Studios, a hive for classical artists, and the quiet, reclusive No. 410 Fulham Road. He filled his studios with marbles, ancient statues, and antique objects to create a Greco-Roman environment and bring his imaginary world to life.

In 1887, Godward secured his entry into the Royal Academy and continued to exhibit there until 1905, when he moved to Italy. Dated 1900, The Posy was painted while Godward was living in London, although in spirit it is entirely Italianate. A painting titled “The Posy” and dated 1900 which was sold by Thomas McLean has long been unlocated, and the present work was known only through a poor photograph. Recently, upon first-hand inspection, Vern G. Swanson has confirmed the attribution to the artist and it will be fully included in his forthcoming revision to the artist’s catalogue raisonné.