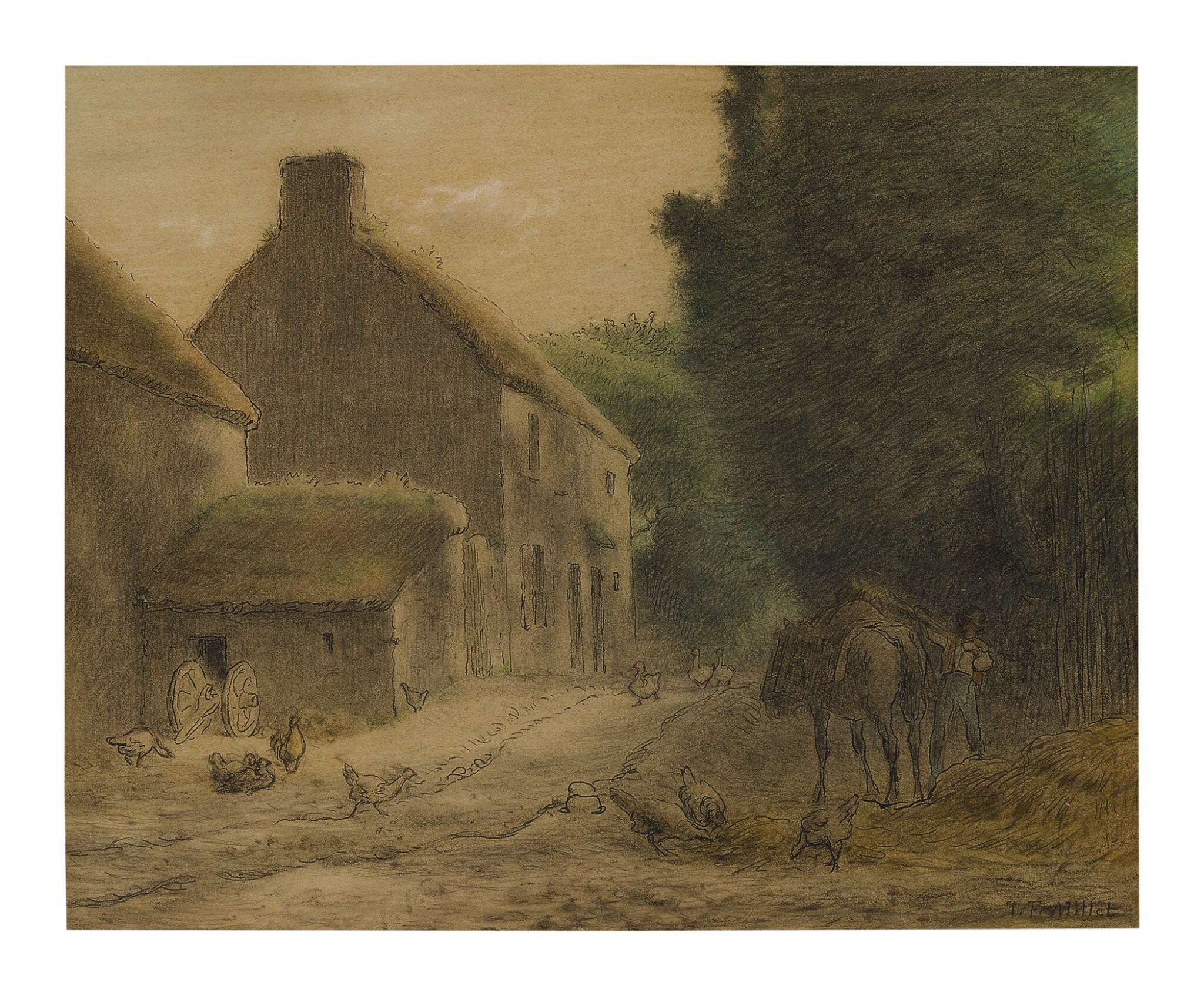 pastel, crayon noir, stumping and pen and ink on paper

We would like to thank Alexandra Murphy for kindly confirming the authenticity of this lot and providing this catalogue entry.

Pastel, crayon noir, stumping and pen and ink on thick paper. The sheet is adhered to a pressed board along the left edge, though the other edges are not adhered. The sheet appears to be in generally good condition aside from some minor surface dirt from handling at the extreme edges, as well as tape and tape residue at the extreme edges.

Farm House at Gruchy is one of a group of works depicting Millet's native village in coastal Normandy that he drew in the early 1860s as he began to experiment in earnest with new balances of line and color for his finished drawings. Based on sketches of the various sites that he had recorded while visiting Gruchy several years earlier, Farm House at Gruchy and three related drawings were worked up at Millet's leisure back in Barbizon and signal his serious turn toward landscape drawing and the medium of pastel.

Millet had been making finished figure drawings throughout the 1850s, occasionally filling out his black crayon designs with faint touches of colored crayon or pastel. Perhaps as a diversion from an onerous paintings contract, or perhaps in response to concurrent experiments by his close friend and Barbizon colleague, the landscape painter Théodore Rousseau, Millet began working up landscape drawings around 1860-63. Employing a frequently changing balance of media that included pencil, black and colored crayons, pen and ink, watercolor, and ultimately pastels, Millet tried out a range of effects that would allow him to capture the half-light of early evening which he particularly loved, without sacrificing the definition and quirkiness of the drawn line.

Farm House at Gruchy depicts an unidentified home and out-buildings along the dusty roadway that defined the small hamlet of Gruchy in Millet's day. It may well be the next house beyond the Millet family's own holdings, with the road leading on to the neighboring enclave of Cousin. Other drawings in the group, belonging to the Museum of Fine Arts, Boston, depict Millet's own birthplace, the Millet family barn and well, and a nearby manor house. An unfinished painting of Farm House at Gruchy, mistakenly titled Maisons à Barbizon is unlocated.