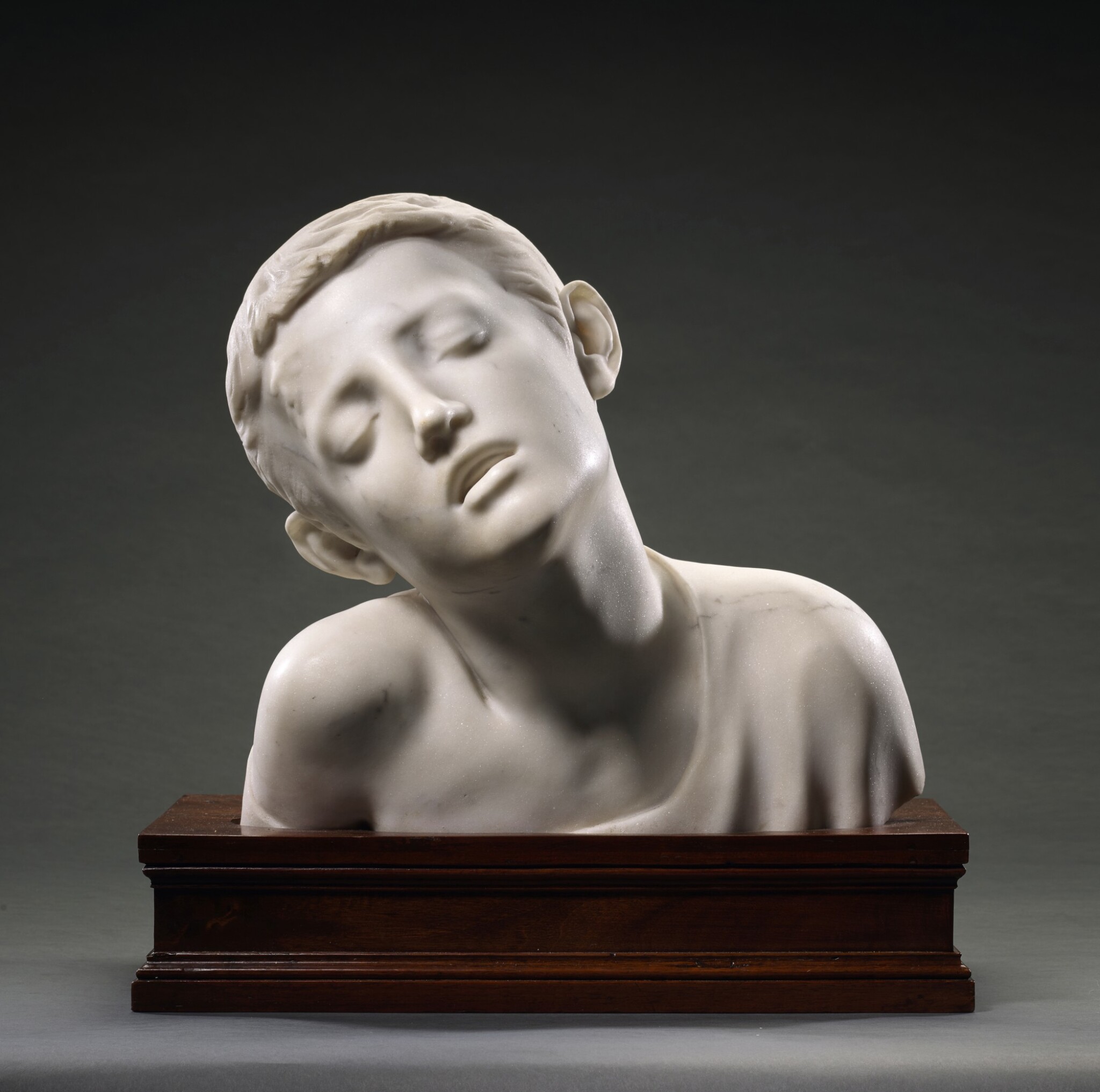 white marble, on a wood base

Overall the condition of the marble is excellent with minor dirt and wear to the surface consistent with age. The original surface is well preserved. There is a slightly yellow patina to the marble which may indicate that it has been in a smokey room for a period of time. There is natural veining to the marble throughout. There are minor naturally occurring inclusions in the marble, including to the proper left cheek. There is a very slight orange mark to the end of the nose, which is possibly in the stone. A particularly beautiful piece of marble marble.

Lots marked "W" will be sent to Greenford Park Warehouse immediately after the auction.
Studio of the artist, circa 1900
Featured in a photo of the studio of the artist in the musée d'Orsay archives, Paris [erroneously recorded as from Le Monde Illustré issue n° 2381, 1902, p. 514];
A. Pingeot and L. de Margerie, Musée d'Orsay: Catalogue sommaire illustré des sculptures, Paris, 1986, p. 148 [referenced; 'Buste seule']
This beautiful marble is a rare bust version of Alexandre Falguière's celebrated Tarcisius, martyr chrétien, of which the plaster model was exhibited to great acclaim at the Paris Salon of 1867 and was subsequently shown at the Éxpositions Universelles of 1867 and 1900. The model was acquired by the French state and the original plasters are housed in the collections of the musée des Augustins, Toulouse, and the Petit Palais, Paris. The first marble version (1868) is in the musée d'Orsay, Paris (inv. no. RF 174) and the second (circa 1880) is housed in the Metropolitan Museum of Art, New York (inv. no. 2007.407).

The present bust is both important and rare. The condition is near perfect, with the bust retaining its beautifully carved and polished original surface. The emergence of the present bust of Tarcisius, martyr chrétien, location hitherto unknown, represents a significant discovery for the autograph oeuvre of one of the leading lights in French sculpture at the end of the 19th century.

Falguière's Tarcisius represents 'a curious blend of ambiguous sensuality and Christian morality, of Academic art and Realism' (R-G. Ojéda, op. cit.). The religious subject was a somewhat unusual choice for the sculptor's second major work, the first having been his Le vainqueur au combat de coq (The Victor of the Cockfight; musée d'Orsay, inv. no. RF 144). However, it was noted by the critic Edmond About that the work, which represents the 3rd-century St Tarcisius, patron saint of altar boys, 'would be reduced and reproduced in thousands of copies, and mothers would give it to their sons on the day of their first communion'. It was thus a commercial choice of subject for Falguière.

Despite the serious spiritual subject, Falguière's Tarcisius is based upon an episode from a Romantic novel, Cardinal Weisman's Fabiola, or the Church of the Catacombs, 1854 - in which the young Christian Tarcisius is stopped by a group of pagan playmates as he carries the Host along the Via Appia Antica in Rome. They demand to see what he is holding, but the pious Tarcisius refuses and is martyred through being stoned to death. In Falguière's model, the young boy lies upon the floor cradling the Host, protecting the Body of Christ from those who have attacked him. Tarcisius' expression is one of anguish as he exhales his dying breath through parted lips; by his proper right elbow the stones of martyrdom litter the ground.

The model is of course partly indebted to Stefano Maderno's Santa Cecilia in the eponymous church in Trastevere, Rome (1600). As in the baroque model, Falguière's Saint's body lays upon the ground and is clothed in flowing drapes. Falguière had in fact studied a live model for the Tarcisius, a 15 year old boy who posed nude. In the final model the sculptor presented him clothed in drapes, which adds a sense of visual purity to the composition. As Peter Fusco has noted: Falguière's emaciated and robed Tarcisius possesses a ... ascetic sensuality. The work is based on careful study of not only a live model but also photographs of the model. This is a working procedure Falguière was to employ throughout his career and one which undoubtedly contributed to the tableau vivant quality that pervades the work (op. cit., p. 255).

In the present bust format the model adopts a startling sense of modernity. The Tarcisius seems to anticipate fin de siècle symbolist and Secessionist sculptures such as Georges Minne's Le Petit Blessé (1898). It represents a beautiful and poignant representation of Christian martyrdom and childhood innocence, brutally curtailed. The superb quality of the marble is a testament to Falguière's reputation as a marble carver and recalls the full length version in the Metropolitan Museum of Art in which 'Falguière seems to have defied the marble’s hardness to create instead a semblance of immateriality' (Metropolitan Museum online catalogue, op. cit.).

The bust is recorded in a photograph in the musée d'Orsay archives (erroneously recorded as coming from Le Monde Illustré issue n° 2381, 1902, p. 514; the photograph may come from another issue of the same magazine, which is unknown to the cataloguer). Whilst it therefore appears to have been in the sculptor's studio towards the end of his life, it is not listed in the catalogue for his widow's estate sale, Georges Petit, Paris, 14-15 May 1907.