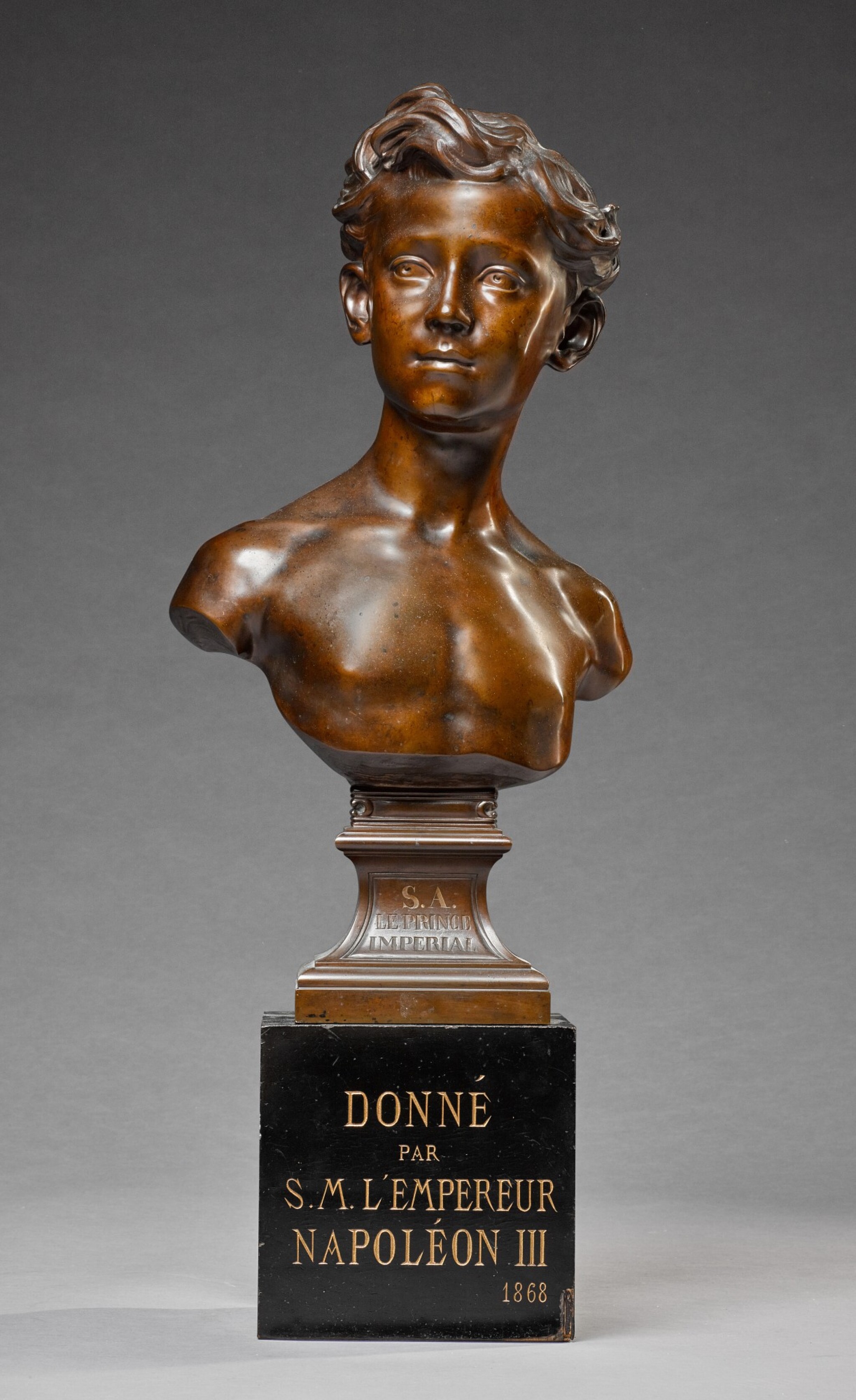 bronze, mid brown patina, on an ebonised wood base

Overall the condition of the bronze is very good with minor dirt and wear to the surface consistent with age. There is minor dark spotting to the patina consistent with age of the bronze and patination technique. Some of these very minor dark spots and marks can be found to the face and shoulders. There is a small patch of wear to the patina below the proper right tear duct and to the centre of the forehead. There are a few minor nicks and scratches including a small scratch to the proper left side of the chin. There is residue from an old sticker on the integral socle below the titular inscription. This inscription has traces of old gilding. The ebonised wood base is in good condition. There is minor stable splitting to the wood consistent with the material. There are small chips, scratches and abrasions to the edges and corners. The bronze is a high quality period cast.

Carpeaux's Prince Impérial is one of the sculptor's greatest portraits and a defining image of Second Empire France. In 1865, the Emperor Napoleon III (1808-1873) and his wife the Empress Eugénie de Montijo (1856-1879) commissioned Carpeaux privately to sculpt a portrait of their only son, Prince Louis-Eugène-Napoléon (1856-1879), then aged about eight years. Carpeaux accepted the commission having been refused the opportunity to execute a portrait of the sitter's mother, the Empress Eugénie, in 1864.

Between the April and June of 1865 Carpeaux worked on a bust portrait of the prince, together with a full figure portrait of him standing with his favourite dog, Néro. The reason for the dual commission was that the Empress wanted a bust portrait whilst the Emperor requested a full figure representation. Carpeaux had a temporary studio constructed in the Orangerie of the Jardin des Tuileries so that he could have easy access to his model. Carpeaux knew the Prince Impérial personally since he had given the boy drawing and modelling lessons the previous year, 1864. However, the sculptor also had another child model since he wished to pay particular attention to the pose and costume in the standing group. The full figure statue marks an innovation from previous royal portraits, in representing the sitter as an upper class child with his favourite pet. Carpeaux wrote: 'my statue of the Prince Imperial will be a fine symbol of the modern era for the future; I am putting all my skill and life into it; it will be a step on the ladder to fame.'

The present model adopts an altogether more classical format, presenting the prince bare breasted in a manner which recalls Roman portraiture of the late Republican period. Of the known autograph marble versions: the prime version from the collection of the Empress Eugénie is now at the musée national du château de Compiègne (inv. no. MMPO 1628); the marble commissioned for the salle du conseil of the l'Hôtel de Ville, Paris, is now in the Petit Palais (inv. no. PS 14); a third is in the collections of the Earls of Rosebery at Dalmeny House, Scotland; and a fourth was commissioned by Achille Fould (1800-1867) which may be the same as that offered at Sotheby's, Paris on 16 June 2016, lot 70. Other marble versions have surfaced.

Bronze versions were cast as early as 1865 when the right to reproduce the model was still under the authority of the Imperial administration. The present bronze is one such lifetime cast made by the founder Ferdinand Barbedienne. Bronze casts are rare on the art market and the present example is notable for the high quality of casting and its attractive original patina. Further Barbedienne casts are at the musée national du château de Compiègne (inv. no. C2143) and in the Museo Napoleonico, Rome (inv. no. MN 441).