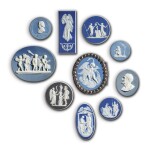 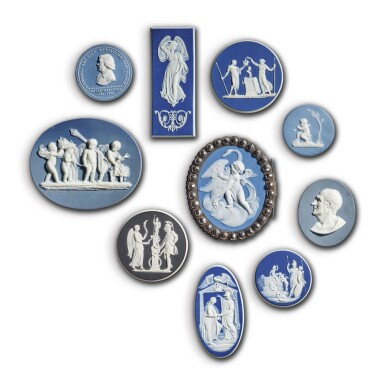 in various shapes, in solid-blue jasper, blue, and black jasper-dip in white relief with classical subjects, including a Wedgwood and Bentley oval medallion of a classical head in profile, impressed lowercase Wedgwood & Bentley, numeral 6; a Wedgwood and Bentley oval medallion of four putti, impressed uppercase WEDGWOOD & BENTLEY; a black jasper-dip circular medallion, impressed uppercase WEDGWOOD, and a circular medallion commemorating a Josiah Wedgwood exhibition at the Liverpool Art Club, February 3, 1879, and an example depicting cupid and a swan in a metal brooch mount.

Length of largest 3¼ in.