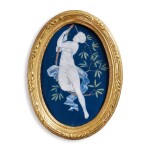 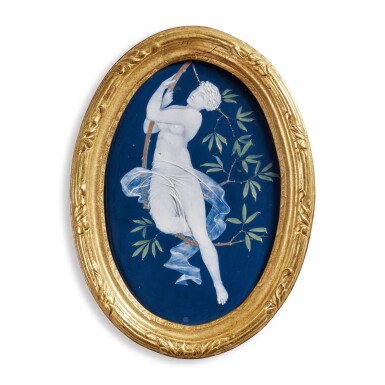 decorated by Frederick A. Rhead, in white slip depicting Ariel from Shakespeare's 'The Tempest', clasping a tree branch, the glazed white reverse incised twice with artist's monogram FAR/ J WEDGWOOD & SONS/ ETRURIA 1879., and "UNDER THE BLOSSOM THAT/ HANGS ON THE/ BOUGH ", mounted in a gilt-wood frame.

In overall good condition and appearance. There is a minute firing flaw to the front surface to the left of the figure as visible in the catalogue illustration.

Josiah Wedgwood & Sons appear not to have attempted the production of pâte-sur-pâte until the artist Frederick Rhead joined the manufactory in 1878. He had been a pupil of Louis Solon at Minton until he was dismissed in December 1877, reputedly for stealing a small quantity of clay. In the year he began employment his work was selected by Wedgwood for the Paris Exposition Universelle. Two pairs of vases were included, which prompted one journal reporter to write "These examples... shows [sic] the valuable addition Messrs. Wedgwood's staff has gained by the advent of Mr. F. Rhead", Pottery and Glass Trades Journal, May 1878, 74, referenced in Bernard Bumpus, Pâte-sur-Pâte, The Art of Ceramic Relief Decoration, 1849-1992, London, 1992, p. 154. Rhead worked at Wedgwood for less than three years.

The quote incised on the reverse is taken from the song 'Where the bee sucks, there suck I', from Shakespeare's The Tempest, sung by Ariel in Act V, Scene I. The character Ariel is widely viewed as male, though beginning in the Restoration the role began to be played by women, which may explain Rhead's choice of a maiden.