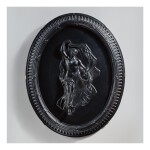 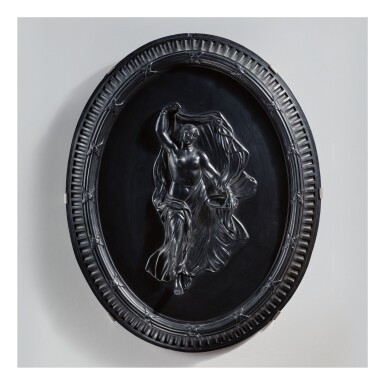 from the 'Herculaneum Figures' series, the figure in relief wearing a diaphanous costume holding a tray, within a ribbed integral frame.

The image is taken from a fresco painting of a Dancing Maenad, found in the triclinium (dining room) of the Villa of Cicero, which was located on the Herculaneum road outside Pompeii at the Herculaneum Gate of the City. The Villa was discovered by archeologists in 1748/49 and again in 1763, under the direction of the Accademia Ercolanese, established by Charles III of Spain, King of Naples, specifically to produce scientific accounts of the monuments that were coming to light. The original image is one of seven fragments which show figures in flowing drapery, some playing instruments. The fragments were removed from the Villa in 1763 and are preserved in the Naples Archaeological Museum, inv. no. 9297. See Carol Macht, Classical Wedgwood Designs, The Sources and Their use and the Relationship of Wedgwood Jasper Ware to the Classical Revival of the Eighteenth Century, New York, 1957, pp. 74-80 for further plaques showing figures from this series. A second black basalt plaque of this size showing the same figure is in the Victoria and Albert Museum, London, mus. no. 2409-1901, illustrated in Captain M. H. Grant, The Markers of Black Basaltes, London, 1967, pl. LI, no. 2.

The figures from this series are illustrated in the first volume of Le Antichita di Ercolano Esposte, published between 1757 and 1792. The series was modeled directly from a set of bas-reliefs brought to England by the Marquis of Lansdowne, and are first listed in Wedgwood and Bentley's 1773 catalogue. They seem to have been in production by 1771 as Wedgwood wrote to Bentley that year "finishing some frames for the Herculaneum, & other Basreliefs" (quoted from Robin Reilly, Wedgwood, London, Vol. I, p. 484).