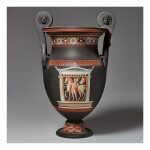 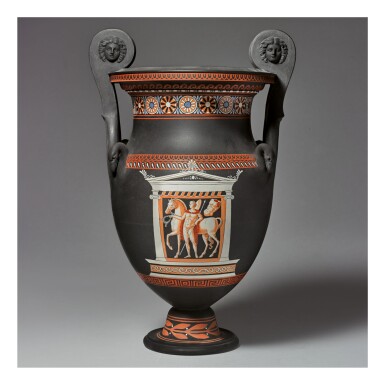 after the so-called 'Hamilton Vase', shape no. 128, the shoulder affixed with two handles bearing Gorgon masks on either side terminating in two loops with swans heads, painted in terracotta-red, orange, blue and white, the front with a male youth standing within a heroon, the reverse with a large anthemion in shaded red and blue, within Greek Key and egg and dart bands, the flared rim with bands of egg and dart, waves, and rosettes, impressed uppercase WEDGWOOD.

The vase is in good appearance. To the upper edge rim at the reverse there is a flat restored chip measuring approximately 1.5 cm wide x 0.8 cm. Around this area there is a patch of spray or over-paint to the black basalt top-edge

The present vase copies of a 4th-century BC Apulian (south Italian) vase from the collection of Sir William Hamilton (1730-1803). Wedgwood copied the engraving from The Collection of Etruscan, Greek and Roman Antiquities from the Cabinet of the Honble Wm Hamilton, P. F. d'Hancarville (ed.), Naples 1766, Vol. I, pl. 52, rather than study the Antique vase in the British Museum. The vase features the same mistake as in the engraving, the Vitruvian wave around the underside of the rim goes from left to right, where as the band on the antique goes from right to left.

Wedgwood copies are recorded with varying levels of painted decoration. Examples which copy the antique most closely include those in the Collections of the Victoria and Albert Museum, London, mus. no. 2419-1901; and the Philadelphia Museum of Art, acc. no. 1992-40-1. Another variation without the female bust and foliate scrollwork at the rim was exhibited at the Sixth Wedgwood International seminar, De Young Museum, San Francisco, April 20-22, 1961, illustrated in the accompanying catalogue, 1961, pp. 30-31, no. 70, alongside an antique vase of the type. And like the present example with sole focus on the heroon motif, a near identical example, only differing in the leaf band around the foot, is illustrated in Robin Reilly, Wedgwood, Vol. I, London, 1989, p. 423, pls. 601-601A.