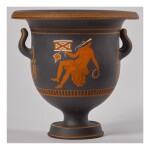 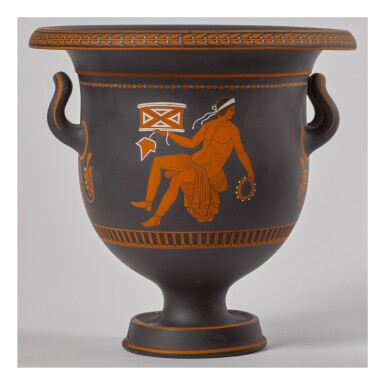 painted in terracotta-red and white with the figure of a musician holding a drum and tambour, within classical ornament bands, the base of the two loop hands with painted anthemion, impressed uppercase WEDGWOOD.

The foot restored. The rim with areas of over-paint which are flaking revealing an area of replacement material approximately 3 3/4 in. of the circumference. The main body of the vase is in good appearance.

The figure appears on the reverse of the krater vase, now referred to as the 'Hamilton vase', in the British Museum, London, mus. no. 1772,0320.14.+., the design of which is reproduced in the double color plate 55, from Volume I of The Collection of Etruscan, Greek and Roman Antiquities from the Cabinet of the Honble Wm Hamilton, Naples,1766. See plates 75 and 76 in the same volume for black and white plate engravings of another vase of the present form and a design cross-section with measurements.