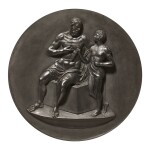 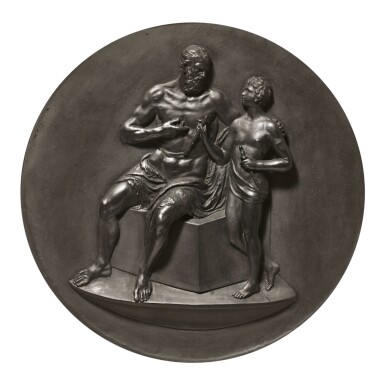 Please note: the plaque has not been examined for condition out of its frame. The visible body is in good condition.

From the 'Herculaneum Figures' series, the model is taken from a cast obtained from Mary Landré and was first listed as No. 61 in Wedgwood and Bentley's 1773 catalogue though according to the literature it was in production by June 1769. A blue jasper dip example is in Dwight and Lucille Beeson Collection in the Birmingham Museum, Alabama, illustrated in Robin Reilly, Wedgwood, The New Illustrated Dictionary, Woodbridge, Suffolk, 1995, p. 275. Reilly, ibid., p. 254, records subjects listed on Landré's invoices which are identifiable in the Wedgwood & Bentley catalogue.