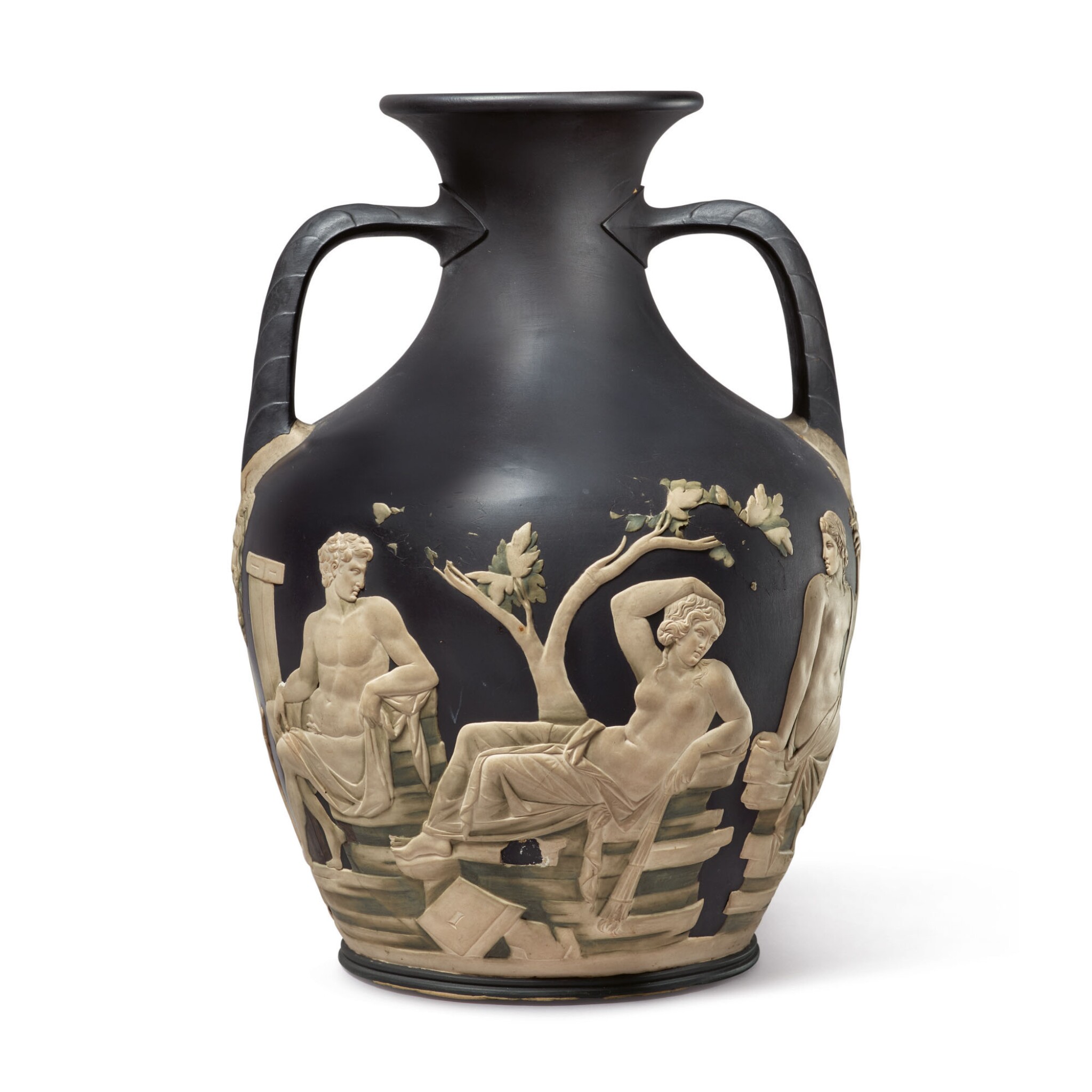 after the antique, of amphora form, with two molded scaled handles affixed at the shoulder with a flaring trumpet neck, applied in white relief with a continuous scene around the body with six classical figures and a cupid and on the underside with a roundel of Pan, embellished in tones of green-blue and brown. Together with a ticket inscribed Admission/to see Mr. Wedgwood's Copy of/ THE PORTLAND VASE/ Greek Street, Soho/ between 12 o' Clock and 5. 2 pieces.

The decoration has peeled away during firing, located at the lower left part of the left of the standing figure in the Alternate view catalog image. The body of the vase is intact.

Collection of the Chrysler Museum, Norfolk, bearing acc. no. 71.989, de-accessioned

The original cameo-glass vase, thought to date to the reign of Roman Emperor Augustus Caesar (27 B.C. - A.D. 14) is in the collection of the British Museum, London, mus. not 1945,0927.1. It is first recorded in 1600-01 when it was in the possession of Cardinal Francesco Maria del Monte. Following his death it passed into the hands Antonio Barberini, nephew of Pope Urban VIII.

It is to this illustrious Roman family that the antique glass owes its first name, 'The Barberini Vase'. It remained in possession of the Barberini family until about 1780 when Donna Cordelia Barberini-Colonna sold it to the Scottish antiquary James Bryes, who in turn sold it to Sir William Hamilton. The exact date that Hamilton acquired the vase is uncertain, though he carried it with him on his return to London in August 1783. Hamilton then sold the vase to Dorothy Bentinck, Duchess of Portland (1750-1794). Horace Walpole had described the duchess as "a simple woman, but perfectly sober, and intoxicated only by empty vases". She was, therefore, the ideal person to be offered such a prize. (Wal. Con., xxxiii, p. 489, letter addressed to Lady Ossory, 19 August 1785). It entered her personal museum in the Privy-Gardens, Whitehall.

In February 1784 the sculptor John Flaxman Jr. wrote to Wedgwood of the vase: "'I wish you may soon come to town to see Wm. Hamilton's vase, it is the finest production of Art that has been brought to England and seems the very apex of perfection to which you are endeavoring to bring your bisque and jasper.'" (quoted in Dawson, 1984, p. 115). After the Duchess's death the vase was sold to a third party, and around this time in 1786 Josiah first lends the vase for trials.

It seems Wedgwood did not produce a copy he was satisfied with until 1789. The following year he hosted private views of a copy in his Soho showroom. Wedgwood then showed it to a wider public audience in his showroom, however it was still restricted to those who could procure a ticket. According to Young, Hilary, The Henius of Wedgwood, London, England, 1995, 1900 tickets were printed.

Exactly how many Portland vases were made in this first edition is unclear and has been much debated. The Wedgwood 'oven books', or record of kiln firings which may be incomplete documents forty-five copies, Aileen Dawson, Masterpieces of Wedgwood in the Btritish Museum, London, 1984, op.cit., p. 124. Some of the first editions are numbered and the highest number recorded so far is '30' on the example in the collection of the Art Institute in Chicago. 'Number 3' or 'The Barker Copy', was sold at Sotheby's London, October 22, 1974, lot 182, and 'Number 22' from the Oster Collection was sold in the same rooms, November 30, 1977, lot 112. The most comprehensive listing of early numbered and unnumbered 'first edition' vases is compiled Ann Eatwell and Aileen Dawson and is published in Dawson, op. cit., pp. 149-150, where the present vase is included with nineteen other unnumbered examples.