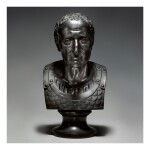 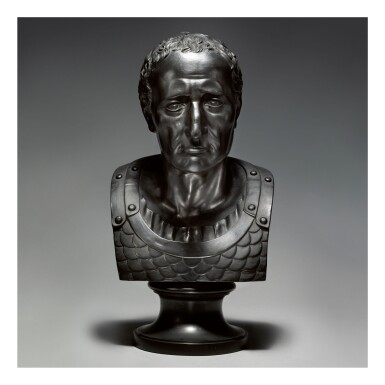 The bust is in overall good appearance.

Wedgwood wrote to Bentley in February 1771: "I wrote to you in my last concerning of Busts. I suppose those at the [Royal] Academy are less hackney'd & better in General than the Plaister shop can furnish us with; besides it will sound better to say - This is from the Academy, taken from an Original... than to say, we had it from Flaxman."

though he concluded that "we must be content to have them [the moulds] as we can, & as Oliver, as a plaister figure maker, in selling his moulds, transfers his business likewise to us he must be pd. handsomely for them.", Reilly, 1989, Vol. I, p. 450. It was apparent to Wedgwood that he could create more durable, and beautiful models than anything produced in plaster. By 1774 Josiah proclaimed he would have "a collection of the finest Heads in the Word". (Reilly, ibid, p. 456.)

According to Robin Reilly and George Savage, The Dictionary of Wedgwood, 1980, p. 67, this bust of Caius Julius Caesar was "supplied by Hoskins & Grant [to Wedgwood in] 1779, [and] not listed in the Catalogues after that date."