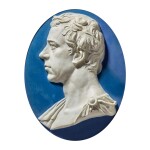 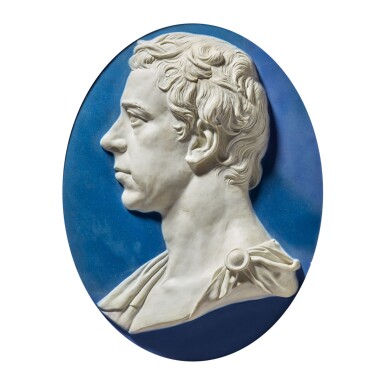 There are areas of restoration to the flat blue area of the plaque behind his head and below the shoulder - it is impossible to see the extent of the damage this covers. There is a minor, probably firing related fine haircrack running across his chest. Not inspected out of frame, however the back of the plaque is visible.

A bill from John Flaxman for 'The Portrait of Mr. Banks modelled in Clay...2.2.O' is dated 21 August 1779 and it is thought this is probably is the portrait referred to by Josiah Wedgwood in a letter dated September 1779. Wedgwood says of the profile, '...as a good head, & a very strong likeness, but the original does not seem to have sat in an over pleasant mood.' See Robin Reilly and George Savage, Wedgwood, The Portrait Medallions, London, 1973, p.56 where a second example of Banks in this profile is in the British Museum, London, acc. no. 1887,0307,I.60.

Banks was a naturalist and President of the Royal Society from 1778. He received a prolonged correspondence from Sir William Hamilton on all matters of scientific interest relating to the Bay of Naples, and especially the activities of Mount Vesuvius. This plaque was made as one of the series of large portrait plaques of 'eminent moderns', which included: Hamilton; Robert Boyle (1627-91), the natural philosopher and chemist; Daniel Charles Solander (1736-82), the Swedish naturalist; Benjamin Franklin (1706-90), the American statesman; and Isaac Newton (1642-1727), natural philosopher and mathematician (this last was to form a pair with that of Dr Joseph Priestley (1733-1804). Banks, along with Solander were on Cook's first circumnavigation of the World.