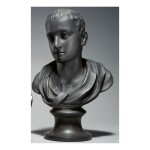 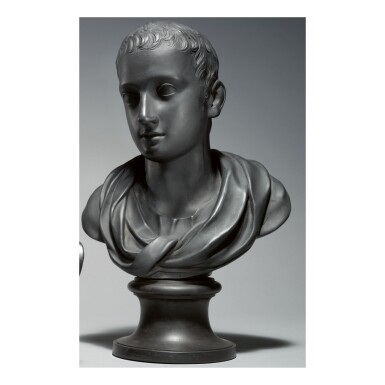 with classical drapery around the shoulders, mounted on a waisted circular socle, the reverse of the bust impressed HORACE, lowercase Wedgwood & Bentley, incised marks, the underside of the socle impressed uppercase WEDGWOOD AND BENTLEY.

The bust has been re-bolted to its socle and doesn't quite sit flush to it. Otherwise, generally good condition.

Gallagher, op. cit., writes that Horace was one of the first bust models produced by Wedgwood & Bentley. Along with Cicero and George II, it is one of only three listed in the partners' first trade catalogue in 1773. The plaster cast for the present model in 1770 was supplied by plaster makers James Hoskins and Samuel Oliver. Gallagher further writes that the ultimate source is the Roman 17th century red porphyry bust in the collection of the Earls of Pembroke, Wilton House, most recently catalogued by Elliot Davies and Emanuela Tarizzo, The Wilton House, Horace the Poet of Porphyry & Cicero of Touchstone, Tomasso Brothers, London, 2018.