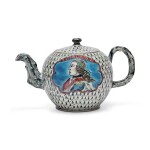 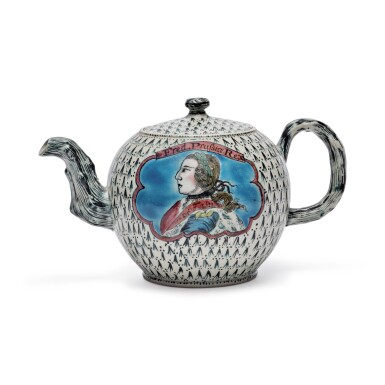 of globular form, affixed with a crabstock handle and spout, one side painted with a profile portrait of Frederick II wearing a laurel wreath in his hair and an ermine-trimmed robe, titled Fred. Prussiæ Rex, the reverse side with a crowned Prussian eagle bearing a wreathed pink-ground shield-with-sceptre and banderole inscribed Semper Sublimis, all reserved on a black and white ‘ermine' ground.

Extensively restored. With the exception of the base, handle and flange, the entire interior and exterior body of the teapot has been oversprayed with occasional minor overpainting in areas, making a determination of the exact nature of the original damage impossible. The tip of the spout is restored and there overspray around the lower portion where the spout joins the body. Some minor small chips to the flange of the pot. There is restoration to the rim of the cover and its entire exterior has been oversprayed.

The decoration on this teapot commemorates England’s support of Frederick II, ‘The Great’, King of Prussia and great-nephew of King George I of England, in his efforts in the Seven Years’ War (1756-63). His eventual victory established the power of Prussia in Europe and led to the unification of the smaller German states against Austria.

Teapots with this decoration were made in many sizes and with a variety of handles, spouts and knops, but a similar example is illustrated in Ross E. Taggart, The Frank P. and Harriet C. Burnap Collection of English Pottery, 1967, p. 80, no. 242. An example was in the Harriet Carlton Goldweitz Collection, sold in these rooms, January 20, 2006, lot 126. Two other examples, one with the portrait molded in relief and both with crabstock knops, from the Collection of Bernard and Judith Newman, were sold in these rooms, January 21, 2005, lots 299 and 200.