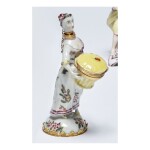 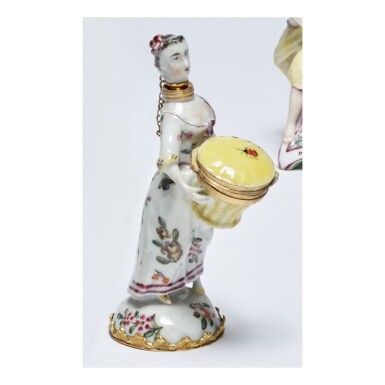 modeled as a female figure painted with flower sprigs, holding a basket with hinged cover, her head forming the chained detachable cover.

In overall good appearance. The patch box, and both her arms have been restored, and there is associated spray to the areas of the rest of the figure. It is difficult to determine extent of damage due to spray.

Another example of this rare model in the Irwin Untermyer Collection is illustrated by Yvonne Hackenbroch, Chelsea and Other English Porcelain, 1957, pl. 67, fig. 174; a second was sold at Sotheby's London, December 14, 1972, lot 104. A variation of the model was produced in which the basket the figure holds is filled with flowers rather than functioning as a patch box; such an example was in the collection of Mrs. Meyer Sassoon, sold, Sotheby's London, October 12, 1965, lot 40.