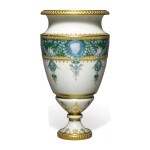 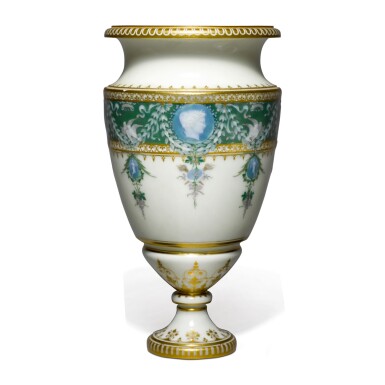 In good appearance. There is a small shallow chip to the shoulder edge, measuring approximately 0.6 x 0.2 cm at widest points.

In Reports on the Paris universal exposition published for the Illustrated London News, 1867, p. 408, Mr Leon Arnoux, comments: "..the principal feature in the Sèvres court is the great number of vases in that hard porcelain called pâte sur pâte. For the last 15 years the manufactory has chiefly directed its exertions on its production, and, thanks to Mr. Gely, they have been crowned with perfect success." Bernard Bumpus, in Pâte-sur-Pâte, The Art of Ceramic Relief Decoration, 1849-1992, 1992, cites Marc Louis Solon's complimentary remarks on Gèly on p. 21: 'Gifted with an extraordinary skill of hand, he could chisel the porcelain paste with a surety and neatness of touch usually reserved to the treatment of precious metals..." Bumpus further notes that Gèly was awarded a second class medal for his work at the Paris Universal Exhibition in 1855, where he was described as a 'sculpteur en pâte porcelanique', ibid. p. 21, whereas other well-known artists of this technique, such as Régnier or Choisalat were described simply as 'sculpteur'.