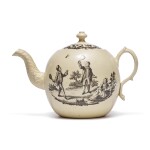 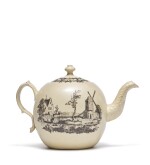 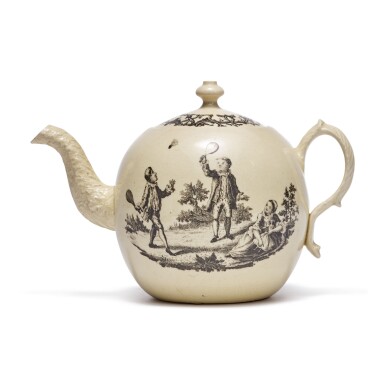 probably Wedgwood, printed in black on the front with a scene of two boys playing 'battledore and shuttlecock', watched by a seated girl holding a doll in her lap, and on the reverse with a windmill in a landscape, set with a foliate handle and cabbage leaf-molded spout, the cover with a scrollwork border.

The cover sits a bit low on the pot and possibly could be matched Otherwise, generally good condition.

This print, apparently unrecorded elsewhere on creamware, also appears on a Caughley or Worcester porcelain cup, formerly in the Norman Stretton Collection, illustrated by Harriet Goldweitz, op. cit. (in Literature above), pl. 30b and sold at Phillips, London, February 21, 2001, lot 68. Although the cup is apparently of later date and the print clearly of smaller size, they are extremely close in the details of the design. The source, however, remains uncertain.

A similar print, but with a fashionably dressed lady and gentleman playing the game, appears in two versions on Liverpool delftware tiles, examples of which are illustrated by Anthony Ray, Liverpool Printed Tiles, 1994, p. 25, no. B4-9 and p. 33, no. C2-2, and which probably derive from designs of printmaker John Bowles' drawing book of 1756-57. A third and quite different version of the subject derives from a Hubert Gravelot engraving and appears on Bow porcelain, for which, see Cyril Cook, The Life and Work of Robert Hancock, 1948, item 9, fig. 1.