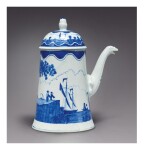 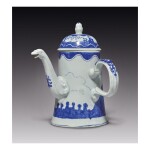 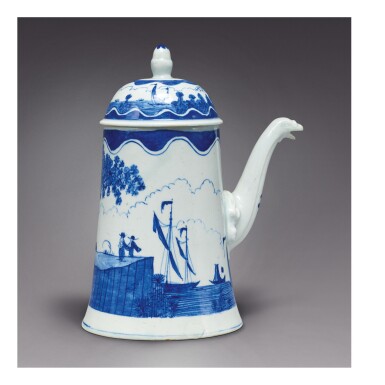 affixed with a bird-head spout with scrolling terminal and a scroll handle, the pot and cover painted with a two-masted sailing ship and figures standing on a quayside in the foreground between blue-wavy borders at the rims, incised letter R to underside of base.

In good appearance and condition. There is a minor faint body crack to one side of the knop on the cover, measuring approximately 2.6 cm.

The pattern appears to be based on a design by the Dutch Delft painter Frederik van Frijtom, and is found on a delft plate illustrated in A. Vecht, Frederik van Frijtom, Life And Work Of A Dutch Pottery-Decorator, Amsterdam, 1968, p.76, pl. 40. The Dutch design later imitated, decorating Chinese and Japanese Arita porcelains. Two porcelain teabowls, one Chinese and the other Bow, are illustrated in Simon Spero, Exhibition 2001, English Porcelain and Enamels 1745-1791, London, 2001, p. 25, pl. 37, who argues that the Bow examples, in turn, were derived from Arita porcelain.